NinjaBeeâ€™s Nutjitsu takes the honour of becoming the Xbox Oneâ€™s first ever â€˜snappableâ€™ game. For those of us who arenâ€™t part of Microsoftâ€™s marketing team, this means that itâ€™s a small enough application to run in the background while watching a film or playing another game, allowing you to then flick back and forth. Playing two Xbox One games at once – how very meta.

Itâ€™s clear from the outset that Nutjitsu has been designed for small bursts of play rather than hour long slogs. It was originally a mobile game and as such each mission takes just a few minutes to complete. So far so good – it makes sense for a snappable game to offer bite-sized chunks of gameplay; something to play for just a few minutes in order to take a break from elongated Destiny loot hunting sessions or while waiting for a multiplayer lobby to fill. 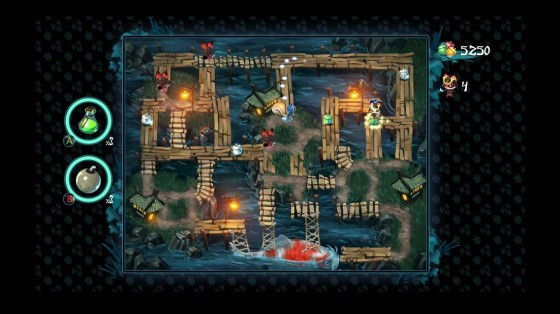 Nutjitsuâ€™s mobile roots are all too apparent, however. The reason why we donâ€™t see many mobile games converted to consoles is because most aren’t substantial enough to match the kind of experiences console gamers are used to. You only need to spend ten minutes with Activisionâ€™s Angry Birds console games to see that. Here, even less.

Nutjistu may be cheap, but it certainly isnâ€™t cheerful

Itâ€™s Pac-Man with mission objectives, pretty much. Try as the developers might, the missions suffer heavily from repetition. The only difference between collecting five nuts of a certain colour and collecting five ninja scrolls is that the but colours alternate every 30 seconds. Then there are missions where nuts have to be collected and placed in a glowing sack that randomly appears in the reasonably attractive oriental mazes. The twist here is that only a handful of nuts can be carried at once. Finally, there are missions in which you simply have to hang around in random â€˜magic squaresâ€™ for sixty seconds upwards – a task that becomes incredibly easy if you remember to stock up on smoke bombs beforehand.

The presence of power-ups fails to induce some much needed variety, and most have shortcomings. The speed boost is useless on harder difficulty settings – which bestow additional XP – as there are so many enemies on screen that whizzing around only leads to an early grave. Smoke bombs that turn the squirrel ninja protagonist invisible give no indication when theyâ€™re about to wear off, and also while using bombs – be it smoke or ice – the squirrelâ€™s traceable footprints remain. Within seconds of these power-ups wearing off the enemies are back on your not so proverbial tail all too quickly. 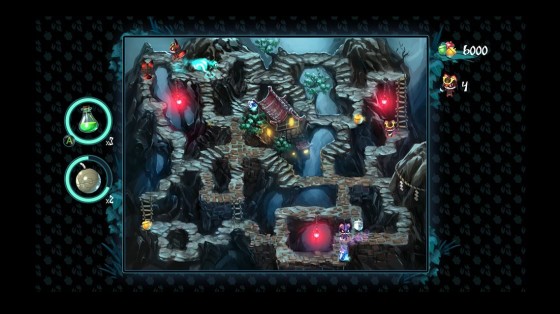 The biggest problem by far though is that thereâ€™s no structure whatsoever. You can simply cycle through missions, picking combinations of mazes and mission objectives as you please. Thatâ€™s to say, thereâ€™s nothing to stop you playing the less elaborate and as such easier mazes over and over again. There is an ultimate goal to aim for, thankfully – to rise up the ranks to become a master squirrel ninja. Level 25 is the cap, which takes around 3-4 hours to reach. The extra mazes and power-ups that unlock as you progress arenâ€™t enough to prevent tedium from settling.

Beating missions on their hardest difficulty level can be quite satisfying, but only because theyâ€™re so ridiculously challenging due to the high amount of enemies. Pac-Man was elegant in its design as there was always a limit to the amount of ghosts on screen. Nutjitsuâ€™s enemies do have attack patterns, but they donâ€™t always work in harmony with one another, resulting in cheap deaths. When there are numerous foes present, those cheap deaths come even more frequently.

Even the lure of some easy achievements wasnâ€™t enough to keep us playing, and thatâ€™s saying something. At just over a fiver Nutjistu may be cheap, but it certainly isnâ€™t cheerful.