Itâ€™s highly likely that Bungieâ€™s initial pitch for Destiny described it as a mixture of Haloâ€™s sci-fi stylings and World of Warcraftâ€™s rich, DLC friendly, role playing universe. It would appear though that during Destinyâ€™s lengthy development period – 2010â€™s Halo: Reach was Bungieâ€™s last release, lest you forget – that original pitch altered somewhat.

We can only speculate as to why. Perhaps Activision felt that a fully fledged MMO wouldnâ€™t appeal to the mass market? Trionâ€™s Defiance flopped, after all. Or maybe the presence of last-gen versions prevented Bungie from realising that potentially glorious combination? This would at least explain why the hub – set inside the last city on Earth – feels so insubstantial, with almost zero scope for exploration. Sure, there are dozens of other Guardians of Earth’s galaxy running around but interactions are limited to meeting players and spontaneously busting out an elaborated dance routine. Well, that and pointing at things. The hub – or Tower, to use its name – does serve a purpose though. Itâ€™s here that bounty quests can tracked and turned in, new weapons purchased, ships upgraded and rare loot decrypted. 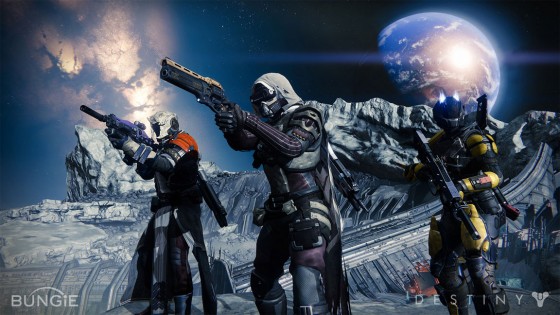 The wealth of character customisation options make a better first impression. For something that’s predominately viewed in first-person, Bungie’s attention to detail here is made even more remarkable. As for character classes, the differences between Hunters, Titans and Warlocks are reasonably few. Again, this suggests that Bungie aren’t quite as experienced with RPG staples as World of Warcraft developers Blizzard.

So, Destiny certainly isnâ€™t Halo wearing World of Warcraftâ€™s shoes. Comparisons with Borderlands and early console MMO Phantasy Star Online are far better suited. That comparison with Borderlands is only a fleeting one, though – loot drops arenâ€™t all that common. Their scarcity helps make them feel that touch more substantial however; rewards for jobs well done, such as taking down a unique enemy with a bounty on their head. Unlike Borderlands itâ€™s also rare to start co-op Fireteam missions alongside other random players. Youâ€™re more likely to see them taking down enemies in the distance, or whizzing past on craft resembling the hoverbikes from Star Wars. Help isnâ€™t always around when you need it, and this can at times make the quest feel like one of solitude. It’s as if saving the galaxy from darkness is entirely up you and your advanced computer companion, when that’s actually far from the truth.

These feelings of solitude are at their most predominant during Darkness Zones in which instant respawns are restricted. As the story progresses the checkpoints during these sections become further apart and ammo scarcer. Theyâ€™re Destinyâ€™s equivalent of playing Halo on Legendary, only here this difficulty setting isnâ€™t optional. For too long have console shooters offered an easy ride, so to play one this challenging is both reassuring and refreshing, especially given Activisionâ€™s previous outputs. 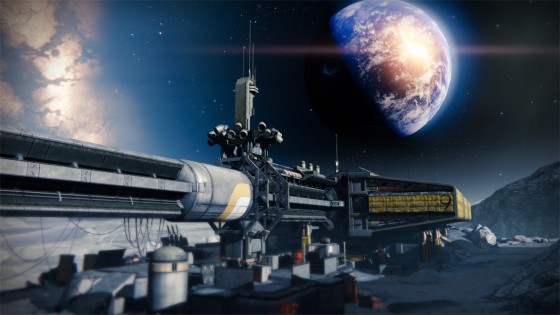 The presence of loot drops has knocked Bungieâ€™s usually tight weapon balancing off-kilter, and also removes the joy of picking up alien weapons and using their technology against them. Thatâ€™s not to say that Destinyâ€™s gunplay is poor. Far from it. It mimics Halo very closely, with the rechargeable shield remaining integral to the experience. Grenades are just as vital for thinning out numbers and never underestimate the destructive force of the melee attack – something that saved our Guardian’s hide on many occasions. The scarcity of ammo for heavy weapons – which vary from rocket launchers to machine guns – forces targets to be picked carefully, adding some rational thinking into the proceedings. The same goes for the devastating â€˜super chargedâ€™ move – activating it just at the right time can take out numerous enemies in one fell swoop.

All these mechanics come together in perfect harmony, and whatâ€™s more Bungie have been brave to explore outside the confines of just one or two enemy factions. Four feature, no less. The Vex – an army of mechanical beasts controlled by one hive mind – are a firm favourite. They also explode in a satisfying manner, with their glowing synthetic innards coating the stunningly rendered environments. Indeed, it wasnâ€™t all that long ago that Destinyâ€™s gorgeous backdrops and surroundings could have been passed off as high-res concept art. The musical score is likewise up to Bungieâ€™s usual high standards, as are the cut-scenes – short and to the point, always leaving you wanting more. The plot’s more intricate details are explained using collectable Grimoire cards, viewable only on Bungie.net. It’s a slightly odd way of doing things – we would have much preferred the chance to view them during the cleverly disguised loading screens.

For too long have console shooters offered an easy ride, so to play one this challenging is refreshing

Similar ‘out of the box thinking’ is on display for pretty much for Destiny’s entire duration. First-person shooters have long borrowed traits from the RPG world, from experience points to unlockable skill trees. Destiny is the first to explore other tropes that only seasoned MMO RPG players will be accustomed to, such as the need to grind to higher levels in order to progress. Also present are astonishingly tough Raids that take hours to complete, and can only be played with others on your friends list. These ideas (the former in particular) may seem alien to those who have never strayed from console gaming. Borderlands notwithstanding, rarely do console shooters request players to revisit previously conquered areas to become more powerful. When reaching Mars – the final stop in Destinyâ€™s planet hopping quest – itâ€™s suggested that only players level 15 upwards should proceed. This is when playing through the optional free-roaming Patrol missions and objective-based Strikes becomes vital. These missions usually begin in already traversed environments before taking you a little deeper into enemy territory or way off the beaten path.

Strike missions are incredibly challenging, putting you up against some of the toughest foes in the game while on occasion the mission objectives are more involving than those in the main campaign. Reaching level 20 mixes up things further in preparation for the â€˜endgameâ€™. Itâ€™s once this level has been reached that focusing on daily and weekly missions, joining different factions and hunting for secret coins becomes crucial to hit the level 30 cap, changing the state of play entirely. Make no mistake – thereâ€™s lots to discover once the 10-12 hour story has been completed. 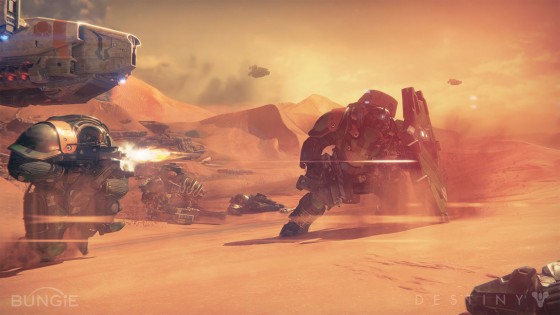 Another way to rise up the ranks is to face other Guardians in the Crucible – Destinyâ€™s competitive mode. This doesn’t unlock until a few hours in, and even then not all match types are initially available. All weapons and skill unlocks are carried over, meaning experienced players have a hefty advantage. Thankfully newcomers aren’t entirely left without a leg to stand on – heavy weapon ammo regenerates regularly, allowing rocket launchers and machine guns to be used by those who reach ammo supplies first. Grenades and ‘super charged’ attacks recharge slower here than in the main campaign yet are still able to strip a shield down to nothing or even kill with one hit. Fans of Halo’s multiplayer modes will also no doubt be pleased to hear that vehicles and gun turrets feature on certain maps too. The pace is slightly more sensible – crazy ragdoll physics and outlandish weapons such as the gravity hammer are out – and it’s a sturdier experience overall because of this, even with far fewer options and limited scope for customisation.

Destiny is an elegant shooter, for a more civilised age. Not as clumsy or random as a blaster. It offers a vastly different experience to other shooters out there, and in a genre as sorely stagnant as it is, unique experiences like this are few and far between. Those hoping for â€˜Call of Duty in spaceâ€™ should wait until such a thing inevitably exists.