As much as we admired Disney for taking on the juggernaut that is Activisionâ€™s money making Skylanders franchise, the original Disney Infinity left a lot to be desired. A surprisingly high amount of additional figures could only be used in the Minecraft-inspired Toy Box mode, and despite the â€˜Infinityâ€™ in the gameâ€™s title characters couldnâ€™t cross worlds. Not only did this mean Jack Sparrow roaming the halls of Monsters University was out of the question, but it also meant that players (parents?) had to cough up for at least one extra figurine to play an adventure mode with two players.

The good news is that Disney Infinity 2.0 is a lot less restrictive when it comes to crossovers, minus the fact that ten â€˜crossover coinsâ€™ have to be collected before characters can jump worlds. The bad news is that only one adventure mode is available out of the box, as opposed to the originalâ€™s three. Itâ€™s the Avengers that Disney Infinity 2.0 favours, with Iron Man, Thor and Black Widow packed in along with the Avengers playset.

Two power discs are included as well, each unlocking a mini-game created using Toy Box assets. Escape from the Kyln is a top-down RPG, while Assault on Asgard offers a spot of tower defence. 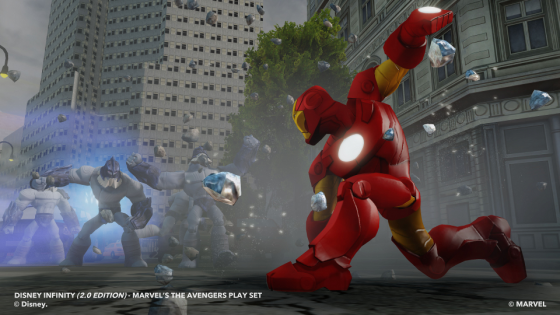 The plot for the Avengers playset entails Loki storming New York with an army of Frost Giants, starting with a short tutorial sequence set inside Stark tower. Here J.A.R.V.I.S teaches the ropes before sending your chosen hero out onto the city streets to pick up missions at will. There are comparisons to be had with the originalâ€™s Incredibles city-based playset, only everything is a lot bigger in scope and scale. Visually itâ€™s far slicker too – right across the board, in fact. The stylised characters are well animated and look the part, each retaining their charismatic personality. Fans will no doubt be pleased that a few lesser known characters show up to hand out missions, including Captain Marvel and Wasp. Nick Fury is likewise present with Samuel L. Jackson reprising the role.

Considering theyâ€™re pack in characters, Iron Man and Thor are much of a muchness. Thatâ€™s to say that they have very similar attacks and unlockable skills, including the ability to fly through the air at high speeds and attack using projectiles. Black Widow of course lacks the power of flight, having to resort to elevators and glowing blue springboards to reach higher areas. After being knocked off the top of a tall building for the umpteenth time while attempting to destroy one of Lokiâ€™s ice generators, we soon went back to playing as Iron Man. 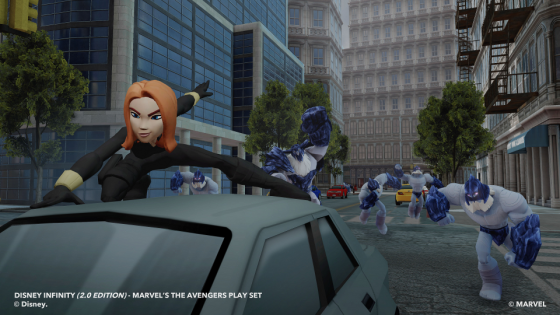 Incidentally, infinite repsawns are out. Borrowing an idea from Skylanders, characters now act as lives and have a short â€˜cool downâ€™ period until they can be used again following defeat.

only one adventure mode is available out of the box, as opposed to the originalâ€™s three

The biggest problem with the Avengers playset, and by quite some margin, is that the mission objectives are both clichÃ©d and repetitive to the extreme. It says something when youâ€™re glad an escort mission is on the agenda over yet another quest to find and destroy a generator. And when youâ€™re not destroying generators, youâ€™re setting them up and protecting them. Thankfully optional missions do offer a change of pace, including motorbike races and balloon popping mini-games.

Combat too suffers from repetition, clearly kept simple to suit the target audience – very young Marvel fans. The focus is on style over substance – with just one button used to attack – and although there is a block button we found that blocking was rarely required. The special moves are quite the spectacle to behold, but again this falls back to the style over substance ethos. Additionally, and boss appearances aside, the amount of enemy types found in the Avengers set can be counted on one hand. 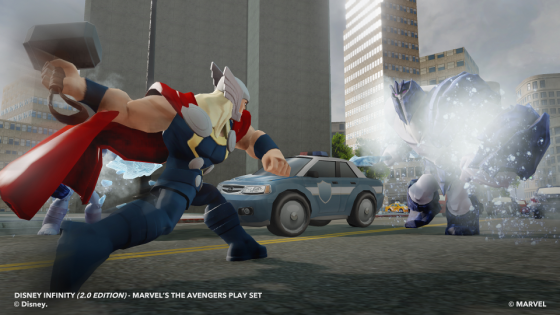 Although the Avengers playlet takes longer to play through than the three-hour romps found in the original, we have to admit to enjoying the Pirates of the Caribbean and Monsters University playsets more. These had a stronger dose of â€˜Disney magicâ€™ about them – here most of your time is spent simply travelling to different parts of a city to defeat yet another batch of Frost Giants. The few indoor sections fail to add any variety, with the first two simply set in dull warehouses. Flashy particle effects and destructible environments couldnâ€™t stop tedium from setting in way before the final confrontation.

And so it falls to the new and improved Toy Box mode to pick up the slack. The included power discs provide good examples of what can be built – and shared online – using the Toy Box mode. Theyâ€™re also decent mini-games in their own right. Younger gamers may however struggle to create games of their own, despite the presence of a tutorial. Logic gates and switches have to be placed and connected; itâ€™s quite easy to overlook something or place the gates in the incorrect order. 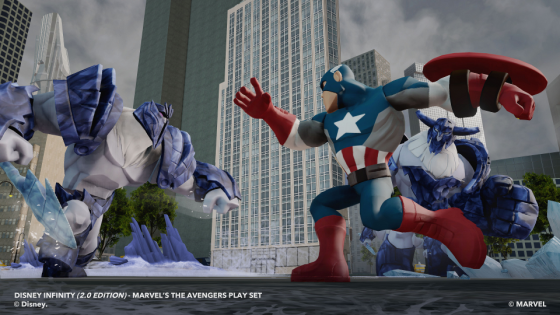 Another new Toy Box addition (and quite a baffling one at that, given the source material) is an interior design mode. Presumably Disney wanted to offer something similar to The Sims, giving the chance to create houses and furnish them with bits and pieces from the Disney universe. The sight of Iron Man running around holding a magic wand – the tool used for changing wallpaper and such – is something we never expected to see.

Overall, Toy Box mode is a marked improvement, proving to be quite the time sink. Itâ€™s just a shame that developers Avalanche couldnâ€™t think of anything exciting for the Avengers to do other than stand around protecting/destroying generators and fighting untold amounts of enemies. Will the additional playsets – Spider-Man and Guardians of the Galaxy – offer more variety? Only time, and money, will tell.