Back in 2003, Sega took EA to court, claiming The Simpsons Road Rage was uncannily similar to Crazy Taxi. How times change – this free-to-play release is almost identical to EA’s Peggle, right down to the way the camera zooms in and a drum rolls plays when the ball nears the final peg.

Developer Three Rings has attempted to add new ideas, but they ruin the simplicity of the basic concept – to break every coloured peg by firing balls from the cannon located at the top of the screen. 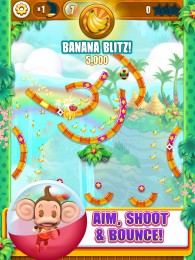 These ill-conceived ideas include a handful of power-ups that lack the elegance of those seen in PopCap’s classic – one is simply a homing rocket that’s aimed manually by tapping anywhere on the screen, while the ‘Super Bounce’ move once sent our monkey bouncing around for such a prolonged period that our iPhone’s screen dimmed.

In an attempt to add variety, some levels feature enemies and the occasional boss battle. With each enemy requiring multiple hits to kill – and only seven balls at your disposal – more often than not itâ€™s luck thatâ€™s required over skill. This is especially the case during levels that have as many as five enemies to defeat.

This wouldn’t be such an issue if the physics engine had a degree of predictability about it. When trying to master Peggle, you soon became accustomed to the ball physics and could start to plan shots in advance. Here, it’s just a case of firing and crossing your fingers while the balls haplessly bounce around from one side of the screen to the other, hitting bombs, springs and other objects placed seemingly at random. It really highlights how much time and attention PopCap put into their level layouts. In comparison, the differences in quality and consistency are jarring. 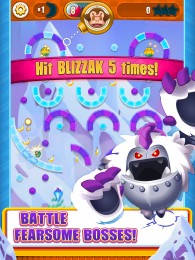 The presentation is similarly sloppy. Character animation looks cheap and crude – during one cut-scene we observed AiAi’s head slowly drifting away from his body. And yes, that sight was as disturbing as it sounds. Another issue we experienced involved a message regarding power-ups that simply wouldn’t vanish from the screen – tapping it did nothing but fire balls out of the canon, now in the background, wasting lives in the process.

Valuable lives, at that. Once depleted there’s a short while to wait or you can pester friends for more. As a free-to-play game, there’s an in-game currency as well – gold bars, which are used to buy power-ups and unlimited spins on a slot machine that coughs up new costumes and such.

Those that can look past Monkey Ball Bounce’s quirks and design faults will find that AiAi’s quest to rescue his friends is a lengthy one, and with more levels promised, but answer us this – why settle for a cheap imitation? The lure of Sega’s cute and colourful simians simply isn’t enough.