As a free download intended to promote the upcoming Michael Bay movie, the question we need to answer here is not in regards to value for money but if it’s worth wasting valuable time on. If you have a hankering for some easy achievements, then the answer is yes. Low budget and bare-boned, this is about all the Kinect-only TMNT Training Lair has to offer.

We were hoping for something similar to Half Brick’s masterful Fruit Ninja Kinect, but instead what we have here are five extremely short score-based stages that can be beaten by frantic arm waving and little more. Wooden boards have to be broken and statues smashed while dodging the occasional shuriken and mutagen canister (oddly referred to as “bombs”). Pizzas that significantly boost your score fly across the screen at the end of each round – moving your head over these to “eat” them is critical to beating a stage’s target score. Curiously, the US version featured Pizza Hutt branded boxes – these are absent for the UK.

Each training lair places a different weapon in the hands of your on-screen augmented reality self. This doesn’t do much in favour for variety, as no new hazards or breakable objects are introduced after the first stage. 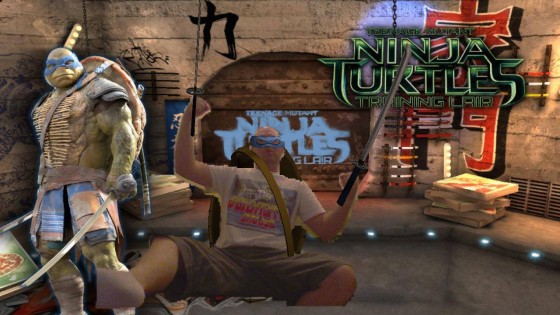 Donatello’s staff and Leonardo’s swords have such a wide reach that it’s almost impossible not to hit every target. Raphael and Michelangelo’s on the other hand generate a couple of minor problems. Raphael’s sai can be thrown but the method so clumsy that it proves a challenge to hit the objects that fall down the far side of the screen. Mike’s constantly spinning nunchaku meanwhile have a habit of cracking open the mutagen canisters you’re meant to avoid.

If you’re hoping to squeeze 400/400 Gamerscore out of this, it’s likely that the achievement for not hitting any canisters during the game’s duration – a paltry ten minutes – is the one that’ll give the most trouble. Another achievement for breaking every single object can also take time due to Raphael’s wayward sai slinging. Achievement hunters, if nobody else, will be pleased to hear that the stages aren’t randomised.

As it’s intended to be a promotional tool some not so subtle reminders of the movie’s release date are constantly shoved in your face. A few other achievements are based around sharing photos on Facebook – something that’s bound to irritate those on your friend list.

At least the main menu is easy to navigate and the motion controls work well enough. We also approve of the fact that it can be played sitting down. These are about the only positive points we can muster. Save for still images on the aforementioned photos, the Turtles themselves aren’t even present. Given the frosty reception of Michael Bay’s radically overhauled ninja teens, perhaps that could be seen as a positive too.