Digital Extremes has worked on numerous sci-fi shooters in the past, varying from early Xbox 360/PS3 release Dark Sector to the slightly more recent Star Trek tie-in. Theyâ€™ve contributed online multi-player components to some big-name games too, including Bioshock 2 and Homefront. The experience the studio has gained over the years is notable right from the Warframeâ€™s outset – itâ€™s a sturdy third-person shooter with a rich sci-fi lore. So rich, in fact, that the first hour or so isnâ€™t so much about mastering the slightly wayward control system but getting your head around Digital Extremesâ€™ lexicon of sci-fi terminology.

The opening hour does a brilliant job of drawing you in, even if some of Warframeâ€™s finer points are left untouched. Weâ€™d wager this isnâ€™t without reason – a little bit of self-discovery can go a long way, as Dark Souls once (well, twice) proved. In short: youâ€™re bestowed control of a Tenno – an intoxicatingly rare and desirable war machine, forged from ancient technology. The recently exiled Captain Vor seeks to own a Tenno of his own, in order to use their mythical innards to restore the decaying and diseased Grineer army back to a former glory. Captain Vorâ€™s fall comes after just a few missions, and itâ€™s between these the workings of the spaceship hub, armoury and forge – in which new items are crafted – are explained. 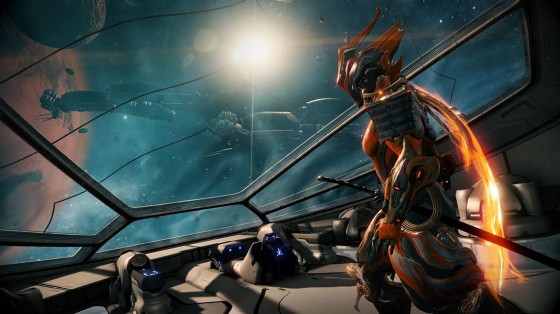 Vorâ€™s demise is not the end; itâ€™s just the beginning. Once defeated, the star map opens up to reveal dozens of missions spread all over the galaxy. The variety in mission objectives is admirable – everything from survival modes against countless foes to a â€˜capture the baseâ€™ mode competing against the dumb but relentless enemy AI.

We canâ€™t be quite so positive about the variety of environments however. The fact that some settings are frequently reused isnâ€™t a major issue, given the amount of missions at hand, but their sheer size is. The Tenno can move at high speeds, so to accommodate the levels are far larger than those seen in last-gen shooters. However, memorable landmarks are seldom seen. The outdoor environments with pools of water and leafy foliage fair better – and immeasurably so – but more often than not youâ€™re running down dull industrial corridors in what can only be described as huge sprawling mazes. This also results in one mammoth trek to the evac point once a mission has been successfully completed. Next-gen sheen simply isnâ€™t enough to mask the dullness of its copious corridors. 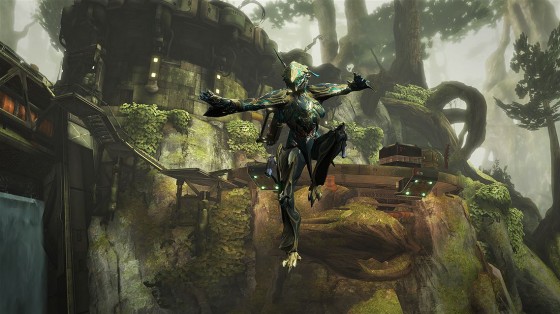 The wall running mechanic – seemingly pilfered from Titanfall – falls flat too. It simply cannot be relied upon to escape from harm in a hurry. In places where itâ€™s essential to wall run to reach a new area itâ€™s not uncommon to witness your fellow teammates repeatedly back-flipping to the ground until they finally manage to clamber up to their next destination. Couple this with the fact that the controls are far from tight – at times the Tenno feel disconnected from the world around them, seemingly skimming across the ground rather than running along it – and youâ€™re left with a control system that youâ€™re often forced to wrestle with.

At least the online matchmaking works well, with surprisingly little downtime between quests. Youâ€™re automatically placed into a squad with three others and then left to vote on what to missions to tackle from the comfort of the spaceship hub. If somebody leaves the squad, then a replacement partner is soon found. Missions commencing with anything less than the four man quota are uncommon. Handy too, seeing that the survival missions need some serious firepower to make it to the final wave. Incidentally, although there is a choice of three different Tenno – with more unlockable later on – it would appear that a team with mixed skill sets isnâ€™t essential for success. Every Tenno can heal the fallen, and each can unleash a move that causes a considerable damage once the energy meter is full. 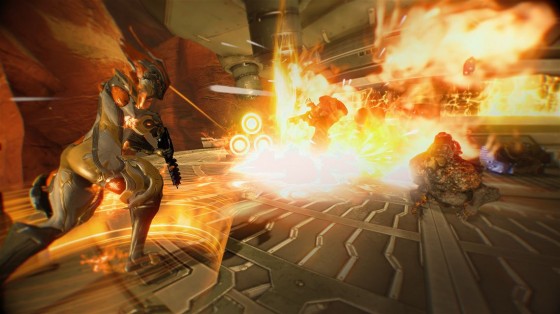 Letâ€™s go back to firepower for a moment, as this is the focal point of Warframeâ€™s in-app purchase system. As a free-to-play release, Digital Extremes are proud to say that every single item can eventually be unlocked for free. You will however have to put an awful of a lot of time in. Weâ€™re talking hundreds of hours.

Platinum is the purchasable currency with IAP staring at Â£3.99, increasing to an eyebrow raising Â£89.99. Although you do start with a small amount of Platinum, chances are that most players will blow it all on essential revive consumables. The second in-game currency is plain old credits, gained at the end of each mission and from loot drops. These are used to purchase blueprints for the item forge, requiring raw materials – of varying scarcity – to create. And who controls the rate that these rare material drop? Digital Extremes does, of course. Youâ€™re more likely to unlock the achievement for playing for ten hours before successfully forging a new main weapon, such as a rifle or shotgun. 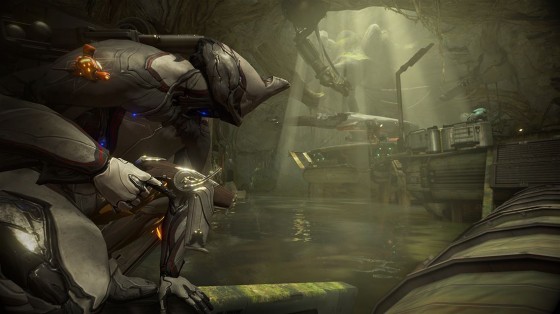 Imagine playing one of the countless third-person sci-fi shooters released over the years, but the few weapons you start with are the only ones you get during the gameâ€™s ten hour duration. For those not willing to invest, thatâ€™s a rough description of Warframe. Weâ€™ve used the word â€˜roughâ€™ there as there are weapon mods, two or three of which are usually acquired per mission. These mods can increase reload speeds or clip sizes, while mods for the Tenno can boost resistance. Duplicate mods can be sold or amalgamated together in chance of crafting something new – a small touch, but one weâ€™re quite fond of.

Warframe is an easy game to like – thereâ€™s a lot of gaming mileage here, and all for the outlay of sweet nothing. It mimics its peers in a competent enough fashion, and we also approve of the focus on co-op play, thus instantly removing the problems that plague Warface and similar F2P shooters. Chiefly, the fact that thereâ€™s always going to be somebody on the battlefield with a bigger, more powerful, gun. The fact that there is also PvP mode tucked away (known as Conclave, and only accessible to high class Tenno) shows how eager Digital Extremes has been to please, but despite their good intentions itâ€™s still a very hard game to love. A partial success, then.