This month sees the release of Warner Brosâ€™ Gauntlet remake. The PC exclusive dungeon crawler looked a little underwhelming when it was first unveiled, but the latest trailer would suggest that it has come a long way since, retaining many ideas and features that made the arcade original such a classic. 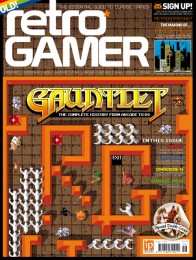 At the time of typing thereâ€™s not even the faintest whiff of a rumour that itâ€™s heading to consoles. Should it fail to appear on the likes of PSN and the Xbox Store, it wonâ€™t be the first time that console gamers have missed out on the chance to play a shiny new Gauntlet.

Back in 2008, Eidos licensed the Gauntlet franchise from Midway for a Nintendo DS update. Eidos made the wise choice of Backbone Entertainment for development duties, a studio thatâ€™s well-versed in all things retro having handled such properties as Street Fighter II, Sonic the Hedgehog and Bomberman in the past.

Backbone opted to make use of both the DSâ€™s screens, rather than placing a dull map, inventory or such on the touch-screen, and also decided on 3D character models over 2D sprites. 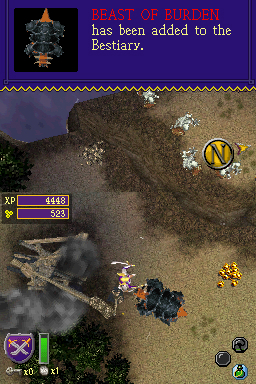 Their revamp was finished and even reviewed in a handful of magazines – such as issue 56 of Retro Gamer, which had a special pull-out Gauntlet cover – but sadly the game never made it to store shelves. That issue of Retro Gamer also featured an advert on the back cover, suggesting that Eidos pulled the plug at the very last minute.

Retro Gamerâ€™s Darran Jones handed out a glowing 81%, while US publication Nintendo Power gave it 75%, praising its steady mixture of â€œold-school mentality and modern game-designâ€. The Official Nintendo Magazine UK on the other hand wasnâ€™t too taken with it, dishing out a mediocre 53%. Itâ€™s doubtful that this was the reason for the gameâ€™s cancellation however. Publishers sending their games to the digital scrapheap because of one poor review is something weâ€™ve never heard of, certainly.

Although Eidos was publishing, an interview with Backboneâ€™s Bill Schmidt claimed that Midway was still had involvement with the title, giving feedback on the new features the developers wished to include. 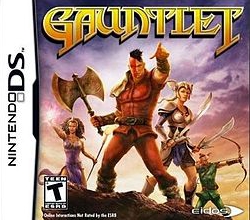 Arguably, the chance to play alongside three others was what made the arcade original such a hit – bickering over loot and sharing tactics while crowding around an arcade cabinet brought gamers, no matter their age, together. As such, Backbone made both online and local co-op play a top priority. Third-party Nintendo DS titles with online play were vastly uncommon, making this is a bigger deal than it may initially seem. In addition to a four player co-op mode, capture the flag and deathmatch modes were included and with voice-chat capabilities to boot.

Due to the focus on online play, players were no longer constrained to a single screen and now free to explore the maps at their own free will. Puzzles were also included to prevent the endless hacking and slashing becoming tedious. Standing on pressure plates to open doors for other player is one example mentioned in Retro Gamerâ€™s interview. 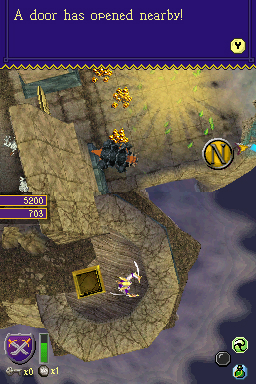 Those expecting to find a wealth of RPG elements would have been disappointed however – there were no stats or similar RPG tropes to play around with. Runestones that could bestow new powers did feature, but Retro Gamerâ€™s review notes that these were few and far between.

Another new addition would have been the ability to strafe while firing projectiles. Retro Gamer found this idea a very disorientating, at least initially, as the camera spun around while firing. It would appear though that a fixed camera – rather than a â€˜precision cameraâ€™, as it was known – was an option.

Gauntletâ€™s October 2008 release date came and went. Many assumed that it had simply been delayed but then in February 2009 rumours of cancellation began to surface. In June 2009 it was believed that Majesco Entertainment had picked the title up, as spotted in a rating on the ESRB website. Alas, this was the last we ever heard from it, save for the fact that the engine was recycled for EAâ€™s G.I. Joe: The Rise of Cobra movie tie-in. We can only speculate as to why it was cancelled, but the fact both Eidos and Midway were having internal difficulties at the time no doubt played a role.

Somebody somewhere still has hope however – the gameâ€™s Wikipedia page, last updated just a few months ago, still reports that it â€œmay have been cancelledâ€. Itâ€™s about time that statement was changed to â€œgone but not forgottenâ€.