“An incredibly elaborate Lemon Jelly video with inflections of The Mighty Boosh.” I thought that was a suitably clever opinion about Hohokum, around which I could build a review. But it turns out that’s not really an opinion, so much as background information.

The character you control, essentially a snake, is called the ‘Long Mover’, which I thought sounded like something Bob Fossil from The Mighty Boosh would have come up with. That’s because he did come up with it – and that’s where they got the name from.

So background information that may be, but it’s still instructive: like those influences, Hohokum is abstract and strange, which isn’t going to be to everyone’s taste. And that’s not just on the surface.

Hohokum is about exploration and interaction. Nothing is ever explained, so it’s only by investigating each of the areas that it slowly becomes apparent what you can ‘do’ there. That might be piecing together a rollercoaster train, or helping guests to enjoy a party. Whatever it is, you know you’ve done it when a cut scene introduces you to a fellow Long Mover, who then joins you in that area.

Your interaction is limited – moving around faster or slower, bumping into things, occasionally picking up a passenger or several – and without any meaningful signposting, it’s not a game you can rush through. There are lots of other events to be triggered, that are either incidental, or I’m too stupid to piece toegether into something more meaningful. 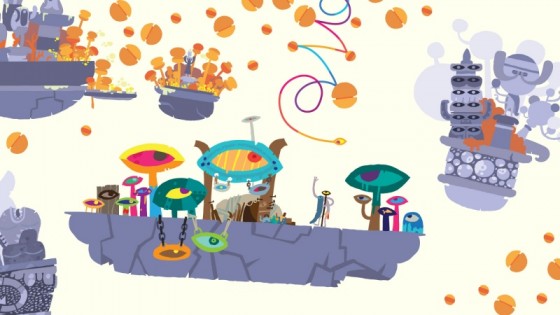 I was forced to think about that early on when a casual onlooker asked, “Do you actually know what you’re doing?” I didn’t, but it didn’t matter. Simply exploring the game’s abstract and strange world is an enjoyable way to spend time, thanks to the constant feedback you get from just moving through the environments. Progress, for what it’s worth, tends to follow in due course.