For a third week running Nintendoâ€™s eShop roster is taking us back to the past. Thatâ€™s to say, itâ€™s another week filled with Virtual Console releases and very little else. 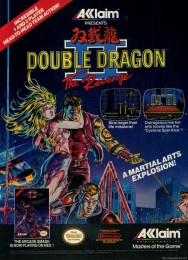 On Wii U VC thereâ€™s HALâ€™s cult classic puzzler Adventures of Lolo (Â£3.49) and also the equally classic scrolling brawler Double Dragon II: The Revenge (Â£3.49). Acclaim published Double Dragon II back in the day; with that publisher long gone, youâ€™ve got Arc System Works to thank for this re-release.

3DS owners meanwhile are being treated to yet another Mega Man game – the Game Boyâ€™s Mega Man 4 (Â£3.59). Mega Man 3 was re-released last week and Mega Man 2 the week before. As such, logic dictates that weâ€™ll soon be on the receiving end of Mega Man V.

As for the weekâ€™s discounts, Nano Assault Neo and Chasing Aurora on Wii U drop to Â£6.70 and Â£2.99 respectively while Nano Assault EX on 3DS falls to Â£6.35. On-rails shooter VAN HELSING SNIPER ZX100 likewise gets a cut, from the highly amusing price of Â£6.66 down to Â£2.69. Well, that puts a temporary end to that joke doesnâ€™t it?