Released in 2012, Wordament was Microsoftâ€™s first iOS game to feature Xbox achievements. Although it wasn’t much of a looker, all kinds of technical wizardry was going on behind the scenes – every two minute match was played online, with scores shown on a leaderboard at the end. Sequel Snap Attack takes everything that made Wordament one of the most addictive word games around and gives it a good polish and a new twist.

The original was based around forming words from a 4×4 grid. This sequel however has more in common with Scrabble, including score multiplier tiles. 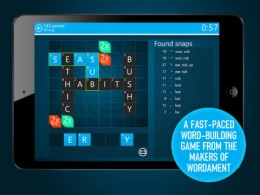 The â€˜snapâ€™ part of the gameâ€™s subtitle comes from the fact that every match has two, or sometimes three, words already placed on the grid. The idea is to then â€˜snapâ€™ seven letter tiles onto these pre-placed words to make new ones.

Itâ€™s a simple idea, granted, but itâ€™s one that allows for a far richer experience. In Wordament we sometimes struggled to find new words towards the end of the match, having exhausted our lexicon. Here, we often find ourselves still forming words right until the very last second. Snap Attackâ€™s larger scope is evident in the leaderboards – scores are vastly higher.

Like before, Snap Attack is played online. There are no lobbies or such – play is continuous, with one game commencing thirty seconds or so after the previous ends. During match downtime all possible words from the last game are shown as well as a leaderboard which offers the ability to track the scores of your “Frenemies”.

Regrettably, Wordamentâ€™s biggest fault rears its head again here – youâ€™re still placed into games with mere seconds left on the clock, forcing you to then twiddle your thumbs until the next match starts. That said, it’s hard to see how the developers could have prevented this without having to resort to a traditional lobby set-up. This is a continously played game after all.

Perhaps we should just be grateful that there are no intrusive in-app purchases – this is free-to-play done the right way. Small adverts appear at the bottom of the screen, but they arenâ€™t distracting in the slightest and thus easy to ignore. Not once did we accidentally tap on one, weâ€™re pleased to report.

Xbox achievements round this polished package off nicely. Ten in total, worth 50G. Half of those come easily, likely to unlock during your first couple of matches. The other half takes a while, such as the achievement for playing 100 rounds. Another, somewhat ingeniously, entails making words in certain shapes. A helpful chart found on the main menu screen shows which shapes youâ€™re yet to make.

Fast-paced and demanding, Wordament: Snap Attack improves on its predecessor in every possible way.