For us, Nintendoâ€™s Virtual Console platforms arenâ€™t so much about reliving our misspent youth but rather experiencing the games we missed out on first time round. 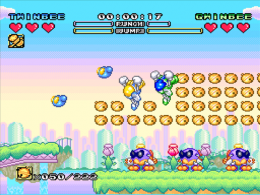 Pop’n Twinbee Rainbow Bell Adventures is one fine example – Konamiâ€™s Super Nintendo platforming sequel received rave reviews back in the â€˜90s, but we were never able to track down a copy. As such, weâ€™re pleased as punch to see it making its way onto Wii U VC this Thursday.

It entails robotic trio TwinBee, WinBee and GwinBee taking down giant bosses with their huge metallic fists and indulging in some traditional – and not so traditional – 2D platforming. Konami were even kind enough to throw in a head-to-head mode for good measure. Fans may be interested to hear that the aspect ratio has been fixed for this VC release.

A few other titles are joining Popâ€™n Twinbee (and GwinBee) on Wii U this Thursday.

Thereâ€™s the retro-influenced shooter XType Plus (Â£2.69) – which boasts a procedurally generated difficulty level – and Ice Cream Surfer (Â£4.49) which appears to be a webcomic turned into a 2D shooter. Featuring 16-bit style visuals, it sees titular hero Ice Cream Surfer taking on an army of vegetables who are out to destroy the ‘Flavour Galaxy’. Why? Because theyâ€™re angry about kids loving ice cream and hating vegetables.

Sticking with the retro theme, thereâ€™s Midtown Crazy Race (Â£4.49). In the developerâ€™s own words: â€œThis game is a tribute to the car games from late 90sâ€. Sadly, it would appear to resemble the likes of London Racer and other notoriously poor PSone racers, rather than the likes of Ridge Racer and similar much loved classics. They have at least managed to get 32-bit visual style bang on. That’s…something. 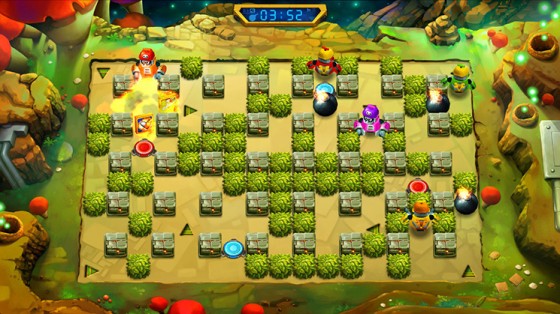 Bombing Bastards – and yes, thatâ€™s really what itâ€™s called – is the final Wii U release of the week. This too has retro running through its veins, resembling the almighty Bomberman. It features a five player mode, boss battles and over 30 different battle arenas. Weâ€™d wager that this one is worth a look. 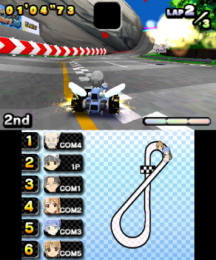 Over on 3DS, mobile sliding puzzler 2048 is making a very welcome appearance and at a mere Â£1.19 to boot.

If racing is more of your thing – and youâ€™ve rinsed Mario Kart 7 for all its worth – then you may be interested in Family Kart 3D (Â£4.49). Ignore the dull name as believe it or not this is from Arc System Works, of Guilty Gear and BlazBlue fame. Nintendo Life found it be a good, if straightforward, clone of Mario Kart 64.

LEGO Ninjago: Nindroids (Â£34.99) is also heading to the 3DS eShop – and just in time for this Fridayâ€™s retail release – while a demo of puzzler Quell Reflect is due on Thursday.

As always, there are quite a few discounts on both Wii U and 3DS eShops. Nothing that hasnâ€™t been reduced before, mind. Highlights include Trine 2: Director’s Cut and TNT Racers – Nitro Machines on Wii U at Â£5.49 and Â£4.49 respectively and Rage of the Gladiator on 3DS for Â£3.09. Thereâ€™s also Crazy Kangaroo for 89p, which received a mixed reviews upon release. At less than a quid, you may want to give it a try.