If you browse Xbox Liveâ€™s â€˜Games on Demandâ€™ service regularly you may have seen that Iron Sky: Invasion was recently added. This movie tie-in is one that weâ€™ve never seen in the likes of GAME and CeX, despite it allegedly receiving a UK retail release. The 2012 movie on which itâ€™s based is arguably just as little-known.

Chances are though that both the game and film are slightly better known elsewhere in Europe – all of the review quotes on publisher TopWaresâ€™ site are in German, and it also received the collectorâ€™s edition treatment elsewhere in the world. The GÃ¶tterdÃ¤mmerung edition came with a copy of the film on DVD and a few other bits and pieces. 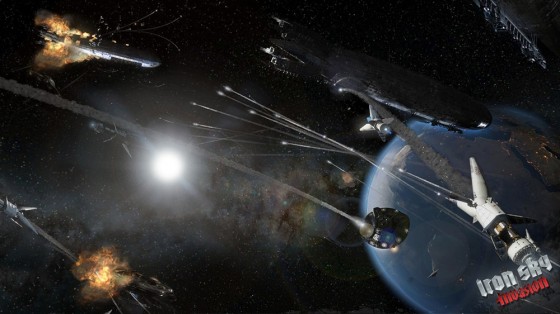 Itâ€™s a space combat simulator (to use the word lightly), set in an alternative universe where the Nazis managed to perfect space travel. Theyâ€™ve spent the last 70 years building a base on the moon, amassing a vast armada to unleash onto the world when itâ€™s least expected. As a combat pilot, this is where you come in.

Itâ€™s fair to assume that Iron Sky: Invasion didnâ€™t have a colossal budget. This actually works in the gameâ€™s favour – the FMV mission briefings have a pleasingly trashy feel to them. Characters are heavily stereotyped; the actor’s facial expressions are over-exaggerated as they deliver clichÃ©d dialogue. Theyâ€™re like something out of Sewer Shark, Night Trap and other notoriously poor FMV games from the early â€˜90s.

The music too helps to create an atmosphere. When docking at one of the various space stations – each of which belongs to an allied nation – some rather out of the blue music begins to play. Dock into the US space station, for instance, and a softly sung rendition of the American national anthem can be heard. Considering we were expecting this to be a po-faced shooter, it took us by surprise somewhat. 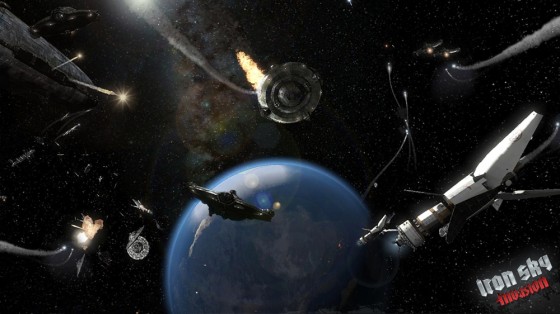 Being a movie tie-in and all, the difficulty level is pretty casual. Youâ€™ll soon learn not to attack the bigger enemy craft until upgrading your ship a few times. Come back with increased firepower though, and theyâ€™ll go down relatively easily. Docking is handled automatically – simply approach a space station slowly and press a button when in range – and itâ€™s also possible to engage autopilot when gunning enemies down. Ammo recharges after waiting a few seconds – this energy can also be transferred into the engines to get around space quicker, or boost shields if under attack.

Itâ€™s clear that a lot of effort has gone into the design of the crafts. Debatably though it was the movieâ€™s production studio who put this effort in, rather than developers Reality Pump. The design of World War II aircraft was clearly a huge influence – one of the larger craft in the Nazi fleet resembles a Zeppelin blimp. Each nation has their own craft too, with the UK offering the chance to fly their modern-day Spitfire not long into the game. It may not resemble one, but it can gun down enemies in the blink of an eye. 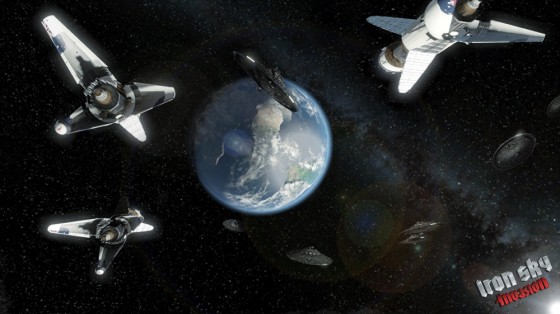 Optional missions pop up frequently and can be tackled as you see fit. The constantly updated starmap makes it easy to keep track of missions as well as impending assaults on Earth – fail to engage the enemy before they enter our atmosphere and your reputation takes a hit. A slight political theme features as well – other nations will offer work on the sly, such as capturing satellites for the Russians. Get on their good side and upgrades will be discounted at their docking station. Salvage prices can also differ from one station to the next. This is hardly what we’d consider in-depth resource management, but at least the thought was there.

Iron Sky: Invasion is far from being a classic, but it gets the fundamentals right and it left more of a lasting impression on us than most movie tie-ins do. Weâ€™d still recommend fellow little-known space shooter DarkStar One over this, but when it comes to unexpected streaks of daftness Iron Sky: Invasion delivers.