Those who never played Sniper Elite V2 may be under the impression that it was just another shooter. In reality, that couldnâ€™t be further from the truth. As well as an X-ray kill cam, showcasing the entry and exit of every bullet in grizzly detail, it was also vital to both plan ahead and cover your tracks. The thinking manâ€™s third-person shooter, it rewarded patience like no other.

With a relatively short 18 month turnaround, Sniper Elite 3 does bare quite a resemblance to its predecessor. Of the two though, this is the far superior game. The sniping mechanics have been honed and tinkered with and the environments are now larger and more open. The fact that there are only eight missions shouldnâ€™t cause concern, as each takes a good two or three hours to bring to a close. Theyâ€™ve been designed with replay value in mind too, frequently taking the focus away from sniping with optional side missions such as destroying ammo dumps and locating weapon blueprints. 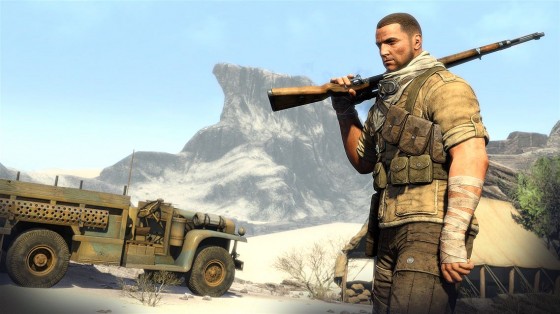 Set in 1942, the war-torn city streets have been left behind in favour of dusty African plains. That means plenty of sun, sea and sand. Well, maybe not that second one. After the brief, explosion heavy, tutorial mission is out of the way the first main mission – centred around a large oasis – does a superb job of drawing you in. Due to the sheer size of the environments, almost every objective can be reached in numerous ways. As such, this is a game that both encourages and rewards exploration.

Stray from the beaten path and you may come across a sniper nest, or a supply of invaluable explosives. Trip wires and landmines can be placed for enemies to blindly walk into, while starting a small fire on top of a block of dynamite, and then observing enemies cautiously approach, is another constant source of amusement. Rocks can also be thrown to cause a distraction, giving the chance to sneak behind enemies to perform a stealth kill. The loadout screen gives the chance to take as many explosives into battle as you deem necessary. Weapon upgrades, incidentally, are not simply found lying around but are instead carried by certain enemies. Using binoculars to tag foes can reveal if somebody is carrying something of use, as well as assist in keeping track of their location. 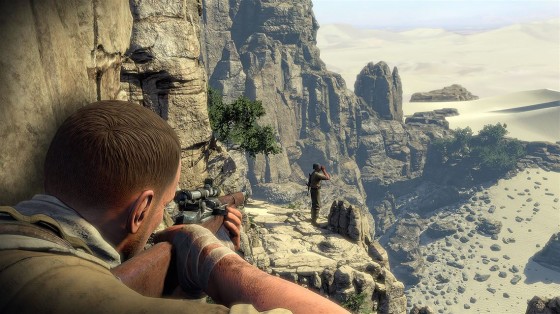 AI routines do get a little predictable, but regardless the German adversaries put up a remarkably good fight. Once alerted to your presence theyâ€™ll head towards your last known location, climbing ladders and even jumping across rooftops if need be. Theyâ€™re alerted by both movement and sound – gunfire, especially – but in most locations there are objects nearby that can be used to mask the sound of the protagonistâ€™s trusty rifle. Handguns and machine guns feature also – itâ€™s possible to take down two or maybe three enemies with the latter when making a swift getaway but due to range and spread they can’t be relied on too heavily, thus keeping the emphasis on sniping.

As engaging as the sniping mechanic is, with its realistic ballistics and all, by the time the final mission rolled around our interest had started to wane. Weâ€™d begun skipping the X-ray kill sequences, and our patience for waiting for clear shots was starting to become thin. Right up until this point though, our attention had rarely faltered. Aside the fact that two of the missions are set at night, they all have something that sets them apart. The mission set on an airfield has a sprawling underground bunker to explore while a much earlier mission features a series of winding caves and a large cleverly hidden dugout in the side of a cliff. Appearances of vehicles on the battlefield are used sparingly, and this time round itâ€™s possible to witness heavily armoured tanks and such explode in slow motion after a well-paced shot. Fuel tanks ignite, cylinders erupt and the drivers are swiftly ejected out of their seats. Itâ€™s a flashy inclusion, if nothing else. 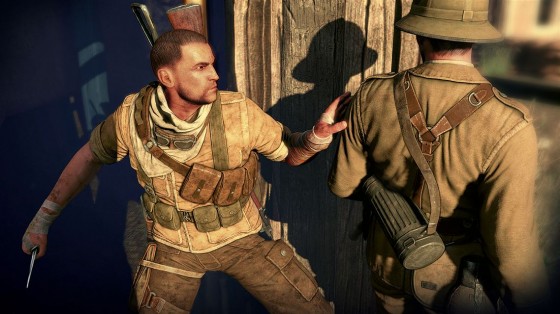 Although surprisingly comprehensive, the online modes are something of an acquired taste. If you strongly detest ‘campers’ in other online shooters, then your enjoyment here will be limited to say the least. Player tend to dig themselves in deep, fortifying their locations with mines and other explosives. During a few matches we even went a good five minutes without even seeing another player. Those one-hit kills are punishing to the extreme, seemingly making players unwilling to explore or step into the open. Thankfully there are survival and co-op modes present to extend playtime, although currently the former only has a choice of two locations. The opposition attacks in greater force in survival mode, working together in large groups as they try to track your location. Ammo and explosives are scarcer too, making this mode quite the challenge. Another mode of note is â€˜Distance Kingâ€™ where the amount of kills matters not – itâ€™s the distance of the shots that counts.

Ultimately, Sniper Elite 3’s shortcomings are the kind most gamers should find easy to look past. The plot isnâ€™t anything special (quite simply: locate and destroy a new weapon of mass destruction) while the last-gen iterations lack the visual clout of fellow big-name shooters. Given their Â£25 price-tag though, this is not only excusable, but it also seals the deal. We can all rest assured that the days of Rogue Warrior and ShellShock 2: Blood Trails are long behind Rebellion.