Compared to Sony and Nintendo, Microsoft is still the new boy on the block. Relatively speaking, of course. When the original Xbox launched, Sony had already managed to make the PlayStation a household name and had successfully launched the PlayStation 2.

Yet in the fifteen so or years that the Xbox brand has been around, Microsoft has managed to build up a vast catalogue of IP and the unexpected E3 unveiling of Phantom Dust suggests that theyâ€™re open to exploring ways of bringing older franchises back from the dead.

Many of the long forgotten IPs below were launched on the original Xbox, back in the early days when Microsoft was trying to broaden the consoleâ€™s appeal as wide as possible. They didn’t seem particularly bothered if they had a hit on their hands or not – in an attempt to steal some limelight from Sony and Nintendo, they were simply focused on getting new games on the shelves, and plenty of press coverage to accompany them.

For years gamers accepted that Master Chief was the Xboxâ€™s mascot. Sure, he lacked Sonicâ€™s attitude and the personality of a certain plumber, but John-117 was still more than just another generic action game hero. He had heart, soul and a conscience. The bond between Master Chief and Cortana in later Halo games only heightened fanâ€™s passion for the protagonist further. 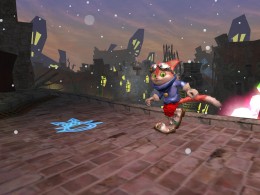 Then along came Blinx, a bipedal cat with a menacing grin and â€˜Xbox greenâ€™ eyes. Presumably Microsoft wanted the Xbox to appeal to a younger age group, in order to take some potential GameCube sales away from Nintendo. The character was likeable enough and the colourful platformer boasted technology that was reportedly impossible to recreate on other formats. Using the Xboxâ€™s HDD, time could be fast-forward and rewound to solve puzzles and defeat bosses.

Microsoft made the smooth move of letting a Japanese studio create both the game and character – Eastern studios always seem to be slightly more adept at creating platformers than their Western counterparts. For reasons unknown however, Microsoft picked Artoon – a relatively new developer whose biggest hit at the time was a GBA platformer known as Pinobee.

Their inexperience with the genre was obvious. Awkward controls made it a punishing experience, especially for younger players. Review scores were mostly mediocre, and consequently it failed to sell in significant numbers.

Any chance of a revival? Amazingly, there was a sequel two years later – Blinx 2: Masters of Time and Space. It flopped despite being a slightly less frustrating experience, so itâ€™s highly doubtful that weâ€™ll ever see Blinx again.

This top-down adventure was intended to fill the RPG-shaped void in the Xboxâ€™s launch line-up. Playing as novice wizard Arran, the protagonist grew older as the story unfolded. This was one of the few noteworthy elements, even if it didn’t significantly alter how the game played.

Using the likes of Gauntlet as an influence, enemies were colour-coded â€“ yellow enemies could only be defeated with lightning spells, and so forth. As a result, it was almost as if you were fighting toys which had escaped from a â€˜Monster in My Pocketâ€™ production line. Visually poor and repetitive to the extreme, it was far from being a system seller.

Any chance of a revival? The name alone brings back memories, and top-down dungeon crawlers are arguably more popular than ever, but the seriesâ€™ poor reputation kills all potential of it coming back. Microsoft even ditched the sequel, which was eventually picked up by budget publisher Jaleco.

This boat-based shooter had all the hallmarks of a launch day rush job. With its then-impressive water effects and fancy explosions it was something of a looker, but ultimately had the depth of a puddle. Once the novelty of the visuals wore off, all appeal swiftly vanished.

It was intended to be â€˜Twisted Metal on waterâ€™ but due to being set at sea it was very hard to tell one arena from another. The current may have been slightly choppier and the skies a different colour, but that was about it for variety. At least the mission objectives offered a small degree of variation, and there was a story to take in too.

Believe it or not, Blood Wake did actually amass a small amount of fans. It was apparently one of the most popular Xbox rentals and sold reasonably well. A sequel was in the works with a co-op mode and improved visuals but it was shelved not long after development started.

Any chance of a revival? Itâ€™s not hard to imagine Blood Wake making a comeback with an online multiplayer focus and a Call of Duty-style perk/killstreak system. The environments would have to be more complex (set in a partly submerged city, perhaps?) but it could work. Potentially, at least.

Big things were expected from Digital Anvilâ€™s third-person shooter. Development started in 2000, following Microsoftâ€™s acquisition of the studio. With over 100 people working on the shooter, and three years of development behind it, it was finally released in 2003. Backed by some heavy press coverage, it reportedly sold well at launch, even besting Haloâ€™s launch day sales.

Critics however found lots of complain about. Each of the four characters had their own skills, strengths and weaknesses but they were negligible at best. As such, there were very few instances when a change of character was necessary to progress. This made the whole thing seem more of a generic run and gunner, rather than the tactical shooter it was made out to be. Another major issue was that female stealth expert Hawk had a ridiculously small health bar, making her pretty much useless.

It was also apparent that the game had suffered from a difficult development, with Digital Anvil apparently not receiving Xbox development kits until 2001. The studio was inexperienced with the genre too, having worked only on space combat shooters such as Wing Commander and Starlancer in the past.

Any chance of a revival? After the lukewarm reviews surfaced, it quickly faded into obscurity. Weâ€™d love to see Left 4 Dead/Evolve developers Turtle Rock Studios work their co-op magic with a new Brute Force, but the likelihood of this is beyond slim. Still, we can hope.

Well, thereâ€™s no denying Quantum Redshiftâ€™s pedigree. Developer Curly Monsters was founded by six developers who left Psygnosis. After working on PSone futuristic racer N-Gen Racing, they set to work on a racer known as Neon and pitched it to Microsoft. The platform holder jumped at the chance to have a WipEout killer in their portfolio. With its trance soundtrack and eye-catching artwork – courtesy of graphic design studio Designers Republic – the original WipEout single-handedly made the PlayStation brand ‘cool’. It was hoped that Neon – which was soon renamed Quantum Redshift – would have the same effect for the Xbox. 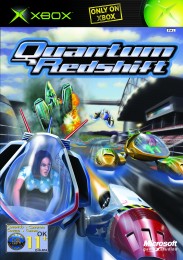 The change of name was ordered by Microsoft, who according to a feature on Eurogamer, were worried about a possible infringement with the Chrysler Neon. Thatâ€™s understandable, totally, and in fairness the new name wasnâ€™t all that bad. Regrettably for Curly Monsters though, Microsoftâ€™s changes didnâ€™t end there. The original cinematics were designed by Japanese artist Satoshi Ueda, but dropped for a more cartoon/comic book aesthetic that didnâ€™t really suit. The awful box-art Microsoft chose also rattled Curly Monstersâ€™ collective cages, failing to keep in line with the gameâ€™s high-tech and futuristic theme. They were so disgusted by it, in fact, that they released an alternative cover online for fans to print out.

As mentioned, Curly Monsters was a studio with talent and as such Quantum Redshift was well-received. Environmental effects such as water spraying into the screen impressed, while the track design was likewise praised. It didnâ€™t sell well however, and arguably the changes Microsoft made were to blame. When compared to WipEout Fusion – which was currently wowing PlayStation 2 owners – Redshift’s ill-fitting presentation let the package down as a whole.

Any chance of a revival? Nope. Even with such IP as Project Gotham Racing and Rallisport Challenge in their back catalogue, Microsoft has made it very clear that the future of Forza is all theyâ€™re concerned about.

In an ideal world, party game collection Fuzion Frenzy would have launched at around the Â£20 mark. It wasnâ€™t a bad game, but with a focus on multiplayer it was a little light on content and offered nothing for those playing alone. It did however have a rather unexpected fan – Bill Gates proclaimed it to be his favourite Xbox launch title.

Seven years later, Fusion Frenzy 2 arrived as a most unexpected sequel. Development was handed to Hudson Soft and after having worked on the Mario Party series alongside Nintendo, they certainly werenâ€™t strangers to the genre. Nevertheless, it went on to receive a critical mauling with the irritatingly chirpy announcer in particular getting many gamer’s proverbial backs up. With review scores as low as 2/10, it swiftly found its way into bargain bins.

Any chance of a revival? Blitz Gamesâ€™ original is mildly well-remembered, but the sequelâ€™s notoriety has killed all hope of a third instalment.

Just like Blood Wake, Fusion Frenzy and Nightcaster, Azurik was another Xbox launch game. Well, a â€˜launch periodâ€™ title if you want to be fussy about it – in Europe it was part of the consoleâ€™s second wave of releases, arriving a few months down the line.

By this point word of its awfulness was widespread – it had already been available in the US for a good six months, gaining the accolade of being one of the systemâ€™s worst games. The story bared a startling resemblance to Microsoftâ€™s own Nightcaster, entailing the blue-hued hero out to collect elemental fragments scattered across a mystical realm.

Any chance of a revival? Rest assured that we wonâ€™t be playing Azurik: Rise of Perathia – 15th Anniversary Edition in 2016. Had it been a success, we would have surely seen a sequel on the original Xbox.

It was Dead or Alive 3 that sold the Xbox to the Japanese market. Keen to provide more of the same, Microsoft signed up a couple of other brawlers. Dream Publishingâ€™s Kakuto Chojin was one; Tao Feng: Fist of the Lotus from Studio Gigante the other.

Kakuto Chojin is the more renowned of the two, if only because it caused controversy upon release. To wit – it featured chants from the Quran in the background music for Middle Eastern character Asad. Microsoft believed that American gamers wouldnâ€™t notice and decided to release the game unedited in America, causing a backlash within the Islamic community. After making headline news in Saudi Arabia, they were soon forced to pull Kakuto Chojin off shelves worldwide.

Just like Dream Publishingâ€™s previous game – early PlayStation 2 title The Bouncer – the one-on-one brawler was praised for its decent visuals but heavily criticised elsewhere, with reviewers referring to it as a poor imitation of Tekken. Designed by Mortal Kombat creator John Tobias, Tao Feng: Fist of the Lotus managed to gain some slightly more positive reviews.

Any chance of a revival? Very unlikely. Prior to researching this feature, we couldnâ€™t even name a single character from either Kakuto Chojin or Tao Feng. In fact, we highly doubt that the majority of gamers out there can. Thatâ€™s how obscure these two are.