As much as we admired the concept behind Ubisoftâ€™s Far Cry 3: Blood Dragon, it was still a vastly familiar experience under the neon-hued exterior. Thatâ€™s to say, the AI routines, vehicle handling and even some of the mission objectives were identical to its full-price counterpart.

Super Ultra Dead Rising 3 Arcade Remix Hyper Edition EX Plus Alpha – to use its delightfully elongated full title – is the franchise equivalent of Ubisoftâ€™s unexpected spin-off, featuring a far brighter colour palette and a strong dose of â€˜90s nostalgia, including a faux arcade cabinet start-up sequence. Thereâ€™s one major difference between this and Blood Dragon though – just like a hapless zombie caught in one of Haggarâ€™s spinning piledrivers, the source material has been turned upside down completely. 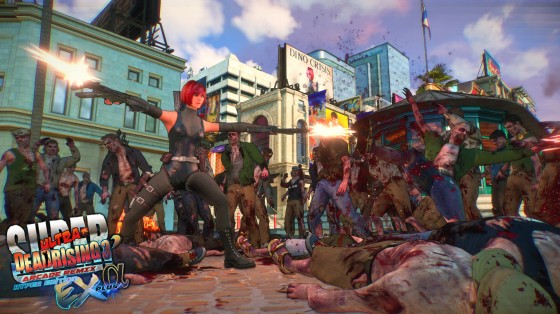 Donâ€™t come to Ultra Dead Rising 3 expecting anything resembling a plot. There is a (very) loose premise however – series protagonists Chuck, Nick, Frank and Annie stumble across a store selling â€˜cosplayâ€™ props, and so after dressing up as characters from Street Fighter, Power Stone, Final Fight, Dino Crisis and more they take to the streets to indulge in light-hearted zombie-bashing horseplay. Itâ€™s a right old Capcom love-in – Forgotten Worldâ€™s â€˜Zennyâ€™ is used as currency, while power-ups include Ghosts â€˜nâ€™ Goblinsâ€™ golden armour and the chance to call in the planes from 1942 for an air-strike.

Although itâ€™s possible to play by your lonesome, Ultra Dead Rising 3 is at its best with three others. The focus is on notching up the highest score while cooperatively killing certain amounts of zombies, destroying super-sized bombs, racing around the city and rescuing survivors within time-limits.

Twenty missions feature in total, spread across four districts of increasing difficulty. Each district is based on a location from Dead Rising 3, but thereâ€™s no lazy recycling going on here – bright blue skies, neon lights, huge spinning collectables and colourful billboards featuring artwork from various Capcom hits render some locations almost unrecognisable. Thereâ€™s a filter of sorts in place too – characters now have a thick black outline, giving the game a more cartoon-like appearance. 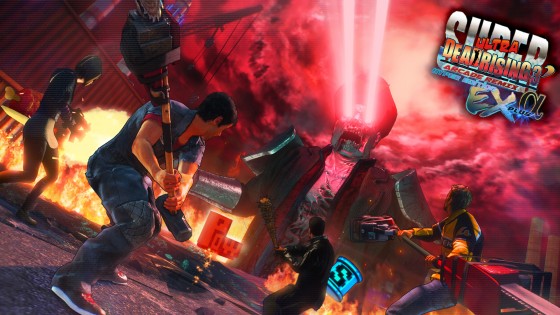 Zombies are also now far less of a threat than before, reduced to being obstacles that merely get in your way as you frantically dash from one objective to the next. The only real threats are the bosses, which include a trio of ninjas dressed as Street Fighter’s Akuma and a screen-filling zombie M. Bison.

Capcom fans will be pleased to hear that not all references are quite so obvious. Background music takes the form of remixes of the publisher’s finest, while some of the characters veer on the obscure side of things, such as Breath of Fireâ€™s Niko and Mega Manâ€™s Stigma. Every character has their own super-moves and comes clutching a weapon; attacks are elaborate, often screen-filling affairs.

The first batch of unlockable characters are simply purchased using Zenny, while the rest require certain criteria to be met such as finding and destroy arcade cabinets. Two are hidden in each district, occasionally requiring a degree of exploration to locate. Others are unlocked by killing a certain number of zombies with one character or obtaining â€˜S ranksâ€™ in each district. To unlock every character will take a considerable amount of time, but it does mean replaying each district over and over again. 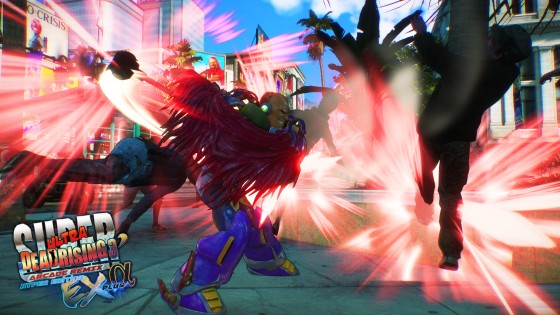 This is Ultra Dead Rising 3â€™s biggest problem by far. As vibrant and enjoyable as it is, the experience is short lived – missions last just a few minutes, and with three others well versed with the objectives itâ€™s not uncommon to finish a stage with a good 100 seconds or so left on the clock. Incidentally, we donâ€™t recommend going it alone – on your lonesome the time limits are a little too challenging during the missions that require survivors to be saved or vehicles found and driven back to the garage.

Considering DLC usually contains a handful of extra missions and little more, this Â£7.99 add-on deserves to be remembered for providing an extremely different experience to its main campaign. Itâ€™s amazing to think that roughly a year ago we were under the impression that Dead Rising 3 was going to be a joyless experience, stripped of all daftness and humour. Now weâ€™re able to dress up as Ryu and throw fireballs at giant zombies, while music from various Capcom classics blares out in the background. What a difference a year makes, eh?