The doors have closed on another E3. Microsoft proved that theyâ€™re committed to turning the Xbox Oneâ€™s fortunes around; Sony provided a typically strong showing; Nintendoâ€™s belief that itâ€™ll be great games thatâ€™ll eventually get the Wii U into more homes was clear to all.

Matt, Adam and Jake have picked a clutch of titles that caught their attention, including Nintendoâ€™s staggeringly beautiful Wii U Zelda outing and the ambitious and similarly beautiful PlayStation 4-exclusive No Manâ€™s Sky. But first, a couple of indie titles heading to Xbox One. 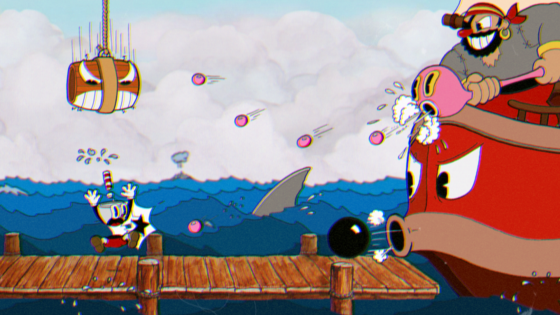 As a writer who often relies on caffeine to coax the words out, I took a shine to the titular Cuphead instantly. Finally, a videogame character I relate to. Cuphead is joined by Mugman, and together they traverse 2D worlds influenced by the 1930â€™s Disney â€˜Silly Symphoniesâ€™ cartoons. In a way, I guess this makes it a semi-sequel of sorts to the 16-bit classic Mickey Mania.

Studio MDHR has been working on Cuphead for quite some time already but it wasnâ€™t until catching a brief glimpse of it during Microsoftâ€™s ID@Xbox showreel that I learned of its existence. With its smooth animation and careful attention to detail it did quite literally, I kid you not, raise my eyebrows. It genuinely resembles one of Walt Disneyâ€™s early efforts, from the startled expressions on the faces of bosses after giving them a clout, to the way Cuphead merrily bobs up and down while standing on the spot. To ensure total authenticity, backdrops are created using watercolours while the animation is being hand-drawn and coloured on traditional animation cels.

Itâ€™s a run and gunner that pays homage to Gunstar Heroes, Contra III, Mega Man X and more. Diversity will come for â€˜shmupâ€™ stages – with the likes of Radiant Silvergun and Ikargua cited as influences – and also power-ups similar to Super Mario Bros. 3â€™s suits thatâ€™ll bestow temporary new powers. Rather than simply copy elements from the aforementioned, Studio MDHR are spending a considerable amount of time fine-tuning the enemy attack patterns to previously unseen levels of complexity. Bosses will have different attack patterns depending on difficulty level, while when replaying previously completed levels enemies will have a new attack or two up their sleeves. If all things go to plan, over 30 bosses will feature in total, bagging MDHR the Guinness World Record for â€˜Most Boss Battles in a Run and Gun Gameâ€™ in the process.

The developers have also spent a lot of time studying Super Mario World, promising a â€œplayableâ€ world map and a wealth of secret areas. Hereâ€™s a quote from MDHRâ€™s blog:

When developing Cuphead we started with the basics – who knows this better than Shigeru Miyamoto. He set the standard for all 2D and 3D platformers and they are still a great formula for gameplay perfection. Knowing this, weâ€™ve spent a lot of time fine tuning small details like hitboxes, screen movement, player control, weapon balancing, and a ton of small details that may go unnoticed by some.

Volgarr the Viking – Xbox One

Continuing the theme of authenticity, this 2D hack and slasher from the aptly named Crazy Viking Studios could have easily existed back in the â€˜90s, crammed onto an Amiga disc, or existing slightly less forcefully squeezed onto a Mega Drive cart.

I have no qualms about recommending to keep an eye out for this one. The PC version went well, bagging a handful of awards in the process. Taitoâ€™s Rastan is rightly referred to as the biggest influence, due to the relentless pace and similar art direction.

Controls are tight, allowing the hirsute hero to block attacks and roll out of harmâ€™s way with ease. Volgarr starts off with a wooden shield that can only take two hits, but later new armour and weapons become available, contained in Ghouls â€˜nâ€™ Ghosts-style chests. Itâ€™s because of the responsive controls that death rarely feels unfair – death comes at the hand of your own skills, rather than cheap or lazy game design.

With a little bit of luck, the developerâ€™s next game – the sci-fi influenced Eternal Helix – will eventually find its way onto Xbox One via the ID@Xbox program too. And with even more luck, Microsoft will do the right thing and give games such as Volgarr and Cuphead the promotion that they deserve. 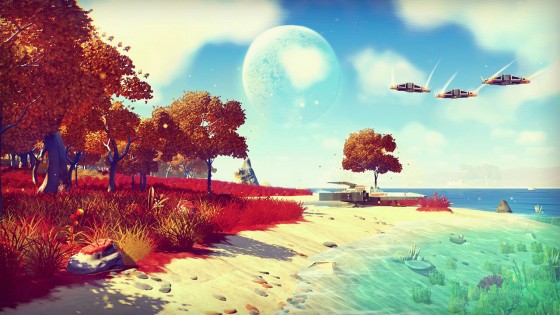 What do you get when you stick four men together in a small office in Guildford? In the case of Joe Danger developers Hello Games, you get No Man’s Sky, a sci-fi space adventure game set in an infinite procedurally generated universe. You can fly through space, sure, but you can also explore all the planets – an unlimited number of them, all populated with random alien life. Oh yes, and you’re connected online sharing your discoveries with all the other players too. We’re not quite sure what the goal is yet, other than trying to reach the centre of the universe, but it sounds amazing.

Looks nice, and rather colourful too. Unlike other vast space sims – Elite, EVE, etc – No Man’s Sky seems to be paying as much attention to the planets as the spaceships, creating a seamless universe where you’re in an orbital space battle one minute and landing in a Dinosaur filled jungle the next. It all sounds like a kid’s wild dream, but it’s very real. Certainly a contender for game of the show – and all from a small British indie developer. 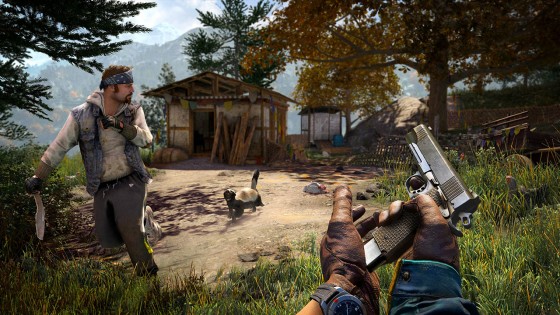 Sure, it’s yet more shooty-bang-bang, and as evidenced by the number 4, we’re not getting excited about a brand new series. It feels a bit different to previous Far Crys though – more open world, more Skyrim. Going into E3 we wouldn’t have given it a second thought, but the gameplay trailer was kind of impressive. Just look…

Far Cry 4 was just one of many excellent games shown by Ubisoft, who are proving themselves to be something of a powerhouse (if suffering slightly from delays and controversial bull-trailers). The Division and Assassin’s Creed Unity also look like some of the best games of the coming year. Whilst Far Cry 4 is still a game about grizzled men shooting disposable armies, we like the way Ubisoft are making the whole thing more expansive yet more cinematic too. For those moments when you just have to blow someone’s face off with a shotgun, there’s Far Cry 4.

This website has had the strapline ‘Finding The Fun’ for a number of years, and that’s exactly what Nintendo were up to at this year’s E3. To just glance at their E3 line-up is to be bombarded by a riot of colour and texture. 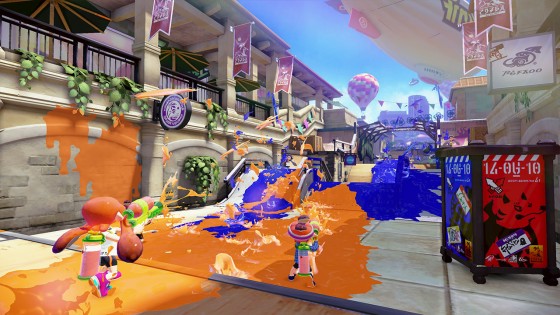 Splatoon isn’t the obvious highlight of Nintendo’s sensorial assault, but it’s the one that grabbed my attention for a couple of reasons. For one, it’s a new IP, and for Nintendo that’s immediately noteworthy. The other is that it’s as close as I’ve got to wanting to play an online shooter.

Look at it! Then look at any generic FPS. See the difference? It’s the fun. Admittedly its jovial style immediately limits its appeal to the core 14-year-old demographic, who are far too grown up for something so obviously joyous. But for the younger mind that’s yet to be told what’s accepted as cool, and the older mind that maybe should know better but also knows that it doesn’t have to know better thank you very much – ideal.

It’s not just the visuals: spraying ink to capture territory, turning into a squid to travel faster through that ink – what’s not to like? It might not turn out to be as great as it looks. Even if it does, I may never play it. But right now, it looks like just what’s needed.

The Legend of Zelda – Wii U

All of which isn’t to say that Nintendo’s existing IP didn’t bear interesting fruit. Yoshi’s Woolly World couldn’t be more adorable, and then there’s that chap in a green tunic. 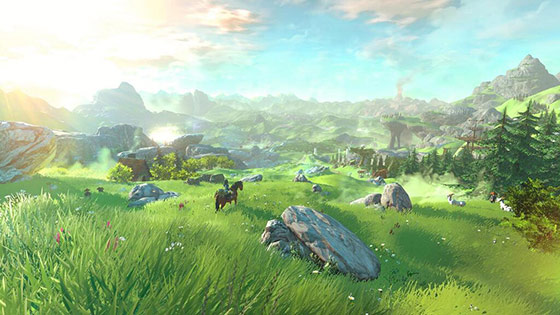 Details? Who needs details when you’ve got a Zelda game that looks that good? No-one, given the reception the brief reveal has had. The visuals look expertly pitched between The Wind Waker and the likes of Twilight Princess, precision aimed so that there will be no complaints from any quarters about the graphical style.

The idea of a more open world is promising, especially if you can have a little sit in that beautiful grass and enjoy a nice sandwich. That’d be grand.

The only downside – like an awful lot of Nintendo’s showing – is the 2015 release date. Something big to build on Mario Kart 8’s momentum could have been just what the Wii U needs.