With last year’s E3 conferences all about the new consoles, this year the games were the centrepiece. Sony were keen on showing us quite a lot of them.

If E3 was a fight – and it sort of is, let’s face it – Sony once again stepped it up. Microsoft’s Xbox conference was an improvement on last year’s disaster, but with few particularly stand out titles. Sony’s show on the other hand, was more or less a non-stop stream of games to make the audience go “I want that!”. Although in both cases, new IP was a little lacking.

Sony’s core message was “look, games!”, with a strong focus on “Jesus, that’s very good looking”. Where to start… 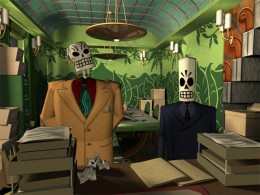 Yes, that’s right. Tim Schafer’s Double Fine Productions are pulling LucasArts’ classic into the modern age as Grim Fandango Remastered, initially for PlayStation 4 and PS Vita. That will probably go down as the most unexpected announcement of E3.

Remastering seems to be a theme at this year’s E3. Grim Fandango aside (and Microsoft’s Halo), Sony also presented The Last Of Us Remastered, now due for an August 1st 2014 release, and GTA V for PS4 (as well as Xbox One and PC) due this autumn. Oh, let us not forget Ratchet & Clank Remastered – don’t all rush out and buy it at once!

The big new IP unveiling came in the form of Bloodborne, from Dark Souls developer From Software. It looked pretty gruesome. The trailer seemed to involve a dark character lurking in the shadows, slicing apart zombie-like corpses and hounds. Probably not exactly the type of game that’s lacking in the world, but the developers have a good track record and Sony seemed excited so we won’t be too harsh.

Another original, PlayStation exclusive game on show was The Order: 1886, again. Last year we saw the trailer, this year some gameplay of a moustached man walking in the shadows. It’s due for release in February 2015.

In a rather casual manner, Media Molecule came on stage to show off LittleBigPlanet 3. Needless to say, that can only be a good thing. Whilst it looks very similar to previous games in the series, new characters have been introduced with a bunch of special abilities. You won’t have to wait too long to play it, as it’ll be coming to both PS3 and PS4 in November.

Once again, indie titles were a big part of Sony’s offering. There are frankly too many to mention, but we’re glad to see BROFORCE (a retro-style side-scrolling shooter where you play as 80s action heroes smashing through destructable terrain – there’s a prototype online that’s worth a play) and Hotline Miami 2: Wrong Number coming to PS4 and PS Vita.

Journey developers Giant Squid are also working on something new – the mildly pretentious sounding Abzû. We’re not sure what the game involves (although it’s mostly set underwater), but it looks very pretty. Expect hipster gaming sites to fawn over that one for awhile.

Guildford-based four man development studio Hello Games (of Joe Danger fame) properly unveiled No Man’s Sky. Whilst shown as part of the indie gaming section, that might be doing it a disservice – it’s genuinely one of the highlights of the show, and one of the most interesting games we’ve seen in a long time. Getting over the fact that this Triple A worthy title is being made by just four men, the concept itself – exploring an online infinite universe full of randomly generated planets, packed with alien life and space battles – is just amazing. Look, here’s the gameplay trailer below. Look at it. Look at it! Does that not have the potential to be the best thing ever?

Landing back on Earth, Sony announced that the PlayStation TV (released in Japan last November) would be coming to the US and Europe soon, for £99. It’s essentially a PS Vita chipset that you plug into your TV and control with a Dualshock pad. It plays PS Vita games natively, and also allows for remote play of PS4 and PS3 titles, as well as eventually playing streamed PS Now titles, once the PS Now game streaming service comes to Europe (it’s coming to the US and Canada this summer, but no mention about a release over here yet). 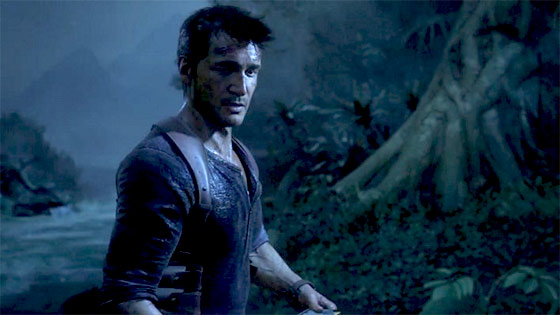 Sony closed the show with a sneak peak at Uncharted 4: A Thief’s End. The footage, whilst running on a PS4, didn’t tell us too much, other than the fact that it looks very pretty. It’s Naughty Dog though, so we’re confident it will be amazing, when we finally get to play it next year.

That was the gist of it. Lots of good games that we should all be playing quite soon. We haven’t even mentioned all of the titles from big publishers like EA and Ubisoft (Battlefield Hardline, Assassin’s Creed Unity, The Division, Rainbow Six: Seige, Dragon Age: Inquisition, and of course the whole EA Sports range). It’s going to be a busy year.