By their nature, racing games are perfect system showcases. The rivalry between Saturn and PlayStation launch titles Daytona USA and Ridge Racer in particular had the â€˜90s gaming press frothing with excitement. Even before that Nintendoâ€™s F-Zero impressed just about everyone who laid eyes on it. Hot on the heels of F-Zero came the legendary Super Mario Kart – a game that made anything on the Mega Drive look positively bland in comparison.

Mario Kart DS and Mario Kart 7 showed that the respective handhelds were no slouch when it came to throwing around polygons, while Mario Kart Wii proved that the console was more than just a GameCube in a slimmer case.

This brings us nicely onto Mario Kart 8. To say it looks sensational would be an understatement. A genuine treat for the eyes, thereâ€™s no way somebody could say the Wii U is underpowered after catching even the slightest glimpse of it in motion. Colourful and vibrant throughout, the frame rate doesn’t falter even with twelve beautifully animated characters on the track at once. The MKTV replays look better still, removing the on-screen clutter while adding a subtle filter. 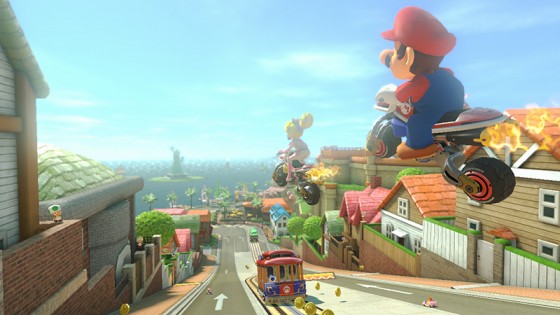 Rather than refine the series or take it back to basics, Mario Kart 8 builds upon its 3DS predecessor with a few notable tweaks here and there. That means the hang gliding and underwater sections are back for a second time, whilst the track selection is a mixture of new and old. Love them or hate them, bikes make a return as well. Cornering while on two wheels is trickier than before, but the pay-off is made slightly more rewarding because of it.

The majority of karts and bikes are locked to begin with, becoming available once enough coins have been collected. Half the characters are locked at the start too, including all six of the Koopa siblings and a few surprise faces. New vehicle parts unlock at such a steady rate that almost every victory earns something new, even if it is just a glider with a different motif.

Innovation comes not just from the aforementioned MKTV replays – which can be edited and shared online – but also from new anti-gravity strips that send Mario and chums upside down and vertically along walls. Handling becomes slightly slippery, allowing for some big power-slides… which of course provide those all-important speed boosts. Even the revamped retro tracks have been freshened up with an anti-grav strip or two, along with the occasional underwater section. 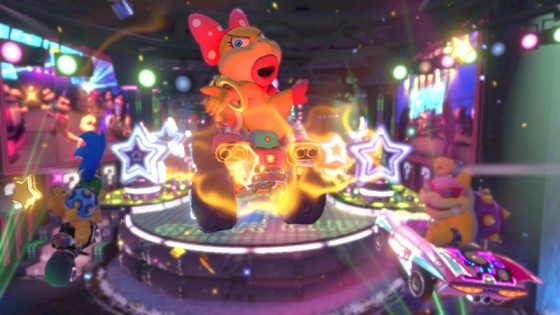 Each as amusing to use as the last, the three new weapons feel honed to perfection. The boomerang flower can be thrown three times, potentially hitting a target twice as it makes its return. The piranha plant meanwhile will merrily chomp everything in sight, from banana skins left in your path to rival racers. Then thereâ€™s the super horn, which shoves all those in close vicinity off the track. To make way for the new weapons a few older ones have been given the chop, including the fake item boxes. For better or worse, the dreaded blue shells remain. They are slighter rarer this time round though. Rarer still are the Bob-ombs – youâ€™ll be lucky to get one per cup, let alone one per race.

Not a single track feels under developed

Tracks likewise feel as if theyâ€™ve been tinkered within an inch of their life. No corner too tight or straight too narrow. Not a single track feels under developed, while the retro tracks have received such a significant overhaul that a few – such as the N64’s Wario Stadium – are almost unrecognisable. Nintendo has clearly listened to fans’ feedback as theyâ€™ve chosen the pick of the crop, from the legendary Moo Moo Meadows with its rolling green fields to the traffic heavy Toad’s Turnpike. As for the new tracks, the snow covered Mount Wario looks set to become a new favourite, as is the Electrodome – a neon-hued nightclub with plenty of winding paths. Another highlight is Sweet Sweet Canyon, which bears an uncanny resemblance to Wreck It Ralphâ€™s faux karting game Sugar Rush. How’s that for ironic? 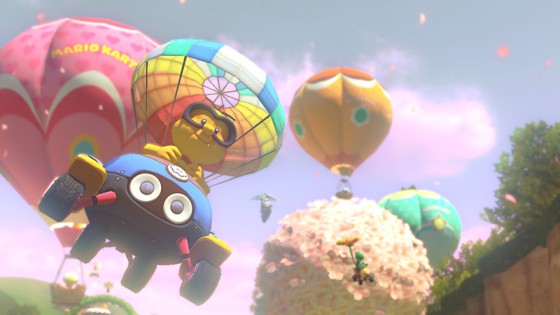 Nuisances come in several forms, from mastering slipstreaming to using gliders to access shortcuts and alternative paths. Gliding feels more at home here on the big screen than it did on 3DS; learning how to land back on the tarmac without a thump takes a degree of skill. And as always, using the reverse view to successfully place banana skins and such into the path of tailgaters can give an underhand advantage. These tricks help to ensure victory when playing online – 150cc mode is as tricky as always, but the real challenge comes from playing other experienced racers.

Online play is an all-together slicker experience – it’s clear that a great deal of effort has gone into making it as easy to play with friends as possible. As per Mario Kart Wii, your online racing career begins with a base score of 1000. Points are then added or deducted depending on your placing at the end of each race. It’s such a simple way to determine a player’s level of skill, yet it works so well. You’ll curse after losing several races in a row, and no doubt fist-pump the air when reaching a new high score. 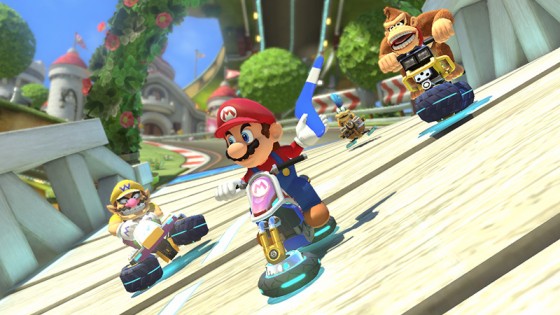 If there is a problem with the online mode it’s that there are no dedicated Battle Mode tracks. Instead, the classic balloon popping battles take place on a standard tracks with each player starting in a random location. In Nintendo’s defence, they have at least picked a suitable selection – the majority feature wide strips of road, giving plenty of chance to evade and turn around with ease.

Mario Kart 8 is one of those rare games that never fails to make you smile. Sure, you’ll curse when hit with a blue shell or whilst getting pipped to the post by just a few seconds, yet such frustration is always short-lived. Nintendo hasn’t just raised the bar for future Mario Kart games, but also their first-party titles in general. When you bear in mind that the Wii U already offers some of Nintendo’s finest, that really is quite the compliment.