If Thomas Was Alone was a plate of food on Masterchef, it would be a deconstructed roast chicken dinner.

A ballotine of breast, confit wing, fondant potato, a shard of crispy skin, pearls of bread sauce, a consommÃ© for the hell of it, inevitably morels, something clever with a pea. Greg and John would wonder whether it’d deliver the flavour of a real roast chicken dinner. Does it really need elevating to fine dining?

But John would be impressed by the skill, and Greg would make some sort of guttural noise and describe it as a hug or a kiss, and hopefully nothing more graphic. Each individual element would be perfectly cooked, and come together in absolute harmony. The seasoning would be bang on.

Thomas Was Alone is a deconstructed platform game. It’s elegantly minimalist; terribly modern, in a fashionably retro sense. The skills that you’d expect to find in a platform game are dispersed amongst the cast of rectangles. That stark cast are given personality through the narration, reflecting on the human condition.

Sounds like it might be a bit ‘clever’ – which is probably why I’ve only just come to it. But the game has done a remarkable job of maintaining its profile – which is why I’ve come to it at all.

It was released on PC in 2012, then PlayStation Network in 2013, later that year taking the BAFTA Games Performer Award for Danny Wallace’s narration. In 2014 it’s been released on iPad, and features in Sony’s new ‘Discover’ section of the PlayStation Store. Resistance is futile.

But like that fancy plate of chicken, it works a treat.

The task is always to get each character to its correspondingly sized portal, using each one’s strengths to help the rest. This isn’t terribly difficult for the most part, and only a few times does the game put you under any pressure. It’s a game that seems to like you. It just wants you to enjoy, to be satisfied. 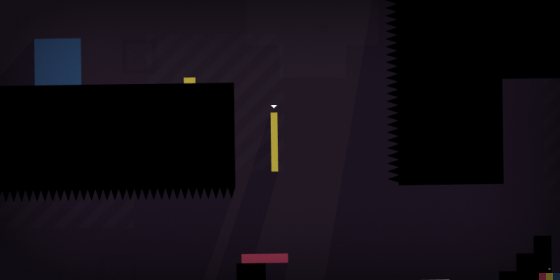 Though it may not be overly taxing, thought is required to piece together a solution to get each character to where they need to be. The satisfaction is in how neatly the levels are constructed, that even the more capable characters have to rely on others.

This is heightened by the characterisation that comes through the narration. The characters have simple traits: John, the tall yellow rectangle, is a bit too pleased with himself and his massive jump; Laura, the long squat pink rectangle that other characters can bounce off, is convinced that people just use her. These simple characters develop as others join and events unfurl, ultimately coming to better appreciate their place in the world.

It’s not ‘clever’; it’s thoughtful. It proves that a platform game can be elevated to something more meaningful, and that doing so doesn’t have to be any less enjoyable. And the seasoning is bang on.