There’s daytime ITV1 quiz show Tipping Point, in which Ben Shephard has an only slightly easier job than Noel Edmonds on Deal Or No Deal in convincing the viewer that there’s appreciable skill involved. There are a baffling number of them available for smartphones and online. And Sega has lumped RPG and collectable elements on top of one for this free to play effort. 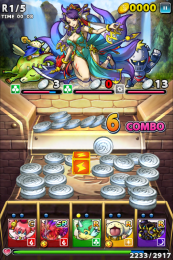 The collectable elements are monsters, from which you put together a team to take into battle. These monsters are of various elements, they evolve, and come in balls – in short definitely nothing like Pokemon. It’s all perfectly nicely done though, and getting rid of unwanted monsters by fusing them with others is enjoyable in an upcycling sort of way.

The coin pusher-based battles are initially chaotic affairs, with as much skill involved as you might imagine. Your monsters line up along the bottom of the screen, and as coins fall into their slots, they attack. They also earn special moves, such as speeding up the pusher or showering coins on the stage. You drop coins onto the pusher, limited only by the fact that each enemy has a countdown, and after you’ve dropped that many coins, they attack. This doesn’t tend to happen much at the start though, as combos and defeated enemies make coins spew all over the stage, keeping itself going like a madly coloured perpetual motion machine.

But the design does eventually tease some tactics out of the mechanic, thanks to each elemental type being stronger or weaker against others. This places obvious importance on maintaining a strong and diverse stock of monsters, and putting together an appropriate team for the mission in question. It also comes into play during battle: specific enemies can be targeted, so as a pile of coins is about to fall into one of your monsters’ slots, you have the chance to direct their impending attack at the most effective enemy. It can be quite satisfying. 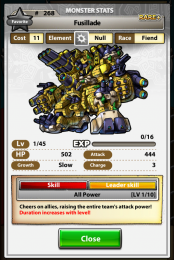 It can also be rather slow going though, when combos and trivial enemies don’t keep coins flowing with gay abandon. Faced with one large enemy, and an unfortunately rubbish line up of monsters, it can be a bit of a slog to whittle down its health bar one coin at a time.

If the battles are variable, the loading and connecting times aren’t. Even menu screens prompt a lengthy load, and then connecting to the server – which is even slower if you’re not on Wi-Fi. My patience was a far more limiting factor than the stamina system the game employs. In fact, IAPs are surprisingly sensitively handled. The more interesting monsters tend to come from activities which involve spending one of the coin currencies in use, but these are replenished at a reasonable rate. There’s definite benefit to spending real money, but absolutely no requirement – as it should be.

It’s still a bit baffling though. One of your team is always another player’s monster, and you can become friends with that player afterwards; the game is very keen for you to do this, for reasons unknown. There are too many types of coin to collect and spend. The battles are often virtually automatic, or tedious. The monsters aren’t quite charming enough. Yet it’s bright, and oddly compulsive.

I don’t know what to think any more. But I definitely need to be more players’ first friend. That’s the best thing. For some reason.