Of the five Nintendo eShop releases due this week, no less than three are worthy of attention. Maybe even four if Conception II’s mixed review aren’t too off-putting. 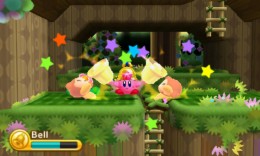 In time for the retail release, Kirby: Triple Deluxe arrives on 3DS eShop this Friday, priced at Â£34.99.

Although thatâ€™s slightly more than you may expect to pay for it online – itâ€™s currently a reasonable Â£27.85 on Amazon, in fact – those who purchase the digital version can download Kirby’s Dream Land 2 for free.

Reviews of Kirby: Triple Deluxe have been positive so far, including an 8 from Eurogamer and a 7 from EDGE. â€œ[As it is,] his 3DS debut is too uneven to be essential, but too charming for fans to missâ€ said EDGE.

Kirby is being joined by RPG adventure Conception II: Children of the Seven Stars. Thatâ€™s due to arrive Thursday for Â£31.99. Reviews for this one include an 8 from Nintendo Life and a lukewarm 6.0 from GameInformer. From the sound it, itâ€™s a decent enough dungeon crawler, just not a particularly original one.

Over on Wii U Dakko Dakkoâ€™s Scram Kitty and his Buddy on Rails leads the way. The curiously titled top-down shooter has been a long time coming, but it has been well worth the wait.

The Official Nintendo Magazine dished out a whopping 90% last month, calling it one of the Wii U eShopâ€™s finest. Their review explains that although tough, itâ€™s a game thatâ€™s all the better for a having a challenging difficulty level, always keeping you coming back for more.

Here, have a launch trailer:

Then thereâ€™s Fit Music for Wii U from Oxygene. At Â£24.90 itâ€™s not far off from being a full price release. The footage on Nintendoâ€™s site suggests that itâ€™s quite a low budget affair however. It might be an idea to stick with Wii Fit U for your fat fighting needs.

This leaves us with Mr. Driller 2 on Wii U Virtual Console. Unless weâ€™re mistaken, itâ€™s the first third-party GBA game to appear on the service. Not a bad way to get the ball rolling. As per the previous Wii U GBA re-releases, itâ€™ll set you back Â£6.29.