Many of these lifeless imitators were released not during the 16-bit heyday but rather the turn of the millennium. Arguably, this can be attributed not just the success of system-seller Mario Kart 64 but also the PSoneâ€™s Crash Team Racing. The PSone was also starting to appear to a far younger age group at the time – a perfect target for licensed trash.

With Mario Kart 8 just weeks away, weâ€™ve rounded-up an assortment of kart racers that have faded into obscurity. Behold our collection of curious kart racers:

Released earlier this year, El Chavo Kart is the newest game in this feature and by quite a margin. It has nothing to do with Britainâ€™s yob culture, youâ€™ll no doubt be pleased to learn – itâ€™s based on a Mexican childrenâ€™s cartoon, which in turn is based on a â€˜70s Latin American sitcom. Somewhat disturbingly, the main character – 8-year-old orphan El Chavo – was played by a fully grown man. We guess that makes him the Mexican equivalent of The Krankies.

Due to being import-only this isnâ€™t a game weâ€™ve sampled for ourselves. Footage seems to suggest though that itâ€™s actually quite polished – a nippy racer thatâ€™s certainly far more proficient than the likes of DreamWorks Super Star Kartz (ugh) and Ben 10 Galactic Racing. The few reviews out there arenâ€™t too damning either. It does however appear to be a pretty typical kart racer, with weapons including bowling balls and old newspapers that fly into the racerâ€™s face to block their view.

Publisher Slang released another El Chavo game prior to this – a mini-game collection on Wii and DS. It was colourful, if nothing else.

Any child expecting to find the likes of Mickey, Donald and Goofy rallying around in race cars would have ended up sorely disappointed with this multi-format racer. It starred just three Disney characters – Chip & Dale and Jiminy Cricket. With such a peculiar line-up, itâ€™s impossible not to consider it obscure.

Logic dictates that the licenses for Disneyâ€™s more renowned characters were tied up with other publishers. Mickeyâ€™s Speedway USA and Donald Duck Goinâ€™ Quackers were released in the same year so our guess is that Nintendo and Ubisoft respectively held the rights to Mickey and Donald. Another possibility is that Eidos simply didnâ€™t want to pay out for a full roster, hoping that it would sell on name alone.

When it came to filling the rest of character line-up, Crystal Dynamics were left to muster up their own creations. In fairness, they didnâ€™t do a bad job – the characters they created could have very well come from a Disney production, including â€˜wackyâ€™ inventor Otto Plugnut and female pirate Polly Roger.

Out of all the games in this feature, this one makes the most sense. The likes of Dennis the Menace and The Bash Street Kids were often seen in the pages of The Beano racing one another in rickety go-karts. With a blatant disregard for health and safely too, we might add.

The character roster comprised ten Beano and Dandy characters instantly recognisable to those who grew up with the long-running comics. Minnie the Minx, Bananaman, Roger the Dodger and Gnasher each had their own novelty vehicles, while tracks were set in places such as the Bash Street Kids’ school and the streets of Beanotown.

There were also two additional hidden characters – Walter the Softy and Calamity James, who had reversed controls. Ingenious! An explanation could be found in the comic as to why Dandy and Beano characters were competing against one another – a strip entitled â€˜Dandy Days in Beanotownâ€™ ran during the gameâ€™s release, in which Desperate Dan had crossed over to the Beano to become an ambassador.

Although the premise alone did hold much promise, the 2003 release was ruined by a lack of content and sloppy track design caused by a focus on indoor locations. There was no multiplayer mode either, further enforcing the fact that this really was a very low budget affair. Even though a poor game, had this been released on a console we would have certainly given it a go out of sheer curiosity.

Woody Woodpecker has to be one of the most loathsome cartoon characters of all time. An annoying little twerp, with an irritating catchphrase and an equally undesirable assortment of friends. Proving that just about every license can be slapped onto a generic kart racer, Wood Woodpecker Racing made an appearance on PSone and Game Boy Color back in 2000. 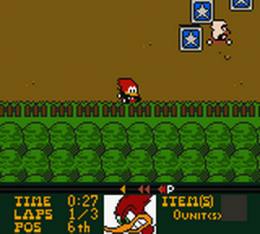 The list of complaints is as long as Woodyâ€™s beak – uninspired track design, dull weapons, woeful collision detection and sloppy enemy AI. They could even be observed driving straight into pillars and blockades.

The Game Boy Color version didnâ€™t fare much better, opting for a strange side-on perspective. Plans were also afoot for a Dreamcast release, but they soon ended on the scrapheap. The screenshots that exist suggest that it was going to be another poor Konami conversion like Nightmare Creatures II before it, with slightly smoother textures and no other notable enhancements.

Beating Mario Kart: Double Dash by a significant number of years, BC Racers featured two riders in the same vehicle. We are however bending the rules slightly for this one – itâ€™s not a kart racer, but rather a motorbike and sidecart racer. Well, prehistoric foot-powered motorbikes.

â€˜90s platforming hero Chuck Rock was amongst the cast of characters, alongside the pun-tastic Brick Jagger, Sid Viscous and Jimi Handtrix. One character steered while the other punched the opposition, bringing a degree of Road Rash into the mix. Aside from a turbo boost, there were no power-ups in the game at all in fact. Featuring 2D sprites on rotating â€˜Mode 7â€™ style backdrops, we wouldnâ€™t be surprised to learn that it recycled the engine from Coreâ€™s own Thunderhawk – one of the few Mega CD games worth owning.

Despite being developed in the UK, the 32X version was only released in the US. A French magazine did however review the 32X iteration, suggesting that it was pulled unexpectedly.

The phrase â€˜carpe diemâ€™ springs to mind when it comes to Konami Krazy Racers. Mario Kart Advance was still a long way off, and so Konami leapt in to fill that void with a kart racer of their own. Whatâ€™s more, it was a GBA launch title in all three territories.

As launch titles go, itâ€™s one of the better ones. Visually slick, with a sound-track worth untangling your earphones for:

Obscurity lies not just in the fact that Konami Krazy Racers is often forgotten by many, but also its character roster. Konami could have easily placed their most recognisable characters behind the wheels of their colourful karts, but instead opted for an obscure cast. Rather than Solid Snake, thereâ€™s Cyborg Ninja. And instead of Trevor or Simon Belmont, Castlevaniaâ€™s end boss Dracula fills their place.

Characters from Twinbee, Legend of Mystical Ninja, Pop â€˜nâ€™ Music, Parodius and a random baseball player from Konamiâ€™s Jikkyou Pro series fill up the rest of the assortment. Weâ€™d argue heavily that the most renowned character is not Metal Gearâ€™s Cyborg Ninja, but blue-haired hero Goemon.

With a little bit of luck, Konami Krazy Racers will one day make it onto one of the Virtual Console platforms. The absence of a power slide makes cornering tricky at times, but itâ€™s still a neat little game that more people should have played. Now thatâ€™s something you can rarely say about launch titles.