It pains us to say it, but we wouldnâ€™t have trusted Rare themselves to develop to this reboot, let alone Double Helix – a studio used to getting their hands dirty with movie tie-ins and little more. Rare havenâ€™t made a fighting game for 16 years, and the studio is vastly different nowadays to back when they were under the watchful eye of Nintendo.

It was EDGEâ€™s 7/10 that restored our faith. EDGE arenâ€™t renown for being overly generous with review scores, and as every gamer worth their salt knows, launch games have a habit of being a bit on the smelly side. For a launch game to receive a solid 7/10 is about as much as you could ever hope for.

In our eyes, Killer Instinct is more of a remake than a reboot. The source material has clearly been studied at close detail. Jago remains the good all-rounder, while Orchid’s attacks may be weak but sheâ€™s able to land blows in quick succession. Thunder meanwhile is as tricky as ever to get to grips with but deadly in the hands of an experienced player.

No matter which character you pick though, itâ€™s retains everything that made the original Killer Instinct so incredibly satisfying to play. It’s flashy, fast-paced and fluid.

A few reviewers suggested that, as a free to play release, this is the most generous demo of recent times. That’s a slightly unfair comparison as even those unwilling to spend money on it will find that there’s more substance here than your typical demo. Making Jago the initial free character was a wise move – as we said, heâ€™s the good all-rounder – and as promised free characters have been rotated regularly.

Thankfully – and unlike the majority of free to play releases – those who do open their virtual wallets arenâ€™t at an advantage over other players. They simply have more characters to master. The more you pay out, the deeper an experience it becomes. Each character also has their own achievements and titles to unlock, thus giving something to focus on. 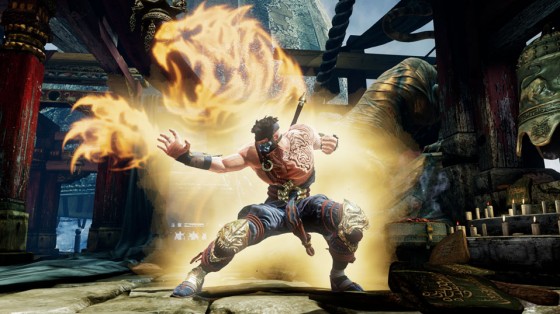 Spinal was the first of the post-launch characters to arrive. This was a somewhat odd choice as Spinal strikes us as a beginnerâ€™s character, able to unleash projectiles with relative ease and teleport out of harmâ€™s way in flash. His close-up attacks too are devastating, twirling his sword and bashing with his shield to take huge chunks off the opponentâ€™s health bar. Heâ€™s the only character that stands out as being slightly too overpowered, save perhaps for Glacius.

Last monthâ€™s release of Fulgore – once the poster boy, well cyborg, of the franchise – wraps-up Season Oneâ€™s offerings. Itâ€™s easy to see why Fulgore was added to the roster last. The mute cyborg is an altogether different beast from the other characters due to the â€˜shadow moveâ€™ bar being replaced by a energy reactor. This bar has to be charged by performing a move, as you would a fireball or similar. The energy reactor not only powers Fulgoreâ€™s laser blast but also the self-explanatory devastator beam which requires a full bar to unleash, and can only be used while in Instinct Mode.

With Season One now done and dusted, talk of Season Two is starting to heat up. As Double Helix have been snapped up by Amazon to create titles for the Amazon Fire TV, the baton has been passed to Iron Galaxy, who have worked on conversions of various Capcom brawlers.

Itâ€™s pretty much a given that Season Twoâ€™s character roster will be comprised of the faces absent from Season One. Namely Cinder, TJ Combo, Tusk, Maya and Riptor. You can also expect a new character to enter the fray, a la Season Oneâ€™s Sadira. Whether Double Helix laid out plans for a newcomer before Iron Galaxy took over their work is unknown. Chances are though that itâ€™ll be another female contender. There really is a lot of testosterone following in Killer Instinctâ€™s back catalogue of characters.

Slowly but surely, western beat â€™em up studios are catching up with their eastern counterparts. Injustice: Gods Among Us was the first in a long time to suggest this; Killer Instinct enforces this notion further.