Itâ€™s like the inevitable summer game drought has come early – just two new releases are arriving at retail this week, and there’s only a small assortment of new games on PSN and XBLA.

We guess that makes the timing of Focus’ action RPG Bound By Flame impeccable, as thereâ€™s little else out. In fact, we have a suspicion that this is going to do very well on PS4 on the grounds that itâ€™s the first proper RPG for the system. Itâ€™s also out on Xbox 360, PlayStation 3 and PC. There’s no Xbox One version, for some unknown reason. 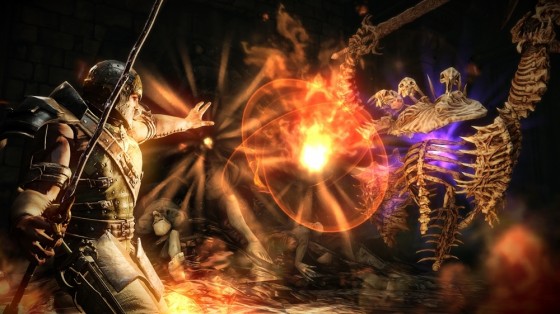 Set in a dark fantasy universe, you play as a mercenary possessed by a flame demon. Thatâ€™ll explain the gameâ€™s title, then. One of the more unique sounding elements is the ability to create â€˜special bindsâ€™ with your companions, giving the choice to turn them into love interests, rivals or friends for life.

French studio Spiders is well versed with RPGs, having created the often forgotten Faery: Legends of Avalon, Of Orcs and Men – which we quite liked – and last yearâ€™s Mars: War Logs. As such, we donâ€™t doubt that the fundamentals will be present and correct. It may however suffer from feeling a bit low budget. Focus arenâ€™t the biggest publisher around, and Spiders aforementioned previous works have too suffered from this. The voice-acting in the PC version of Mars: War Logs was so atrocious that they ended up re-recording most of it for the console iterations.

PlayStation Blog was treated to an in-depth look at Bound By Flame’s crafting system and more back in March. It should give you an idea of what to expect if youâ€™re thinking of taking the plunge before reviews arrive.

The second release of the week? Why, itâ€™s another HD collection for PS Vita. Thatâ€™s not a criticism, there – Sony has done a grand job at bringing some of the PlayStation 2â€™s finest to the handheld. And as usual, God of War Collection will only set you back Â£20 or so. This collection contains God of War and itâ€™s slightly superior sequel, with re-mastered HD visuals and trophies to unlock. It has Cross-Buy support as well between PS3 and PS Vita.

Two of this weekâ€™s PSN offerings also feature Cross-Buy support. Curve Digitalâ€™s retro chic shooter Titan Attacks has Cross-Buy between PS3, PS4 and PS Vita, while pixel-powered party game Sportsfriends is available on PS3 and PS4. Eurogamer couldnâ€™t praise the latter enough, calling it â€œa celebration of the social side of gamesâ€ before handing out a 9/10. 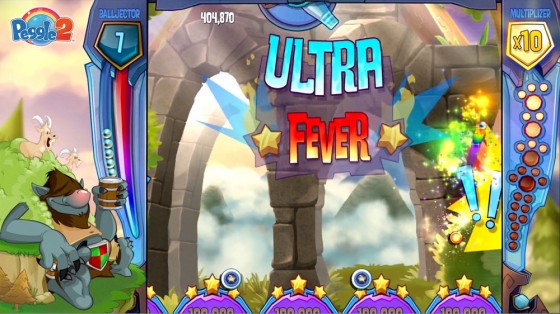 Over on XBLA the Xbox 360 plays catch-up with Peggle 2. Weâ€™ve been playing this a lot on Xbox One recently. Itâ€™s more of the same, and therefore good. The difficulty level ramps up sooner this time round but the new special powers – which differ from one Peggle Master to the next – are slightly more effective than before to counterbalance.