The obvious thing would be to write about Dsmvwld in the manner of its puzzles, omitting the vowels. On the plus side, that would end up looking a tiny bit like something uttered by Zombie Dave. But it would also be unhelpful to the point of perversion. 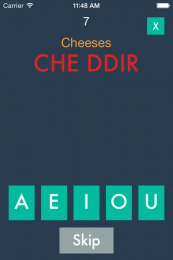 Your task is simple: put the vowels back in the words, names and phrases served to you. The only clue is a category, which changes every few puzzles.

It’s a very slick interface, the vowels presented in a line, which just need to be tapped in the correct order to fill in the gaps. There’s no time limit; no punishment for mistakes, just tap another vowel to try again; and puzzles can be skipped at will. Challenge? Not so much.

That’ll obviously be an issue for many, and you could almost argue that it’s not really a game as a result. But it’s weirdly compelling.

The vast majority of the puzzles are almost immediately obvious; now and then, when you’re clueless about the category, it’s virtually impossible other than by sheer trial and error. But the odd puzzle will set your mind whirring for a couple of seconds, before a moment of absolute clarity. Perhaps the game should offer that moment more often, but the presentation minimises that criticism.

The visuals are as clean and unobtrusive as they look in the screenshots, and being a paid app – albeit a cheap one – there’s no advertising, no clutter, no faffing around. One puzzle follows another without delay, so there’s no chance to take a break: as soon as you’ve tapped in the vowels for one puzzle, it’s put another under your nose – so just do that one, then stop, yeah? And the category might change in a minute. They’re massively wide ranging, from vegetables to crime authors, and it’s strangely amusing when the game switches from one incongruous category to another.

So rather than be annoyed at the lack of challenge, I’m left hoping that developer Ludometrics eventually adds some more modes of play – ones with time limits, or punishments. But in the meantime, it’s a very pleasant distraction – which, sometimes, is all I’m looking for.