Eurogamer was keen to mock the very existence of 2014 FIFA World Cup Brazil, poking fun at its cumbersome name on a handful of occasions, before calling it â€œa very, very well made promotional souvenirâ€ and “a game many of its audience will already ownâ€.

It walked away with a solid 7/10. We whole heartedly agree that in an ideal world this would have been an add-on for FIFA 14. But then EA wouldnâ€™t have been able to charge Â£40 for it, would they? Nope.

Expect it to chart highly next week, although it may not make #1. With the sprogs currently off school, we have a feeling LEGO The Hobbit is going to take the top spot. On a related note, all of this weekâ€™s releases are out today (Thursday) and as such will have an extra dayâ€™s worth of sales behind them. 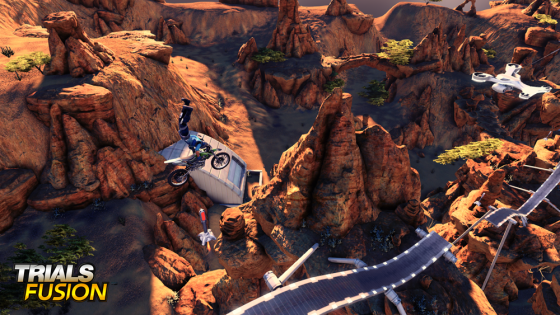 One game that may struggle to break the top ten is Trials Fusion. Quality certainly isnâ€™t an issue. Itâ€™s more to do with the fact that the retail version is almost twice the price as the download release – Â£30-odd in comparison to Â£15.99.

If you havenâ€™t played a Trials game before, youâ€™re in for a treat. Theyâ€™re tough, requiring some gentle engine revs and an acute sense of timing, but theyâ€™re never unforgiving thanks to the impeccable course design. Itâ€™s out on PS4, Xbox One, PC and Xbox 360 (as a download only).

We canâ€™t see PlayStation 3-exclusive Short Peace Rankos Tsukigimes Longest Day making the top 40 at all, although it may do quite well the PS3 chart. Itâ€™s an anime-flavoured side-scrolling platformer of which Suda 51 has lent a hand. The trailer explains it better than we ever could:

If you missed out on The Sly Trilogy when it was released on PS3 back in 2010, here a second chance – the colourful platforming collection this week sneaks onto PS Vita. Itâ€™s worth bearing in mind that the PS3 trilogy can be had for just over Â£10 nowadays, where as this PS Vita iteration will set you back nearer Â£25.

Speaking of belated conversions, Teenage Mutant Ninja Turtles: Out Of The Shadows has quietly snuck onto PSN. We quite enjoyed it when it was released on XBLA last summer, but appear to be in the minority.

Also out on PSN this week: FINAL FANTASY XIV: A Realm Reborn on PS4, along with PS Vita releases Dead Nation (with Cross-Buy support), Ethan: Meteor Hunter (ditto), Putty Squad and Sony Japanâ€™s F2P No Heroes Allowed: No Puzzles Either!

If that last one piques your interest, Sonyâ€™s product page has the skinny. No screenshots though, oddly.