Impatiently waiting for Nintendo to finally reveal Legend of Zelda on Wii U? You should definitely consider reaching for Darksiders II to fill the Hyrulian-shaped void.

Though rather than heading on a quest to save the princess or uncover the secret to a mysterious event; as Death, and his journey to free his brother War from a conspiracy to lay blame for the crimes of the Four Horsemen’s slaughter of the Nephilim. During his excursions, Death encounters the Corruption that is likely to destroy everything. The Corruption is revenge from the first Nephilim, for his downfall at the hands of the Horsemen. It’s a complex tale all throughout Darksiders II, but it never gets too confusing.

As Death, you can swing, smash, hack, slash and swipe enemies with a variety of weapons, each crafted differently with a unique look; and the same goes for armour. Death is of an intimidating size anyway, but slap some cruel looking shoulder pads on him, you feel that he could bulldoze his way through anything. There are heavy influences from other franchises, which are mirrored in the combat system, such as God of War or Devil May Cry.

Couple this with some nifty skills like wall running, and you’ve got a veritable Prince of Persia on steroids on your hands.

The levelling system works fine insofar as making your character stronger, and it opens skill pathways for you to strengthen yourself, giving new abilities or passive skills to put to use, such as summoning. 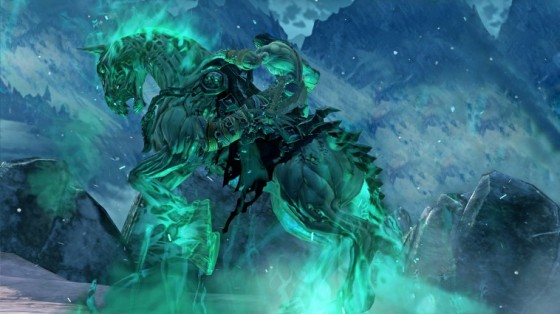 At your disposal is Warâ€™s trusty steed, the aptly named Despair, who serves as a mode of transportation from which you can launch attacks from. One small niggle we encountered while attempting mounted attacks was the wide arc in which you travel around the enemy, making successful hits somewhat difficult.

You also have Dusk, Warâ€™s raven. He is somewhat useless, as his only job appears to be a guide to lead you to your next area if you happen to get a bit stuck. However, sometimes we wondered whether he actually knew the way or not as he seemed to return to his point of origin without so much as a drip from his back end to mark the way.

every bit as epic in scale as you can imagine

Soon you will be awash in loot drops, of varying usefulness. You might be inclined to recycle them as soon as possible, but hold your itchy eco-friendly fingers, because there are armours you can upgrade and make more epic.

The game is every bit as epic in scale as you can imagine. In a similar vein to most Legend of Zelda games, there are dungeons you must plumb, with secrets, treasure and clues for the taking. There are also puzzles of varying degrees of difficulty, though we must admit, we became quite clueless for an hour on one particular puzzle, and felt very silly once we realised how simple it was. Overall, the puzzles arenâ€™t entirely too difficult or easy, but when first faced with them, they can be somewhat intimidating. At the end of each dungeon there are of course wild, large-scale, angry and rampant bosses. 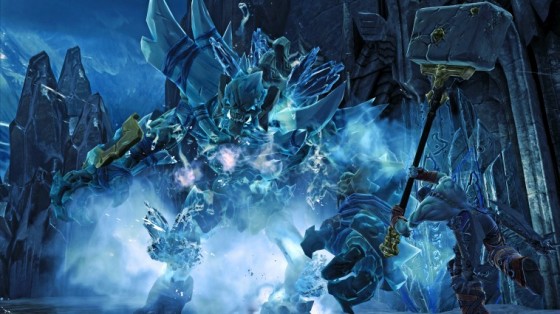 The Wii U version of Darksiders II only has the option for GamePad control. We would have appreciated some compatibility with the pro controller, but itâ€™s not a major issue since the Wii U Gamepad uses the gyroscope for tilting during small portions of action, such as swimming or rolling balls. The controls in general work perfectly, not matter if you’re attacking, dodging, rolling or wall running. The only time you might feel slightly irritated is during the times you use the aforementioned gyroscope. But since you can’t drown, and the puzzle rooms don’t really feature enemies, it’s of no real detriment to the overall experience.

Despite being a launch game for Wii U, itâ€™s still highly recommended. With stunning vistas, expansive environments stuffed to the gubbins with enemies, and dungeons for the looting, chances are you will be playing until you reach the very end of this long-lasting and rewarding adventure and feel ultimately satisfied once you have.