Unsure what a Bitcoin is? Donâ€™t even bother looking for the answer – you may as well just spend those thirty seconds cleaning dirt from under your finger nails. Trust us, thatâ€™s a far more beneficial thing to do with your time. All you need to know is that theyâ€™re the currency in this Xbox Indie city building sim.

Bitcoin Tycoon is a game so simple that it doesnâ€™t even have, or need, a tutorial. Your community starts off small with things like hot dog stands, pizzerias and market stalls. Soon more industrial looking buildings become affordable, including the Bitcoin Corporation itself.

It very quickly becomes clear that the game’s sole purpose is to amuse those who have mocked Bitcoins from day one. A good example here is the ability to â€œbuildâ€ the Winklevoss twins – the Olympic rowers who spent $1.5 million funding some Bitcoin payment processor.

Every structure generates something, be it Bitcoins, produce, popularity or red tape. Yeah, we’re confused by that last one too. Resources then have to be collected by moving the cursor over the top of each building. This task is about as demanding as Bitcoin Tycoon gets; neglect this duty your businesses will cease to produce goods and generate cash.

Just to illustrate how simplistic the whole thing is, only one button is used throughout. Buildings canâ€™t be rotated. There are no roads, power lines, trees or anything of the sort – you place buildings, power generators and thatâ€™s it. Is your town not popular enough to unlock the next building on the list? Just build a few more building that generate popularity. Short on Bitcoins? Wait just a minute or two and then youâ€™ll have more than enough.

The ultimate goal is to build a shrine to Bitcoin creator Satoshi. This shrine is the most expensive thing on the list, but even so we managed to afford one after around thirty minutes of play. The game doesn’t end once the shrine has been built, but it’s hard to see why anyone would want to continue as there’s no save option. Or indeed any options at all. 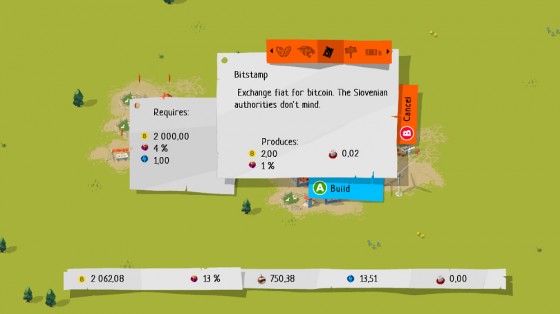 By this point it should be clear that the whole game is designed to be an elaborate in-joke. There are no economics to worry about and every structure generates cash or produce, no matter where its placed on the screen. It genuinely pushes the very definition of the word ‘game’.

What strikes us as being really bizarre though is that obviously a great deal of effort has gone into the appealing pixel art. We really like how the game looks, but all that hard work is for a few amusing building descriptions and nothing more. Consider us baffled.