EA wasnâ€™t lying when they claimed the Xbox 360 version of Titanfall was in safe hands. Over the years Bluepoint Games have made a name for themselves by releasing a steady string of quality HD conversions, including Konamiâ€™s MGS HD collection and Sonyâ€™s pairing of Ico and The Shadow of Colossus.

Titanfall however is their biggest project yet. Bringing an older game with a HD makeover to a newer system is one thing. But to do the opposite? Now thatâ€™s a challenge.

Bluepointâ€™s expertise with conversions is notable from the outset. Save for some slightly less impressive explosions and a few grubby textures, it exceeded all expectations. To be handed a game that makes the Xbox 360 feel shiny and new all over again, especially this late in the systemâ€™s life, is something we never expected. 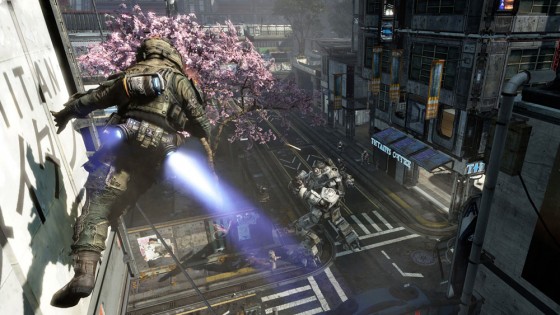 As youâ€™ll no doubt be aware, Titanfall wasnâ€™t just intended to show off – ergo sell – the Xbox One, but to also to give the FPS genre the kick up the behind that it so sorely needs. The titular titans are the obvious unique addition. Youâ€™d think that the ability to stomp around in a mech would be a reward of gaining a certain amount of kills – just like Call of Dutyâ€™s killstreak perks – but thatâ€™s pleasingly not the case. Regardless of skill level, every player get a couple of chances to summon a Titan per match.

These hulking beasts are more vulnerable than you may expect. Not only does every pilot carry an anti-Titan weapon, and itâ€™s also possible to boost jump onto their shoulders for a spot of Titan rodeo.

Moreover, their shields deplete quickly. Keeping your Titan alive for lengthy periods takes a degree of skill, and as you adapt to boosting out of harmâ€™s way and using Vortex shields to fling bullets back at enemy Titans youâ€™ll find yourself in the cockpit for much longer. If you donâ€™t want to run around in a Titan, preferring to capture hardpoints and take out enemies on foot, the option to put your Titan into AI guard mode is there. They can also be instructed to follow you, which is highly useful during the final moments of a battle – a frantic dash to an evac point. Suddenly the players who have been hounding you the whole game become little more than fleeing rabbits. 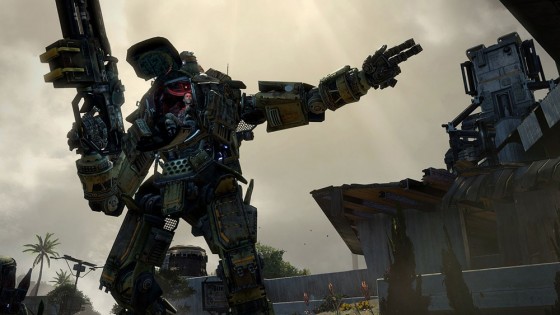 It speaks volume that playing as a pilot is just as exhilarating as getting behind the controls of a Titan. Parkour (aka free running) plays a huge part in this. Pilots can run along walls to travel great distances in a nary a blink of an eye. This helps to keep the pace fast throughout. Double jumping via a booster pack meanwhile allows rooftops to be accessed with considerable ease. At first we thought it was a little odd that you couldnâ€™t choose where to respawn from after dying, but soon this design choice became forgotten on the grounds that you can get across the sizeable maps with just a few well-judged jumps.

We also found the 12-player limit odd at first, but this was likewise soon forgotten. There is no respawn waiting time – youâ€™re back in the battle at a push of a button, and so the battlefields never feel empty. AI controlled grunts and robotic spectres also provide something to unload magazine clips into. Theyâ€™re little more than cannon fodder, but the battlefields would certainly seem less chaotic without them. Enemy spectres can also be reprogrammed to fight on your side – a touch weâ€™re quite fond of. 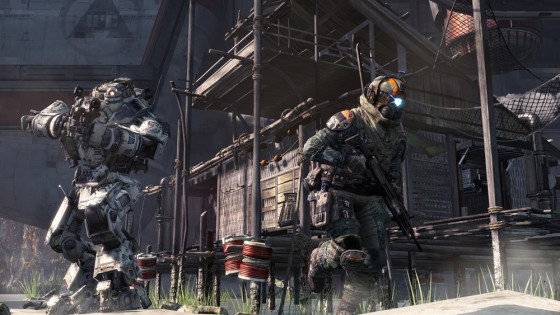 Usually when a game toys around with numerous new ideas it ends up being a bit of a mess. Thankfully thatâ€™s not the case here – all the cogs, so to speak, come together perfectly. The lack of a single-player mode is lamentable, although there is a three hour online campaign to play through. This should be your first port of call after playing through the tutorial, as by the end of it you will have levelled up enough times to unlock the option to customise units and use burn cards – single use consumables that increase fire-power of certain weapons, shorten Titan build periods and such. These help to even the battlefield, giving newcomers a chance against experienced players.

From here on in Titanfall shouldnâ€™t just be remembered as being the Xbox Oneâ€™s first true system-seller, but also as a reminder of what the humble Xbox 360 can achieve when tickled in the right places.

For that, we have Bluepoint to thank.

Screenshots taken from Xbox One version. EA has seemingly “forgotten” to release any Titanfall Xbox 360 screenshots