Finally putting an end to countless rumours, Amazon has revealed their master plan to dominate living rooms all over the world. The front room assault begins today – the $99 Amazon Fire TV is available to purchase now in the US. 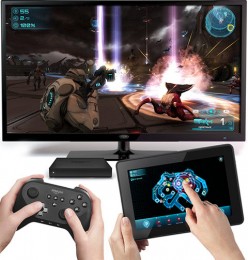 Amazon refers to it as a â€˜1080p media playerâ€™ although calling it a â€˜gloried set-top boxâ€™ isnâ€™t too far off the mark.

Currently the online retail giant seems to be pushing the movie steaming side of things heavier than the systemâ€™s ability to play games.

The trailer below shows off the systemâ€™s graphical capabilities:

Sev Zero is available for free with the additional game controller (priced $39.99) or $6.99 otherwise. Although Amazon reports that tablets can also be used as controllers, the game controller is essential for some releases. 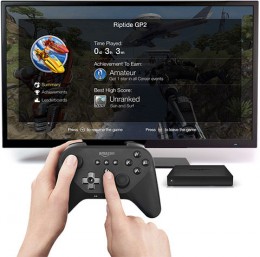 Incidentally, all in-app purchases are paid for with â€˜Amazon Coinsâ€™ with 1,000 coins currently clocking in at $10.

Admittedly, itâ€™s hard to get excited about yet another Android-based console, but the fact that Amazon has assembled a studio to provide exclusive software is kind of exciting. Amazon’s sneak peek trailer – uploaded to YouTube today – shows various unannounced games, many of which appear visually accomplished.

Keep an eye out for the game at (0:30), featuring dinosaurs carrying colossal laser cannons. Now that looks like something we’d like to play.

No doubt the rush is on to create the systemâ€™s very own Angry Birds or Candy Crush Saga. Or maybe even the next Halo – who knows?