Itâ€™s easy to forget that a couple of decades ago many publishers relied almost solely on movie tie-ins to turn a profit. Itâ€™s not quite as easy to forget just how awful the majority were – your current favourite movie being transformed into generic 2D platformer was about as much as you could have wished for.

Every now and then though a developer dared to break the mould. Ghostbusters was surprisingly ambitious and the Robocop and Alien 3 games still hold up even today, but still, many classic movies didnâ€™t get the videogame treatment they arguably deserved.

In short: we’re all for developers dusting off the rights to much loved movies. Our perfect vision for the Rambo license would be a free-roaming Far Cry 3 style adventure, with grizzly knife kills, stealthy bow and arrow bits and plenty of pretty explosions. Polish developer Teyon sadly doesnâ€™t share our vision, instead seemingly taking inspiration from SEGA’s Rambo light-gun game from a few years back. In essence, it’s an on-rails shooter spanning the Rambo trilogy, with a handful of QTE sequences thrown in for variety. A light-gun shooter for a console without a light-gun, pretty much.

The studio has made on-rails shooters before, including 2013â€™s budget-priced Heavy Fire: Shattered Spear, and theyâ€™ve clearly learned from past mistakes. Checkpoint placing is thankfully far more competent than in Shattered Spear – which we gave a miserable 2/10 – and the cover system is also far easier to get to grips with. Even so, you never feel fully safe as occasionally youâ€™ll see bullets whizzing through whatever obstacle youâ€™re crouched behind, nipping away at the health bar while you attempt to jam more bullets into Ramboâ€™s rifle.

The reloading system is very similar to that seen in Gears of War – time a button press perfectly and youâ€™ll be rewarded with 50% extra ammo. This is handier than it may sound as the score multiplier system is partly based around chain killing enemies using just one clip. Thereâ€™s also a ‘wrath meter’ to keep your eye on. Once full, a slow-mo feature can be activated during which every kill provides a health boost. Later missions feature flame-thrower units and grenadiers in greater numbers, and so activating Ramboâ€™s wrath when plenty of enemies are around – in order to fill the health bar back up entirely – is crucial. 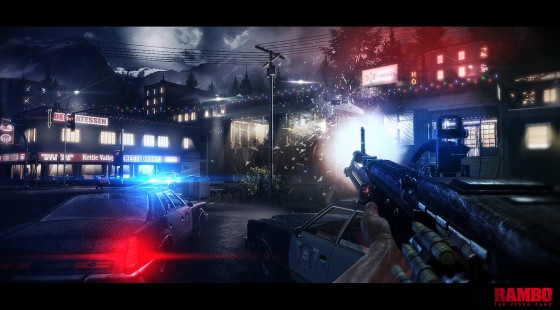 Not every mission involves relentless shooting, as some slower paced stealth sections feature too. On-rails stealth sections, of course. The chance to use Ramboâ€™s bow for silent kills is one of the gameâ€™s few highlights, but these missions are few and far between. Itâ€™s a shame as when Rambo is sneaking past spotlights and taking out guards one at a time – via a well timed button press – not only does the game look its best, thanks to some reasonably fancy lighting effects, but itâ€™s also at its most atmospheric.

Presentation elsewhere is patchy at best. Some Rambo character models look better than others, while speech samples vary from crystal clear to almost inaudible. This level of inconsistency carries over to the rendered cut-scenes, with a few resembling something from the 32-bit era. Make no mistake – this is a very low budget affair.

Although ugly and a little broken in places – much like Rambo himself – thereâ€™s still enough variety at hand to keep things interesting until Rambo IIIâ€™s gung-ho conclusion. One early mission sees Rambo fighting off cops, and because Rambo is no merciless cop killer there’s a focus on using non-lethal shots. A helicopter mission meanwhile gives two minutes to raze an enemy base to the ground. Itâ€™s hardly taxing stuff, yet it does prove to be surprisingly entertaining…if only because of the iffy destruction physics. The final mission may frustrate however – with heavy units around every corner, progressing from one checkpoint to the next can be a challenge even on the easiest difficultly level.

That final mission takes around three to four hours of playtime to reach. Suffice to say, itâ€™s the â€˜score chasersâ€™ that will get the most out of this. Earning two stars for each mission is no easy task, let alone a perfect three star rating. In fact, we firmly believe that some of the target scores are impossible without unlocking the score-boosting perks beforehand. These are gained by rising Rambo up ranks; a task which thankfully doesnâ€™t take all that long if you go back and replay previously completed missions. 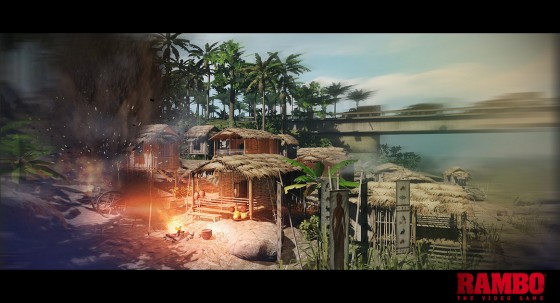 We also suggest holding off attempting the â€˜Green Beretâ€™ difficulty level until the majority of perks and upgrades have been unlocked, as without them Rambo doesnâ€™t last barely five seconds out of cover. Achievement hunters should also be aware – getting gamerscore out of this is like getting blood out of a Stallone.

We came to Rambo: The Video Game expecting very little, even fearing it would be approaching unplayable. Thankfully Teyonâ€™s previous experience with the genre has resulted in this being a competent enough shooter, albeit one thatâ€™s marred by a minuscule development budget. Had it been a Â£9.99 (or thereabouts) digital release we could have looked past its visual and technical shortcomings, but at Â£25 the chance to step into Ramboâ€™s blood covered boots for a few hours comes at a hefty price.