It may seem odd that a Virtual Console release headlines this weekâ€™s Nintendo eShop rooster, but Super Mario Kart isnâ€™t your typical game – this is where Marioâ€™s karting career began, quickly spawning countless clones. An outright classic, it’s one of the best multiplayer games of the 16-bit era…and beyond.

To celebrate its release on Wii U VC this week, Nintendo has arranged a special offer – buy before 30th June and youâ€™ll receive Â£5.49 off the price of Mario Kart 8 when it arrives on the eShop. Â£5.49 is also the price of Super Mario Kart, incidentally, which means youâ€™ll be getting it for free. The only problem is that Nintendo fails to mention how much Mario Kart 8 will cost to download. We presume Â£39.99 – just like Pikmin 3 was – but canâ€™t be certain. 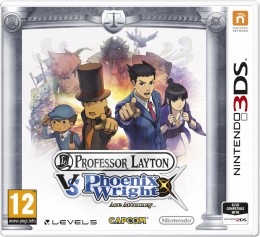 Professor Laytonâ„¢ vs Phoenix Wrightâ„¢: Ace Attorneyâ„¢ – trademarks left in for comical effect, there – is a good example of Nintendoâ€™s wayward digital pricing. Itâ€™s set to cost Â£39.99 when it arrives on 3DS eShop this Friday, in order to coincide with the retail release. Thatâ€™s around Â£10 more than it can be found for online. Ho hum.

Thereâ€™s a handful of other VC releases arriving this week too. Tecmo-Koei are releasing Mighty Bomb Jack and Ninja Gaiden for Â£3.49 a pop on Wii U VC, while Master Higgins hops onto 3DS in Adventure Island II, priced at Â£4.49. All three are decent and well-remembered games. Mighty Bomb Jack in particular is well overdue a remake of some sort.

The only other new arrival is Skater Cat on 3DS, from Teyon. The trailer fills us with some encouragement – it looks fast and colourful, if nothing else – but we strongly doubt itâ€™ll be the handheldâ€™s answer to OlliOlli on PS Vita:

As for this weekâ€™s discounts, F1 Race Stars: Powered Up Edition – which launched on Wii U just a few months ago – is being dropped to Â£9.99 already, while Snow Moto Racing 3D and Real Heroes: Firefighter 3D fall to Â£5.39 and Â£4.49 respectively.

Snow Moto Racing 3D is apparently not too bad, while a Metacritic of 49% for Real Heroes: Firefighter 3D would suggest that itâ€™s far from being hot stuff.