It’s a giant egg, but there’s no Billy Hatcher in sight. 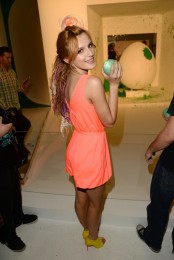 This was a Nintendo of America PR event for Yoshi’s New Island, where they got young celebrities to throw what look like paint bombs at a giant egg.

The end result was actually quite effective, don’t you think? A good PR event, then, but apparently not such a great game. Shame that.

That to the right is a child called Bella Thorne, who I’m told is from a programme called Shake It Up!.

History does not record whether the paint bomb she is about to throw hit the giant egg or not.

Elsewhere in that fancy USA, all and sundry descended on Austin, Texas for the annual SXSW festival. Amongst the numerous bands playing countless sets to disinterested industry types, there was some games stuff going on too. Like this panel session, unveiling Tales from the Borderlands.

It’s a story-driven episodic series set in Borderlands universe. As the description might logically suggest, it’s a collaboration Telltale Games and Gearbox Software – and both companies were represented on the panel. The 47:53 long session is on YouTube if that’s the sort of thing you do. 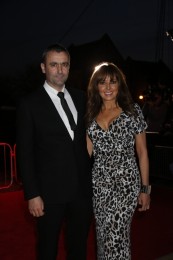 Back to Blighty, and this week saw the glitzy BAFTA Games Awards in East London.

The Last of Us triumphed, picking up five awards; there were three for Grand Theft Auto V, and a Fellowship for Rockstar Games; Papers, Please beat the likes to Forza, XCOM and Civilization to the Strategy and Simulation award. All good stories.

But not the headline, at least according to the likes of the Daily Mail. No, that was the attendance of advertising’s own Carol Vorderman. I know, Vorderman! Imagine! Such glamour is beyond comprehension.

Finally, in companies sending out photos of their offices news, this is the new Mexican studio of game localisation specialists Pink Noise.

It looks quite nice. Well done them.