Itâ€™s a reasonably busy week for new arrivals on the Nintendo eShop. Thatâ€™s where the 3DS is concerned, anyway – the Wii U sees just two Virtual Console releases and a few discounts.

Those two new additions to the Virtual Console catalogue are the NES iterations of Double Dragon and Super Dodge Ball, priced at Â£3.49 each. Theyâ€™re the US versions, if that means anything to you. 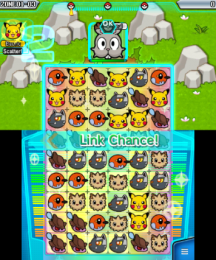 On the 3DS eShop PokÃ©mon Link: Battle! (Â£7.19) takes the lead. A sequel to the 2005 DS sliding tile puzzler (known as PokÃ©mon Trozei! in the US), it features over 700 of the collectable critters and a local co-op mode for four-players.

There are no reviews currently, but the original was well received and itâ€™s also hard to imagine just how Nintendo could possibly mess the formula up. The inevitable appearance from Mr. Mime notwithstanding.

Thatâ€™s being joined by Cube Tactics (Â£4.49), a game which invites you to become a â€˜Cube Masterâ€™ by building an army and then strategically battling it out on cubic battlefields.

The video on Nintendoâ€™s site should give you a clearer idea than our vague description. Hey, donâ€™t blame us – even the press release fails to describe it fully.

Then thereâ€™s Cubit The Hardcore Platformer Robot, a one button platformer that resembles an endless runner but in fact isnâ€™t – there are three different endings, as well as a final boss to beat. It looks a little rough visually, but at Â£2.69 such shortcomings such can be excused.

Yoshi’s New Island (Â£34.99) is also due to arrive on the eShop on Friday to coincide with the retail release. Weâ€™re still waiting for reviews to hatch, but in the meantime Nintendo has released a new video showing what to expect from the pastel-hued 2D platformer:

Thatâ€™s it for new releases this week, but there is a sizeable amount of discounts. The Luigi-themed sale continues for a second week running, including Dr. Luigi for Â£8.99 and Super Mario Bros. 2 on Wii U and 3DS for a bargain Â£1.74. Luigi’s Mansion 2 on 3DS is being dropped to Â£31.99 also, but itâ€™s hard to consider that a decent discount even if it was Â£39.99 to begin with.

As for third-party discounts, Marvel Pinball 3D and Star Wars Pinball on 3DS are down to Â£3.14 until 20th March while Zen Pinball 3D falls to Â£2.24 until then too.

Theyâ€™re all well worth a look, as is BIT.TRIP Presents… Runner2: Future Legend of Rhythm Alien on Wii U which is Â£3.33 until next Thursday. One of the best Wii U eShop titles for the cost of an irregularly priced sandwich? Sold!