Agent Kendall, low level FBI computer technician, gets given the go ahead on a top arson and terrorism case. She’s everything a fictional female FBI agent should be – good looking, smart, fit, and incredibly over-proportioned. Or polygon heavy, if you prefer.

A remake of a game first released in 2011, Bureau: Kendall Rising is offered as an ‘Action and Adventure’ title on the Xbox Indie service but a ‘point and click detective mystery’ would be a much farer description.

What at first promised to be an entertaining ride full of arson, crime scene investigation, gratuitous cleavage shots and anti-extremist extremism (yes, really), did sadly end drying up quicker than Pamela Anderson in a tanning salon.

The dynamic between agents Kendall and Kyler bears some resemblance to Mulder and Scully, if we try and imagine for a second that the X-Files took place in the porno world. Agent Kendall, with her heaving chest and skimpy outfits, sometimes pushed the boundaries of realism, and we don’t mean by being able to stand up straight with the two behemoths on her chest. Kendall finds it completely normal and very suitable to turn up to crime scenes on a motorbike in nothing more than a bikini and jacket, with nary a gun holster in sight. Never mind the unashamed flirting between herself and pretty much anyone on two legs, suspects included.

Kendall, being a computer whizz, is able to perform background checks on suspects, opening up new topics for questioning, in an attempt to get closer to getting some answers. Play your cards right and perhaps a couple of the suspects will offer you a little more than you’d bargained for. Expect Agent Kyler to chew you out on it though. 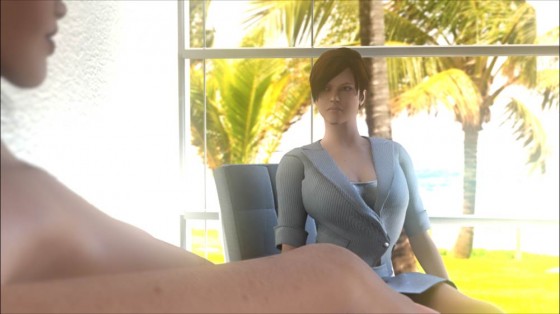 Dialogue options give the chance to either play as a straight-laced Agent Goody-Two-Shoes, or Agent Free-Wheeler-McSassington. Neither options will have a bearing on the outcome of the case, but they do at least alter how people react to you for that dialogue sequence.

Conversation is written rather well, and the voice acting is much better than we could have anticipated. However, many of the mechanics of the game take care of themselves. Unskippable cut-scenes when driving between locations waste time unnecessarily; dialogue choices playing out between the two speakers without any input causes issues sometimes as Kendall’s voice is somewhat deep, making it possible to miss sections of dialogue, which don’t get repeated. There are subtitles, but they don’t always match, despite being a direct transcription, and sometimes words are missing. There are no subtitles for monologues either, so if you can’t hear, you’ll miss it entirely.

Graphically, at times it felt like playing a PSone game, with sometimes detailed scenes deteriorating into Super Nintendo looking chaos. Most crime scenes already have evidence laid out obviously on the floor for you to find, and there is an indicator at the top of the screen so you know how many you have found and how many are left. Handy.

There is a basic time-limit of a couple of days to speak to all suspects and finger the culprit, but there are only so many hours in a day. Spend too long background checking, and you might lose out on time to interview people; spend too long interviewing and you might not be able to unlock new topics to talk about. Irritatingly, you can only unlock one new topic per day, so time will be spent going back home, doing more research and changing topic options, which could be better if set within a menu at the scene. If there is a reason it has been done this way, it escapes us. Spend too long all round, and you’ll fail the case, putting you right back at the start of the game, with no way to skip dialogue or rush through the things you’ve already done.

At the end of each day, you will be rewarded with a gratuitous nude scene with Kendall. She spends her evenings on the phone near naked talking to her â€œspecial agentâ€ on the phone, followed up with a dive in the pool. Other suspects are also decidedly freely dressed, or in some cases not dressed at all. Because it’s totally normal to open the door to the FBI completely naked and then tell them to pretty much join in or leave.

At 69p, Bureau: Kendall Rising is definitely worth a shot. It’s…almost good. Almost.

Boasting an original score, multiple endings, cut-scenes and full voice acting, it kind of makes up for the fact that some elements of the game are so unrealistic or poorly planned. A game obviously made by guys for guys. A manly man’s game. Because it seems it doesn’t really matter how incredibly unbelievable a game is, as long as you’ve got something to soften the blow along the way. Like two soft chest cushions.

Wannabe high flying FBI agent, good looking, witty… licensed to thrill rather than kill. These are just some of the words we’d associate with protagonist Agent Kendall. Some others for the game itself would be; slightly sexist, male wish fulfilment, and a little bit cheap.