You can bet your last dose of Zombrex (it exists, right?) that this year will see the release of many collections, trilogies and such for PlayStation 3 and Xbox 360. They offer publishers the chance to squeeze a little bit of extra money out of their back catalogue, and as long as they arrive at a bargain price we arenâ€™t going to complain.

Even though Xbox 360 owners were given the chance to download Dead Rising 2 and its prologue for free last year – as part of the ‘Games for Gold’ promotion – the Â£20 (or thereabouts) price-tag for Dead Rising Collection is justifiable by the inclusion of â€˜Off the Recordâ€™. This standalone spin-off still sells for Â£10+ on the likes of Amazon, and chances also stacked high that most people overlooked it when it was first released. 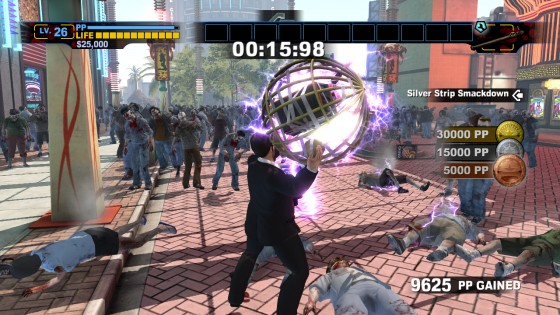 Itâ€™s easy to see why. There was a good year between Dead Rising 2 and â€˜Off the Recordâ€™ yet some critics still found it hard to recommend revisiting Dead Rising 2 so soon. Fans likewise called it a â€œcynical cash-inâ€ because there was little reason why it couldnâ€™t have been released as a piece of inexpensive DLC. The setting, boss battles and a lot of the cut-scenes are the same but the plot has been re-jigged to an alternate â€œWhat if?â€ scenario. To be more exact: â€œWhat if renowned photographer Frank West encountered the zombie outbreak instead of Chuck Greene?â€

If the short intro to the new co-op sandbox mode is to go by, Frank would treat it as a vacation. Thereâ€™s a new Uranus Zone theme park area to explore and mess around in, and Frank also carries his trusty camera, thus bringing back the original Dead Risingâ€™s photography mechanic. Photos fall into various categories – ranging from horror to erotica – and bestow a small XP boost should the snap contain a shot of something rarely seen, or unique. There are also 75 stickers to keep a beady eye out for, placed in the most unlikely of places. So unlikely, in fact, that youâ€™d probably need a guide to find them all.

This is exactly what I resorted to. Like Dead Rising – arguably the first Xbox 360 title to fully understand Microsoftâ€™s intention for achievements – â€˜Off The Recordâ€™s achievements are based on a pleasingly long list of daft things to do. Only 5 of the 50 achievements are story-based – the majority of the rest can be unlocked from the outset, although some are obviously more time consuming than others. It has been suggested that obtaining the achievement for killing 100,000 zombies alone can take a good eight hours. The best way to do this, incidentally, is to purchase an SUV and drive it up and down the Platinum Strip area. 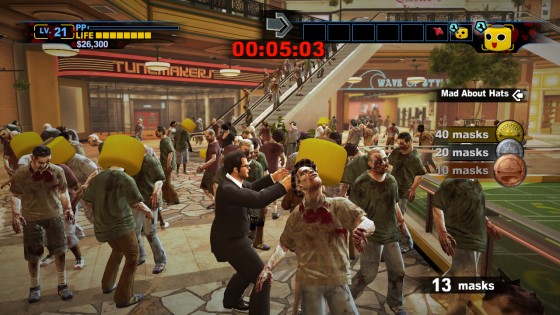 I soon found myself making a mental note of things to look out for while cracking on with the mission objectives – which retain their tight time limits – but because of their sheer amount it wasn’t long until that list became physical. Making a zombie slip in a puddle of vomit, taking a photo of a co-op buddy, dressing as a woman, playing a mini-game in the Uranus Zone and getting a random survivor drunk came easily.

Trying to complete challenges in the co-op mode less so – it would seem the surprisingly high number of people still playing online would rather harm zombies than take part in the bite-sized challenges. Which is a shame, because some are inventive – trying to draw a large crowd of undead to the edge of a theatre stage, via firecrackers and other colourful distractions, springs to mind. Thereâ€™s also some dubious fun to be had by trying to kill 10 zombies in one fell swoop via one of the Uranus Zone theme park rides. Now thatâ€™s something you donâ€™t get to see at Alton Towers.

It also turns out that Dead Rising a perfect fit for Vine videos. Here’s us taking a selfie with a zombie and treating a zombie to a ‘smashing’ time.

The complaints originally aimed at â€˜Off the Recordâ€™ have become negligible over time. Had I played it when first released, I think I would have found it too similar to Dead Rising 2. Four years have passed since then though, and although some boss battles and cut-scenes ring a bell, the timing was right for a play through. A few arguments were also once made regards the price tag – an RRP of Â£19.99. Again, thatâ€™s negligible now itâ€™s available as part of a bundle.

If you ever want to revisit the Willamette Mall and its surroundings, with their garish coloured exterior and worryingly high amount of womenâ€™s clothing shops, then â€˜Off the Recordâ€™ is the way to go. Can you teach a zombie to smile for the camera?