EAâ€™s plan to take Plants vs Zombies – PopCapâ€™s much loved 2D timewaster – and turn it into a third-person class-based shooter did initially sound disastrous. Yet with some attentive nurturing on behalf of the newly formed PopCap HD studio, weâ€™re reminded of that not particularly well-known phrase: â€œFrom tiny acorns mighty online shooters grow.â€

Gears of War provides the bulk of inspiration, rather than EAâ€™s own Battlefield series. Some may even be surprised to learn of this. The four-player co-op ‘Garden Ops’ mode bares a startling resemblance to Gears of Warâ€™s Horde mode in particular, only with a far brighter colour palate. Maps may be few in number but theyâ€™re surprisingly large and varied, offering three different locations per map to place a garden homestead. AI-controlled zombies then appear in waves of increasing strength and number. 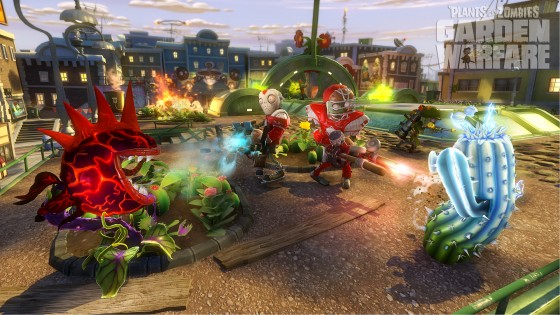 After the tenth final wave has been defeated a mad dash back to Crazy Daveâ€™s campervan ensues. Staying alive until Dave arrives can be a tricky task, no thanks to the sheer amount of zombies that quickly swarm towards the pick-up point.

As well as random â€˜special wavesâ€™ against certain enemy types, both waves 5 and 10 feature super-sized bosses that are randomly selected via a slot machine. Every now and then the slot machine will cough up some bonus cash too, which is used to purchase packs of stickers.

Stickers not only boost your arsenal of plants and zombies, which can be strategically placed at pre-determined places to protect your turf, but can also provide the chance to respawn instantly and give the whole team an instant retry when playing ‘Garden Ops’.

The inclusion of these consumable, single use, items did briefly give cause for concern – we were worried that unlocks would be scarce, prompting dreaded micro-transactions. Thankfully thatâ€™s not the case. Even matches that end unsuccessfully reward enough cash to buy one or two packs of stickers. Spend your time playing a variety of modes and youâ€™ll find yourself amassing a sizeable assortment. 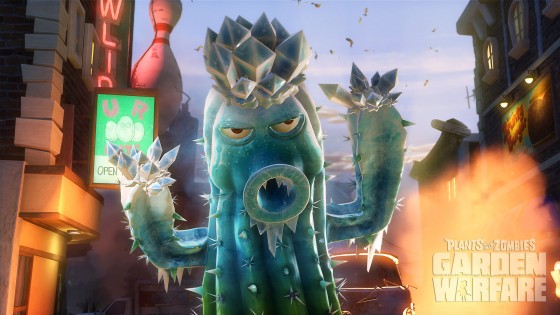 Some sticker packs – the more expensive ones, especially – additionally contain rare customisation options, allowing the colourful cast of characters to be kitted out with a suitably eccentric range of hats, sunglasses, tattoos and other attire. These extras may sound superficial, but they do help to give your squad that personal touch.

Zombie stickers can only be used to summon the undead during ‘Gardens and Graveyards’ – an instantly likeable big team battle for control over several key locations. Maps here are large too, with one involving a final battle on a small island thatâ€™s accessible only via cannon. Being able to guide your zombie while they fly through the air allows the chance to choose your landing zone. A nice touch. Another city-based map sees the zombies taking over down town one building at a time, including a taco restaurant and eventually a large garden centre. Some matches extend into overtime, while others can end early if a team retains total domination of a location for a long period.

As well as deathmatch mode ‘Team Vanquish’ thereâ€™s also a similar mode in which no upgrades or customisable options are allowed, thus offering a purer experience. 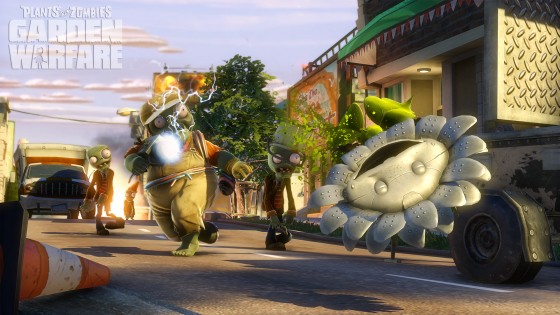 With just three match types, Garden Warfare is a tad light on content. Trying out and levelling up each of the eight character types is oddly compelling, fortunately. The two warring factions each have four different character classes, and theyâ€™re impeccably well balanced. Not a single character feels out of place, or even underpowered.

Peashooters and zombie foot soldiers are the all-rounders, able to cause respectable amounts of damage. The cactus takes the role of the sniper, who can also send a drone into the air to rain fire (read: popcorn) onto foes below. The zombie engineer too has a drone, along with the ability to set up teleporters. Sunflowers and scientists are the medics of the plant and zombie worlds respectably, both able to drop items that restore health. They can also revive the fallen quicker than anybody else.

This leaves us with the bulbous-headed chomper and the zombie squadâ€™s sportswear-equipped all-star. Chompers are the most nuanced of all, taking a degree of experimentation to get to grips with, while the all-star can put up blockades and charge at the opposition. Getting a good mixture of characters per match is critical – ideally one player at least should play as a sunflower during ‘Garden Ops’. 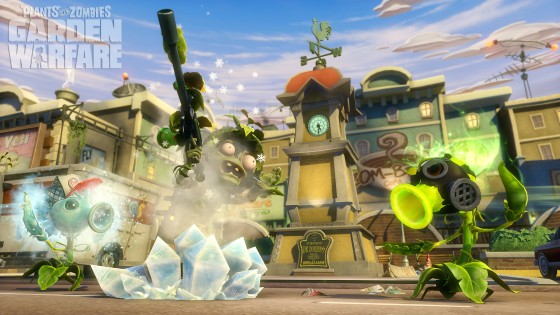 All of the aforementioned skills are locked bar one per character to begin with, with an additional two unlocking once certain challenges have been beaten. The majority of these can be completed without any real effort, and so it doesnâ€™t take much more than a couple of matches to unlock each characterâ€™s full skill set. Skill cooldown periods are pleasingly brief, while respawns are pretty much instant. This helps to keep the pace fast flowing, and every battle as relentless as the last.

Recent mobile hit Plants vs Zombies 2 proved that PopCap not only knows their product well, but also has the utmost respect for it. Even though Garden Warfare sees the cast transported into the realms of 3D, no disrespect to the franchise has been caused in the slightest. It remains jolly and light-hearted, with the zombies looking as delightfully goofy as ever. Vibrant presentation aside, itâ€™s a decent shooter in its own right too. Nuances may be slight – like using the cactiâ€™s tallnut blockade to reach higher areas – but they are present, giving those willing to experiment a tactical edge.

As the yearâ€™s biggest surprise so far, weâ€™re already eager to see what PopCap HD has planned next.