Now hereâ€™s a feature that has spent some time on the back burner. Once scheduled to coincide with The Stick of Truthâ€™s original release date – back when THQ was still breathing – weâ€™ve held it off time and time again following the numerous delays.

With Obsidianâ€™s RPG finally out this week, weâ€™re mildly pleased to present this slightly uneventful history of South Park games. Yes, there have been more bad ones than good, but you canâ€™t blame us for that.

You can, however, blame Acclaim – their disrespect for licensed games is what ultimately lead to both themselves and fellow publisher THQ going bust. Well, that and THQ manufacturing approximately 20 billion uDraw tablets.

If memory serves, there was a bit of a buzz surrounding the first South Park game. South Park fever was in full swing – you even couldnâ€™t step into Clintonâ€™s Cards, of all places, without tripping over merchandise – and so the videogame press of the era were keen to give it plenty of exposure. It even took the cover of Futureâ€™s respected Arcade magazine – a move they later apologised for.

Although Acclaim had a reputation for churning out bad games during their 16-bit days, they managed to turn their repute around by becoming one of the N64â€™s most prolific publishers. They understood that although the risks for developing for the N64 were high – mostly due to pricey cart costs – if the product was good enough, it would sell incredibly well. The original Turok reportedly managed to turn a huge profit, selling over 1.5 million copies. 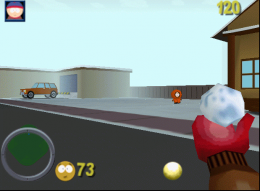 South Park however saw Acclaim fall back onto the license for sales. Seemingly rushed out to cash-in on the showâ€™s success, it was ostensibly a re-skin of Turok 2. Snowballs replaced arrows; the mini-gun became a rapid fire foam dart launcher. And the much celebrated cerebral bore? That was changed into a weapon that made characters unwillingly sing and dance, rather than drilling their brains out. Visually crude, with the notorious â€˜N64 fogâ€™ in full effect, it simply saw the South Park gang fighting off swarms of mutant turkeys, robots and other enemies while trying to save their home turf. Most reviewers found that it was beyond repetitive, in respect of both enemy attack patterns and use of speech samples.

The PSone version didnâ€™t arrive until almost a year later, featuring notably poorer visuals. A Game Boy Color South Park game was also in development, but eventually canned due to Trey Parker and Matt Stone reportedly believing it wasnâ€™t a good fit for a system with such a young demographic. Acclaim later re-used the engine and some of the art-work for cartoon tie-in Maya the Bee, which incidentally, was re-skinned once again to become the New Adventures of Mary Kate & Ashley in the US. A quick glance on Google suggests that it actually wasnâ€™t a bad little game, should you ever want to discover what could have been.

The Dreamcast had only been available in the US for a month prior to Chefâ€™s Luv Shack’s release, and following poor reviews it was wildly regarded as one of the DCâ€™s worst games, joining the likes of Acclaimâ€™s own WWF Attitude. The whiff of â€˜rush jobâ€™ was undeniable – it was, for most part, a dull quiz game. The mini-games meanwhile were heavily influenced by the arcade classic of yore – â€˜Asses in Spaceâ€™ was a clone of Asteroids, while â€˜Bad Kittyâ€™ was based on Donkey Kong. There was also a â€˜Whack-A-Moleâ€™ game, presumably because itâ€™s written in stone somewhere that every mini-game collection must include one of these.

Oddly, the PC version removed all multi-player support – the gameâ€™s only positive feature – leaving the player to compete against CPU opponents only. We should also spare a thought for those who shelled out for the N64 version. With the majority of N64 games retailing for Â£49.99 at the time, that must have been heavy blow to the wallet.

Acclaimâ€™s third and final South Park game was the best of the bunch, although to be fair thatâ€™s not saying much. Released to coincide with South Parkâ€™s third season, the PSone, N64 and PC iterations launched alongside one another with the Dreamcast version belatedly appearing six months later.

Acclaim tried their hardest to convince the press that the Dreamcast version would boast many improvements, and although it was the best version visually, there was no shaking the fact that it was little more than a poor manâ€™s Mario Kart. So much so that Trey Parker and Matt Stone distanced themselves from it, presumably following the critical mauling the previous South Park games had received. The showâ€™s creators are known to be massive videogame fans, and even went as far as publicly criticising Acclaim for the way they handed the license.

Fun fact: the box-art wasnâ€™t designed by Acclaim or even developers Tantalus Interactive, but rather a random South Park fan. Acclaim apparently took a shine to the creatorâ€™s CGI handiwork and asked permission to use it.

We arenâ€™t entirely sure why nine years lie between South Park Rally and this download-only tower defence game. Itâ€™s not as if South Park has ever been off the air for a lengthy period or has faced cancellation in the same way Futurama or Family Guy once did. That said, Microsoft did sit on the license for quite some time – they casually announced theyâ€™d gained the South Park rights at E3 2008, but it wasnâ€™t until Comic-Con 2009 that the first details were revealed.

Not only did Microsoft seemingly struggle to figure out a use for license after purchasing it, but Wikipedia also suggests they didnâ€™t know what to call the end product either. South Park: Suck My Balls and South Park: Snowballin’ – a reference to a dirty, dirty, sex act (or so weâ€™ve been told) – were deemed too crude, while the Japanese-sounding South Park: Baru Baru Suki Suki was seen a little too obscure. Letâ€™s Go Tower Defense Play! was finally settled on, due to the gameâ€™s anime-inspired look. Some fully intended â€˜Engrishâ€™, there.

The 2D tower defence game went down well with fans and critics alike, with many citing it as a brilliant use of the license. With Trey Parker and Matt Stone providing the voice-work, you certainly couldnâ€™t fault it for authenticity. An assortment of unlockables – including clips from the show – rounded the package off nicely.

From a good use of the license, to a bad one. This 2D platformer could have had just about any cartoon slapped onto it. At least the plot did have a degree of originally – it sees Cartman and chums out to retrieve their stolen Xbox 360 hard drive.

To save having to endure LA Noireâ€™s cut-scenes again, Cartman travels through time to fight Tenormanâ€™s robotic army. Tenorman is, for the uninformed, Cartmanâ€™s much detested half brother. Even though a simple 2D platformer, the camera often struggles, forcing the player the make â€˜leaps of faithâ€™ time and time again.

Not even an appearance of ManBearPig could save it.

For fans especially, The Stick of Truth has been a long time coming. Make that a ridiculously long time – the first press release mentions a â€˜fall 2012â€™ release date.

That delay has been for the utmost best – when Ubisoft purchased the rights, they were under the impression that it wasnâ€™t too far from competition. Turns out that was a huge exaggeration. With THQ in trouble at the time, we wouldnâ€™t have been surprised at all had the publisher released it in an unfinished or blatantly rushed out state. In fact, we firmly believe that would have been the case. Under Ubisoftâ€™s care however, they have been able to give Obsidian the time, ergo money, to fulfil Trey Parker and Matt Stoneâ€™s vision of a fully authentic South Park RPG. We dare say that the relatively simple 2D art-work has worked in the gameâ€™s favour – had the art direction been any different, it may have started to show its age or signs of a prolonged development.

Prior to picking up the rights from THQâ€™s software fire-sale, Ubisoft had reportedly wanted to get hold of the South Park license for some time. Why they didnâ€™t acquire it during the nine years between South Park Rally and Letâ€™s Go Tower Defense Play! is beyond us. Thatâ€™s the videogame industry for you – sometimes it makes less sense than your typical South Park episode.