Sandlotâ€™s budget-priced shooter series has been called â€˜the videogame equivalent of a B-movieâ€™ so many times that itâ€™s dangerously close to becoming a clichÃ©. When the first EDF was released on PlayStation 2 – under the guise of Monster Attack in the west – itâ€™s true that the comparison was more than fitting. The assortment of super-sized enemies is mostly formed of ’60â€™s horror film-style giant insects, while dialogue is beyond the realms of cheesy.

Over time though the EDF games have evolved, right up to the point where itâ€™s clear that great amounts of both time and money are being spent on development.

This is easily the most impressive looking instalment yet. The fully destructible environments are surprisingly detailed while the vastly overpowered weaponry results in the screen being frequently filled with pretty explosions. Perhaps calling it the videogame equivalent of a Michael Bay film would now be fairer?

For the record, we failed to bond with 2011â€™s Insect Armageddon. It saw US studio Vicious Cycle take the reins, and despite encouraging previews, the series was ultimately steered off track. Thankfully EDF 2025 sees the series back in the hands of its Japanese creators, who have built on the foundations of fan favourite EDF 2017 to create something to suit newcomers and battle hardened fans alike.

The differences between character classes are remarkably defined, with each class having their own pros and cons. Whereas any character could use vehicles before, now only two classes have the ability to summon and use them.

Thereâ€™s also a new jet-pack equipped Wing Diver class which requires a degree of skill to get to grips with. Their weapons are either plasma or laser based and linked to the jet-packâ€™s energy supply. Spend too long in the air and youâ€™ll find youâ€™ll have no resources left to gun down enemies once you finally land back on the ground. Fencers can carry four weapons at once to provide heavy fire-power but are crippled by a slow pace, while Rangers remain the good all-rounder. Unsurprisingly, theyâ€™re recommended for newcomers.

It’s also recommended to alternate between classes. Essential, even. We spent 8 hours levelling up our Wing Diver only to face a new robotic enemy which we couldnâ€™t even make a mark on. In a flash the single-player mode became a gruelling slog, presenting us with the choice of either replaying earlier missions in hope of unlocking a new, more powerful, weapon or finding other players online to complete the level co-operatively. A no brainer, really. 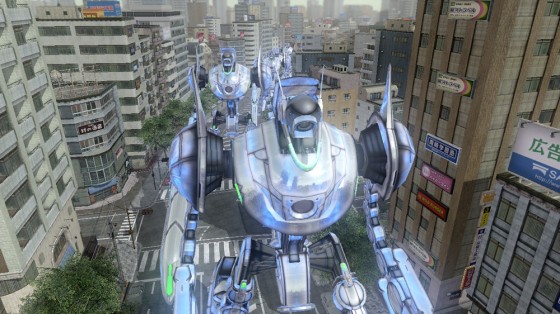 Indeed, for those going in alone this is hard to recommend. Even on the default â€˜normalâ€™ difficulty level it becomes too challenging for its own good from an early stage, with difficulty spikes appearing sporadically. To elaborate, there are 85 missions to play through – a number that far precedes that of its predecessor – and we found an awful lot of players asking for help with missions in the mid-thirties.

Online play is the saving grace

It’s not uncommon for missions to last a good 20 minutes when battling on your own, and there are no checkpoints to speak of. Accidentally getting caught in your own grenade’s blast, or finding yourself with the incorrect weapon type during the final assault, can be infuriating. It really is critical to check, and then double-check, loadouts before starting a mission. The last thing you want is to come up against flying drones (or similar) while armed only with grenades or a laser lance.

Experimenting with different weapons – collected during missions and only unlocked if a mission ends successfully – does provide some variety, but sadly not enough to keep things interesting while slogging through the campaign. Each character class has 175 weapons to play around with – bringing the total up to 500 – but they vary only slightly from other weapons of the same type. Many have such a slow rate of fire that theyâ€™re pretty much useless.

And although there is an admirable variation between environments – varying from wooded groves to built-up Japanese cities – they are reused on rotation, with most missions featuring just two or three different enemy types. A select few even less – one beach-based mission entails fighting off waves of red ants and nothing more. Sending several skywards with one well placed grenade can only make you grin so many times.

Online play is the saving grace here. EDF fans are seemingly a dedicated and loyal bunch – so much so that we found many would stay and play through several missions in a row, rather than just playing one or two and quitting as soon as things became tough. Pre-written sentences – selected via the d-pad during play – allow other players to be praised, thanked or alerted to danger with ease. Tactics can also be called out in addition to asking for help when downed.

Retaining the seriesâ€™ infamous silly streak, itâ€™s also possible to break-dance and perform other pleasingly daft animations in front of others. Get a strong team together and EDF 2025 really shines. Completing challenging mission feels no less of a well deserved victory with three others than it does if on your own.

Moments of victory against incredible odds make it a game hard to dislike. Finally destroying a screen-filling UFO after several attempts is satisfying; the action relentless if nothing else. However, itâ€™s well worth remembering that what somebody may consider relentless, another may consider repetitive. EDF 2025 walks that fine line like no other instalment has before it, but the fact that it sees the series back in the hands of its creators is likely to be a good enough reason alone for fans to open their wallets.