With the beta underway – and currently available to all, in order to test server stress – you donâ€™t have to stray far on the internet to find previews, hands-on footage, or anything else deemed newsworthy about Titanfall. Not that much has been said about the twelve player limit, however. Or to be more exact – that this limit actually works in the gameâ€™s favour.

We arenâ€™t the biggest multi-player fans in the world, dabbling only when mood takes, but even we felt slightly dismayed upon hearing about the 6 vs. 6 player limit.

Shouldnâ€™t the Xbox One, with all its newfangled technology, be able to cope with more than a dozen players shooting each other at once? Yes. And not for one second do we doubt that it can. Titanfall isnâ€™t your typical shooter though, and that limit is a clear design choice rather than a technical one. 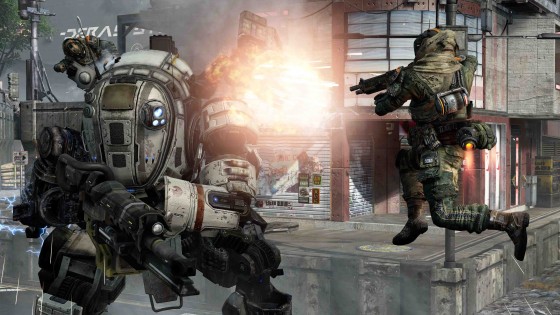 The general pace is faster than Call of Duty and the maps slightly larger, plus the ability to double jump and climb over just about every obstacle allows the war-torn environments to be traversed with both speed and grace. Moreover, if there is a respawn period to wait between deaths then we didnâ€™t notice it. With players constantly respawning without penalty or delay – coupled with the carnage of whatâ€™s going on around you – youâ€™d be pushed hard to even notice that youâ€™re fighting alongside just five others.

Then there are the titular titans, which can be summoned into battle at a location of your choice. Itâ€™s even possible to have them drop right in front of your very nose if you so desire. The titans, obviously, offer greater firepower, as well as the ability to trample any soldiers stupid enough to get under their feet.

Itâ€™s also possible to exit the titan at any time where itâ€™ll then enter â€˜AI modeâ€™, effectively adding another solider to the battlefield. Until somebody takes them out with one well-aimed missile, or climbs on their back for a spot of circuitry destroying rodeo, anyway.

Nevertheless, the ability to let your titan fend for itself is another reason not to worry about the player limit, allowing you to crack on with capturing bases and completing other objectives.

AI controlled troopers also provide something to unload magazines into. These squads of drones are frequently sent down to assist in battle, crashing to earth in metallic pods. As they tend to stay close to their fellow AI controlled team-mates, theyâ€™re usually found in close proximity to one another. As such, gunning down two or three in quick succession isnâ€™t a rare occurrence. Although you only receive 50XP per kill (compared to 100+ for killing a human player) their presence is just one of the many distractions on show, giving the experience a pleasingly chaotic feel. 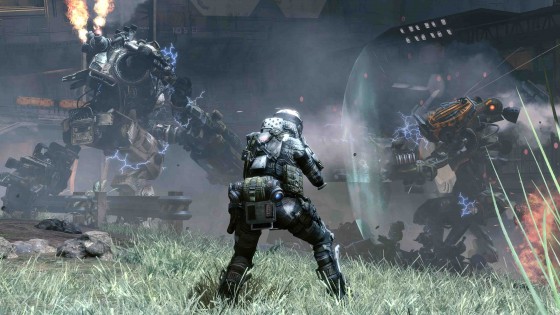 To elaborate, the sight of two or three titans â€˜duking it outâ€™ literally is that – quite the sight. Now imagine if there was, letâ€™s say, eight titans backed up in a street, punching one another in the back of the head. Come on now, really imagine it. A daft sight, no?

If there is a downside to the player limit, itâ€™s that you do end up seeing the same player names flash up on screen time and time again. A small gripe in whatâ€™s looking like a resoundingly robust shooter, albeit one with some highly desirable ‘mechs appeal’.