Logic dictates that World of Tanks has no right to be a good game. Tanks are slow and cumbersome. They take an eternity to reload, firing one shot at time. Unappealing on the eye, they lack the refined curves of a sleek sports car; their engines chug and stutter instead of purring. And although we canâ€™t vouch for certain, chances are they smell something chronic inside. Itâ€™s not as if somebody can crack open a window following an â€˜eventfulâ€™ near-miss.

Sticking two fingers up to good old logic, World of Tanks takes the tolls of controlling a graceless metal monstrosity and utilises them to create a compelling and curiously addictive experience.

Itâ€™s an intelligent game of tactics and nuances, designed around both experimentation and teamwork. Maps may be few in number but theyâ€™re surprisingly large. So sizeable, in fact, that the opposition often doesnâ€™t show up on the radar until a minute or so into battle. Itâ€™s while slowly trundling along the rugged landscapes that itâ€™s wise to start planning your approach. The layout of the land, projectile reach and your alliesâ€™ location need to be taken consideration before even thinking about engaging with the enemy.

Rush in without at least a rough plan of attack and you’ll be on the scrapheap in no time. That’s no exaggeration – one life is all you get. That means no respawns. It is possible however to go back to the garage hub and join a different battle with another tank. XP and silver – the main currency – are then duly awarded once the previous battle has ended. Those wanting to stay the duration can help surviving players by highlighting enemy locations. It’s a thoughtful set-up. 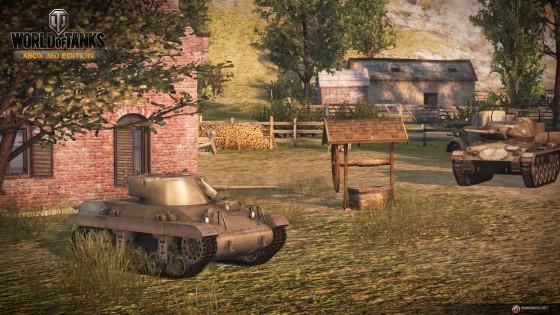 Because just one chance at leading your team to victory is all you get, remaining undetected by the enemy is critical. Essential even. Moreover, every single shot needs to be aimed with precision. Fuel tanks can be ruptured, ammo racks destroyed and treads ruined to the point of turning foes into sitting ducks. When aiming it’s essential to pay attention to the colour coded cursor which indicates chances of penetration. Even more so when using special penetrative ammo, which costs a small fortune.

Heavy tanks move slowly but are protected by strong armour and can fire from great distances, while light tanks have a reduced scope but can travel significantly quicker.

When engaged in fire-fights with heavy units, in the time it takes for their turret to turn itâ€™s possible for smaller units to fire, reload, and then be ready for another assault. Shots from artillery units – aimed from an overhead view – are most devastating of all but this vehicle type suffers from poor accuracy and slow aiming speeds. Then there are the self-explanatory â€˜tank destroyersâ€™ to play around with.

An intelligent game of tactics and nuances

Units are categorised by nation (UK, USA and German) with a small selection of basic tier 1 tanks ready and waiting in your garage from the outset. Additional units are then unlocked from a branching skill tree, each requiring resources to be spent on research.

An experimental streak lies within putting new units to the test, and going by the variety of vehicles on the battlefields fellow players are keen to discover the pros and cons of each. We also noticed some unprecedented teamwork on show such as two or three players hanging back at the base to prevent it falling into enemy hands.

A bar along the top of the screen indicates what unit types are left on the battlefield, as well as how many, so you always know what youâ€™re up against. When a base has been captured – or all enemy units are destroyed – the match is over. Oddly, this is the only match type. With two different ways to win though, it’s not quite the problem it may sound. 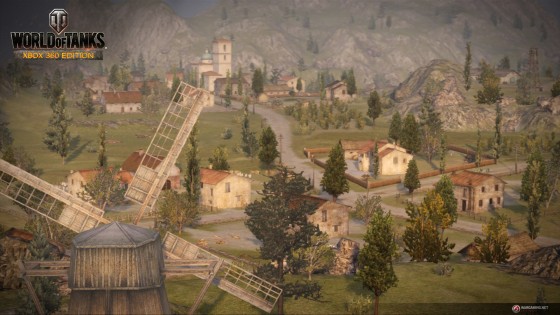 It also helps that each map has something to make it stand out, be it a mountain range full of winding paths or an incredibly grand looking bridge that seemingly goes on for miles. Trees, bushes, buildings and rocks provide cover, while the camouflage upgrade assists in â€˜going off the radarâ€™ entirely.

These upgrades cost a mixture of silver, XP and gold, as do the aforementioned special ammo packs. Curiously, some XP can be used only towards upgrades for the tank it was gained with, while ‘free XP’ can be spent how you please. Gold however can only be purchased via â€˜real moneyâ€™ with bundles priced between Â£4.99 and an eyebrow raising Â£69.99. Itâ€™s also possible to purchase a premium subscription using gold that doubles XP and silver for certain periods. Like the majority of free-to-play titles on Xbox Live, micro-transactions arenâ€™t shoved in your face in at all, purchasable only from the garage hub and – somewhat thankfully – not during battle.

We dare say that some may be surprised to learn that there are no annoying prompts to upgrade your arsenal via IAP, and never did we feel as if we had to spend money to improve our chances. Currently itâ€™s an acutely even playfield, although only time will tell though if the battlefields will eventually become dominated by experienced players. Weâ€™ve seen the occasional show off now and then, covered in expensive camouflage paint and emblems, but thatâ€™s to be somewhat expected. Virtual ‘willy waving’ is the bane of online gaming.

Despite being both polished and tightly balanced, World of Tanks: Xbox 360 Edition isnâ€™t going to please everybody. Some will find the pace too slow; others may complain that battles are too often anti-climatic. Although these are valid criticisms, itâ€™s still hard to think of another online shooter of recent times thatâ€™s as rewarding as this one. Some patience is required, but if you’re willing to experiment with the different units and learn their nuances, youâ€™ll find the rewards are tenfold.