Back in the â€˜90s, Bullfrog was one of the biggest names in PC gaming. Theme Park, Theme Hospital, Magic Carpet, Syndicate and Populous became instant classics overnight, but it was Dungeon Keeper that turned the fantasy genre upside, making the player the bad guy instead of the hero.

The game’s tag line â€œIt’s Good to be Badâ€ was no lie; the demonic â€˜God simâ€™ claimed uncountable hours of our youth, planning routes to gold veins to keep our minions happy, digging out what must have been realistically tonnes of rock to make rooms for new monsters to move in, work, build, research, work out in and eat in, all for the sake of protecting the dungeon from heroic invaders coming to take us out.

Upon hearing that EA had a Dungeon Keeper revamp in development, we desperately wanted to discard more countless hours into what we hoped was going to be a modern re-imagining of our favourite game as a teen.

What we were left with was disappointment and resentment. 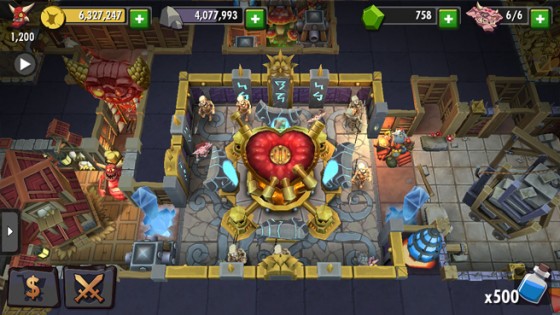 The main premise is the same – you create and defend a dungeon. Due to being a total overhaul rather than a remake however, thatâ€™s where the similarities end.

The demonic advisor in the original has been replaced by a questionably effeminate Horned Reaper, who asks you to call him â€œHorny Reaperâ€ or â€œHRâ€ (human resources – EA made a funny!), but rather than growling at us that our minions are deserting, he tells us certain actions have now completed in a voice we’re pretty sure is the father from Peppa Pig.

Irritatingly, everything is a time based action now. From digging out rock and upgrading rooms which can take a few minutes, to mining for gems which sometimes takes an entire day; everything is timed.

Building is now no longer reliant on cash flow alone, but rather a mixture of gold and rock, and therefore you now have quarries. They provide a steady income of both over the course of the day, maxing out and providing no more until you’ve collected what’s there. There are also objectives to complete for a small reward. Most of these will unlock throughout the course of the game.

As a free-to-play release, in-app purchases do unexpectedly feature. And they’re frustratingly predominant. Gems are the premium item, available by digging them out for low return, or buying. Unfortunately gems are a necessity, especially if you want more than two imps to slap about, since buying them with gems is the only way to get more. In our vast experience, you could never have too many imps to slap. Actions are also completed faster by using gems.

Slapping imps to make them more efficient is still something you can do. One slap increases their efficiency by one hundred percent for thirty minutes, though we don’t really notice a huge difference. Things don’t seem to complete any quicker from what we can tell.

An odd addition this revamp is the inclusion of PvP invading. You can block your dungeon from becoming invaded for a time, if you’ve paid in gems to do so of course; so rather than fighting off AI enemies and heroes; you’re now trying to fight off other players. These events seem to happen randomly. If you win, you gain resources. If you die, you lose them. There are also time based events in which you can summon your creatures and take on waves of enemies for increasing reward.

Perhaps all the above could be forgiven if the app would…just work. Countless crashes, and quit outs left us frustrated. One update actually changed the look of the dungeon, simplifying it, and therefore taking out some of very little appeal the game actually has, and other updates have done little to fix the crashing issues. 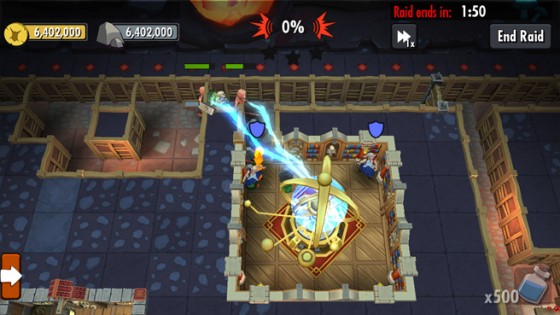 From the very outset, Dungeon Keeper finds itself living under a very large shadow, created by a monster of a cult classic. Expecting it to be anything like the original will surely leave the user disappointed. Taken as the blatant and callous cash-in that it is, we’re happy to leave it in the capable hands of a mistress to be whipped for eternity.