It doesn’t happen often, but every once in a while, a stinker of a game comes out which makes you consider whether there was a joke involved somewhere.

Unfortunately, Airport Simulator is one of those stinkers. Developed by Actalogic and published by UIG Entertaintment, both companies have their roots firmly planted in simulation games, and are somewhat well loved in Europe. However, this doesn’t seem to work in their favour this time around. 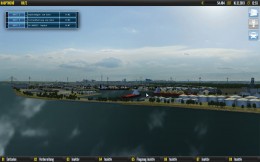 The grand dreams we had of running our own airport were prematurely smashed into the tarmac when we first tried launching the game. After some research, this was apparently a common occurrence, and one which was even patched, yet still rendered the game temperamental at best. Once we finally managed to get playing, we began what we thought would be the life of an air traffic controller, directing planes to land, and chatting up suave roguish pilots.

In reality, we were now the new managers of a failing airport, tasked with bringing operations up to scratch from the ground up. We were providers of airport services. The issue was, where to start?

With no tutorial, other than a brief welcome message, we were left to manage entirely on your own. And with no planes coming in to land, we were left scratching our heads trying to figure out if we should be doing something. 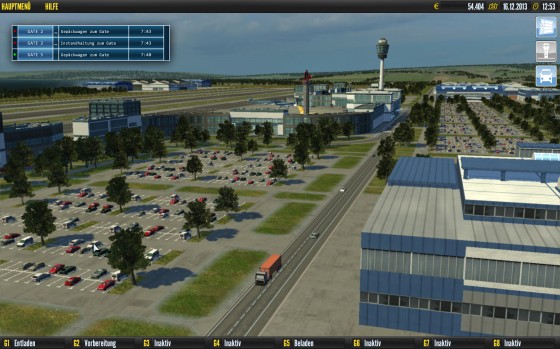 With a paltry amount of in-game currency to start, which was useless at this point anyway, it was time to upgrade some vehicles; which were not only the mode of transportation in the game, but the only thing we had any control over. And control is a questionable term at best.

Driving was not simple. You could easily find yourself struggling to drive in a straight line, often veering off at strange angles, or in entire circles. It’s astounding really, when we consider it may have even been easier to get everywhere via unicycle. This isn’t so much an airport simulator, as a driving around an airport simulator.

Finally the first plane came in to land, and our first objective popped up, which was to launch the ramp. Hidden away at the bottom of the objective box, was a ‘launch’ button, and after we finally got the mouse pointer to touch base with it, we were off. After a bit of readjusting the camera view and driving the vans into the glowing point on the ground. It was a feat. It was a feat of patience, and skill, and it was honestly a feat to keep playing at this point. 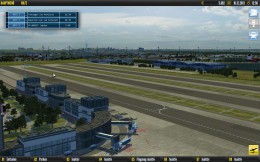 Once that was in place, we had to skip to all the other various vehicles required to retrieve passengers and their luggage, repair, clean and maintain the plane. Each with their own in-game timer to do it by, some of which were upwards of fifteen minutes. Thank goodness, because while the controls were difficult at best, the vehicles themselves were heinously slow.

Each successfully completed task earns a small sum of money. That money then goes towards automating the vehicles, so you don’t have to spend your time shuttling everything around yourself. The main problem was staying interested enough in the game to want to. 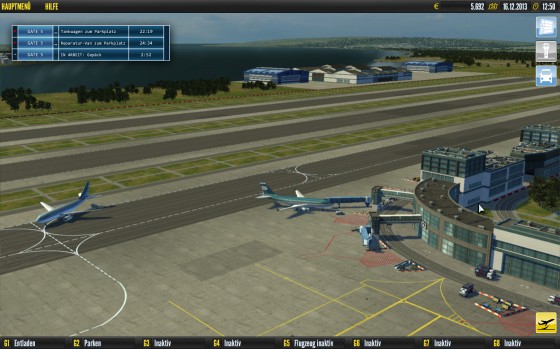 With difficult controls, no storyline beyond the basic need to upgrade everything in sight, and way points all but impossible to find, this is a game that is more complicated than it has any reason to be.

Respectfully, we can’t see this flying off the shelves, and if the comments on the Steam page are anything to go by, this game has already crashed and taken many unwitting and angry souls with it.