Originally intended to help Microsoft get Windows Phones and Surface tablets out of their warehouses and into gamerâ€™s hands, twin-stick shooter Halo: Spartan Assault makes its final pit stop on Xbox 360 after launching on Xbox One last month. Usually we disapprove of mobile games being converted to console, but considering it has been a while since the last top-down shooter graced XBLA, we can make the exception. We also imagine the fact that the Xbox actually has a pair of twin-sticks works massively in the gameâ€™s favour.

Set between Halo 3 and Halo 4, the far from dramatic opening reveals Spartan Assault to be a virtual training program played by the UNSC marines during downtime. Now thatâ€™s Meta.

The thirty five historic battle simulations on offer are a surprisingly varied bunch, and with various score-based medals to unlock theyâ€™ve clearly been designed with replay value in mind.

Escort and protection missions feature predominantly, such as guarding a screen-filling troop carrier as it slowly makes its way over a bridge. The protection missions meanwhile entail keeping snipers and engineers safe while they carry out their duties.

Every now and then a mission will begin with controllable vehicles in close vicinity, which helps to add variety. Thanks to developer Vanguard continuing the seriesâ€™ fine line of eye-catchingly garish explosions, blowing enemy turret placements to pieces while behind the wheel of a colossal tank is incredibly satisfying. 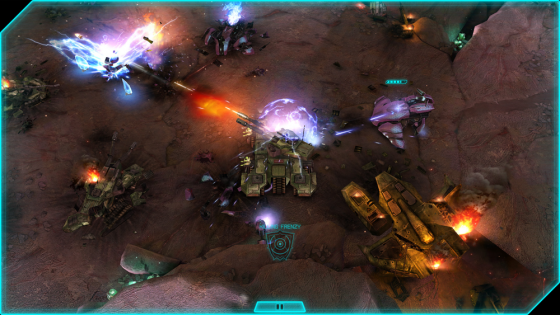 Given the genre, were expecting Spartan Assault to be both mindless and relentless, but itâ€™s actually quite challenging in places thanks to a slight strategic edge. Although weapons now have a faster rate of fire, the balancing between weapon types is similar to its first-person forefathers and the two weapon limit has rightfully been retained.

Swapping between weapons is crucial – the notoriously overpowered pistol remains incredibly effective against grunts while plasma weapons can swiftly drain enemy shields. Ammo is surprisingly scarce during some missions too; often prompting backtracking and making it wise to reserve heavy weapons for encounters with stronger enemies.

Loadouts can be changed between missions and it is here that XP can be spent on upgrades including shield and damage boosters. Itâ€™s worth mulling over which loadouts and assist abilities to take into battle as the correct choice can make progression swifter. The mission centred on assassinating Elite commanders becomes a whole lot easier with the active camouflage ability, which likewise proves useful for hijacking enemy vehicles on the sly.

XP boosting â€˜Skullsâ€™ – which work against your favour, reducing ammo drop amounts and such – can also be equipped for those up for a challenge. On the flipside, those struggling with certain missions can splash out on sniper rifles and missile launchers to make things easier, albeit at a huge cost. Itâ€™s disappointing to see Microsoft has added micro transactions to make these power weapons instantly obtainable, especially in light of the gameâ€™s slightly steep Â£11.99 price tag.

Indeed, the fact this was once a mobile game is apparent in more than couple of places. Visuals are patchy and generally unimpressive while speech suffers from heavy repetition. Its mobile roots are most predominant where mission length is concerned though. The majority last under five minutes and, presumably due to their briefness, there are no checkpoints. This is actually more of an issue than it sounds – thereâ€™s nothing more frustrating than being flatten by a Bruteâ€™s hammer with only a few seconds left on the clock. Due to the levels being small size it doesnâ€™t take long to learn layouts and weapon stash placements though, and so even the gameâ€™s toughest moments can be overcome by some careful planning ahead. 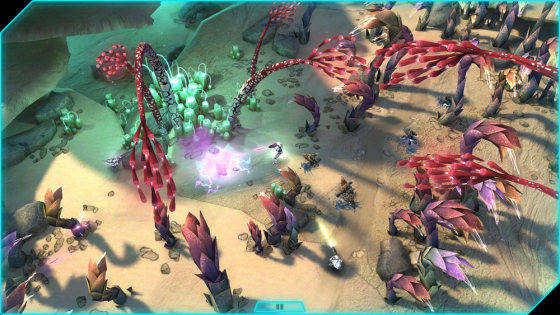 Whereas the main campaign sees the Spartans fighting off the Covenant Empire, the co-op mode reintroduces the parasite-like Flood. The main difference between enemy factions is that the Flood attack in far greater numbers. Thereâ€™s even a medal to earn for killing 50 with one well-timed fire-bomb grenade. The five co-op challenges steadily increase in difficulty, with the first being a simple task of survival. Itâ€™s the third mission thatâ€™s the stand out – a frantic dash through a collapsing cave to activate Forerunner technology, before legging it back to the extraction point within a tight time limit. Teamwork is critical here as players must activate doors and bridges for one another. Itâ€™s a shame that the other four co-op missions simply see yourself and a team-mate standing ground.

The aforementioned medals help to give the game some legs after the four-to-five hour campaign is done and dusted. Awarded for various feats in battle, there are 46 to gain in total including some obtainable only during co-op play. The achievements donâ€™t flow all that freely either, with most requiring missions to be played with certain skulls equipped.

We were under the impression that Halo Wars taught Microsoft a valuable lesson – if Halo is handed a studio unfamiliar with the franchise, the end result is a game that looks and sounds rather like Halo but has none of the heart and soul. This lesson appears to have been either forgotten or ignored, as thatâ€™s exactly what has happened here. Some nasty launch day crash bugs aside, itâ€™s varied and challenging enough not to harm the Halo brand, but nevertheless itâ€™s likely only battle hardened Halo fans will remember it in the long run.

Prepare to be mildly distracted, and nothing more.