Talk about an easy act to follow – the last RoboCop game was from the notorious Superman 64 developers Titus Interactive way back in 2003. The only thing you need to know about that game was that it was their last before going bankrupt.

Even if this mobile movie tie-in was a clone of Space Invaders it would have fared better. We joke, of course. This is actually quite an ambitious offering and a bit of a looker too. The destructible environments, although small, are full of detail with some fancy lighting effects thrown in for good measure. Fans of the movies will also be pleased to hear that it’s possible to equip Murphy in his original metal suit instead of the new rather rubbery looking outfit that offended fans when first shown.

What we have here is a third-person cover based shooter with bite-sized missions lasting around five minutes each. Controls have purposely been kept simple – RoboCop automatically moves from one location to the next when all enemies are defeated, leaving the focus on hot footing it from one piece of shrewdly placed cover to the next via a simple tap of the screen. Aiming and shooting is likewise intuitive.

Changing position not only occasionally gives a better view of the battlefield but also prevents snipers from locking onto your location. It can also make it easier to find targets – they have a slightly irritating habit of hiding behind wooden crates and boxes like a bunch of cowards.

Another way to help even the odds is to scan the environments. Not only does this temporarily show all enemy locations, but also weak points during boss battles. Every now and then an enemy will appear on the battlefield that has to be scanned so that they can be captured, adding a nice little cash bonus as a reward. 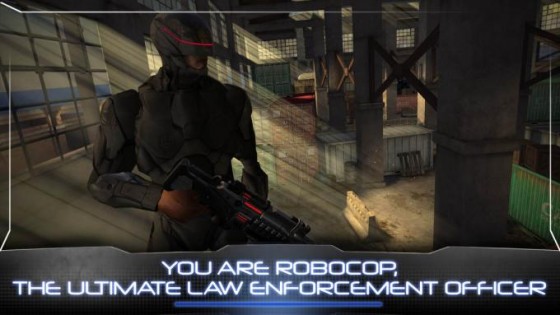 The majority of missions reward with credits – used to upgrade weapons and Murphyâ€™s health and focus skills – while other missions earn research points that can be gambled to unlock bonus upgrades. Upgrading weapons to their full potential is an incredibly slow process – damage amounts are increased just one or two percent per upgrade.

Thankfully this doesn’t rob the game of a sense of progression as any improvements made are clearly notable during battle. Over time RoboCop becomes a quicker, stronger and deadlier killing machine. Later itâ€™s even possible to send in attack drones to “give the man a hand”.

Being free to play, in-app purchases do unsurprisingly feature. Never are they nagging though – gold bars are the purchasable currency, used mostly to buy extravagant weapons such as rail guns and mini guns.

Gold can be gained by levelling up too, but only a few bars at a time. So few, in fact, that thereâ€™s barely any use for them. Like most mobile games an energy system is in place as well – each mission drains part of RoboCopâ€™s power reserve. Again, this system is fairer than most as several shoot-outs can be played before becoming depleted.

Nicely presented and satisfying to play, RoboCop is a pretty typical shooter but one that has been perfectly designed to suit mobile devices. Originality is hardly a high point, but what it does it does well.