Following on from last weekâ€™s review of Pac-Man and the Ghostly Adventures and this weekâ€™s lookback at Pac-Attack, it seems fit to focus this monthâ€™s eBay round-up on Pac-Man. 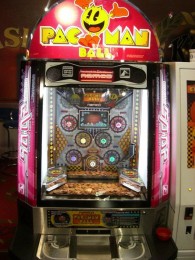 Unsurprisingly, a Pac-Man arcade cabinet is the highest valued Pac-Man item to have sold on eBay recently. Itâ€™s not the original Pac-Man arcade game though, but rather a Pac-Man Ball â€˜coin pusherâ€™ machine. The neat thing about this cabinet is the little TFT flat screen in the middle, which is used to play a clone of of â€˜Bust-A-Moveâ€™ – when coins pass through certain places on the table Pac-Man will fire a coloured ball. If three a matched up a bonus is earned. Incidentally, weâ€™ve never seen an arcade owner fill one of these machines up with 2ps before – theyâ€™re usually loaded with 10p or 20p coins. It sold for Â£840.

An auction from the US next. This unused Pac-Man joystick watch from the early â€˜80s fetched $449.99 (approx Â£274.20). Joysticks were changeable with each colour relating to a different ghost, including Pinky (pink), Blinky (orange) and inky (blue). It does appear that one joystick is missing, but nevertheless itâ€™s a nice little item. An unboxed model sold for Â£155 even though the strap appears not to be the original.

Two boxed Pac-Man 30th anniversary Zippo lighters sold for similar amounts – Â£199 each. One featured a depiction of the game in play, while the other a large embossed golden Pac-Man. 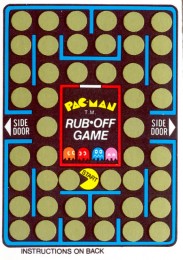 Three boxes of unopened Fleer Pac-Man/Ms. Pac-Man stickers and trading cards sold for Â£243 – or thereabouts, anyway – the auction ended as a â€˜best offerâ€™. As well as standard stickers and trading cards featuring Pac-Man and his ghostly cohorts in various poses and situations, some cards were coated in scratch off foil and could be used to play an impromptu game of Pac-Man. Dragonâ€™s Lair was given the same treatment with similar â€˜rub offâ€™ cards.

The seller of this sealed box of 24 Pac-Man Valentine’s Day cards wasnâ€™t quite as lucky as not one soul was tempted to have a bid. â€œFor girls, boys and teacherâ€ reads the front of the box.

Despite being far from trash, this bright yellow Pac-Man trash can also failed to find a seller. Â£45 was the original asking price. A reasonable price seeing that the seller notes there are no dents and the paint is as vibrant as it was when new. A trash can with a different design – and seemingly in worse condition – did however manage to sell for Â£30.

The next item is quite common but remains desirable – the Pac-Man board game, as featured during Charlie Bookerâ€™s recent â€˜How Video Games Changed the Worldâ€™ program. A new and unplayed set ended at Â£36 on a Buy it Now auction. 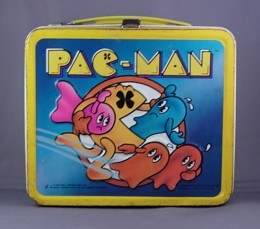 Taking Pac-Man to lunch with you wouldnâ€™t be wise These Pac-Man lunch boxes are however pretty neat. A worryingly rusty looking metal tin Pac-Man, with matching Thermos flask, ended at Â£24 while a plastic box featuring artwork from the Pac-Man cartoon sold for Â£30.

How about some actual Pac-Man games to round off this round-up? A â€˜Pac-Man 2â€™ LCD game from 1981 ended at Â£26, a Tomytronic Pac-Man tabletop for Â£23, an excellent condition copy of Pac-Man on NES for Â£39 and a factory-sealed copy of the oft-forgotten Pac-Man World on PSone for Â£32.

Right, that’s enough about Pac-Man for a while.