Prior to the release of The Walking Dead we werenâ€™t sold on the idea of episodic gaming. The thought of being drip-fed a story over several months seemed alien, but from as early on as the second episode Telltale managed to twist our arm.

Each episode was more ambitious than the last, and as each drew to a close we were left feverishly wanting more.

Successful spin-off 400 Days – which further illustrated how far Telltaleâ€™s story telling skills have come – provided a small taster of what to expect here in season two, which makes the unexpected move of making Clementine the lead character.

Although young, Clem has faced horrors untold and is now both wiser and feistier because of it. She carries a pistol and is incredibly aware of the dangers that lurk around every corner. Indeed, sheâ€™s a very different person from the timid little girl we were introduced to. We even see her disregard a box of childrenâ€™s toys as if they were trash. What a difference a zombie apocalypse makes. 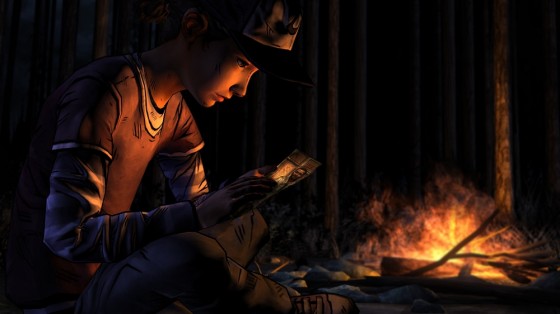 The story carries on immediately after the events of season one, with a short recap available for those who need a memory jog.

Omid and Christa are still looking after Clem. Or at least, to the best the pair can manage considering that Christa is heavily pregnant. Itâ€™s then not long after being re-introduced to the surviving characters that Clem finds herself alone. Cold and hungry, sheâ€™s forced to brave the great outdoors all by herself.

It’s a decent opening that manages to grip within minutes. It also provides a reminder as to how bleak the world has become. These are desperate people doing whatever it takes to survive.

Even after finding an abandoned camp site and a new canine pal, Clemâ€™s luck fails to improves until she eventually meets up with a pair of survivors. When introduced to the rest of the group though – who have taken shelter in a remote cottage – trust issues soon surface, making her feel rather unwelcome. A few select members of the group even believe that sharing valuable supplies with her would be foolish, prompting a choice of who you should try and reason with. 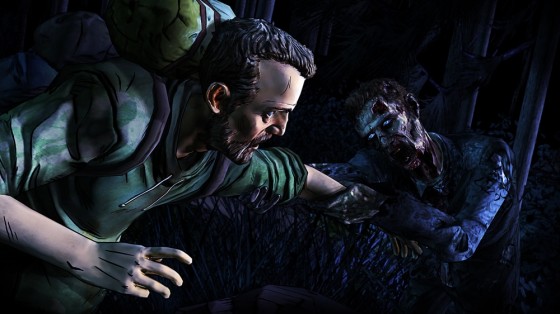 The pace slows down considerably for the second half of the episode. A section set during nightfall sees Clem creeping around the cottage while eavesdropping and remaining undetected. This is in order not just to learn more about the survivors, but to find supplies vital to her survival.

It was while sneaking around that we really started to appreciate the amount of work put into sound design. The noise of pouring rain outside helps to provide a sense of atmosphere, while Clemâ€™s pounding heartbeat makes tense moments even more nerve-wracking. Incidentally, presentation is slightly more polished this time round while the interface has been tidied up. You can also rest assured that there are no clumsy first-person shooting bits or such which Telltale has experimented with before.

Due to ending sooner than expected, All That Remainsâ€™ following conclusion is hardly fitting of the word ‘epic’ but it does set the story up nicely for the next episode.

Hopefully we’ll find ourselves rooting for the group’s survival by the time the second episode ends. Although new survivors may all have their say about Clemâ€™s arrival, they remain an unknown entity with very few given more than a couple of minutes in the limelight. As such, they currently don’t appear quite as likeable as Kenny and the other survivors left behind in season one.

We also hope to see more signs that Telltale’s talents aren’t being spread too thin – the developer is also currently working on episodic stories based on The Game of Thrones, Borderlands and The Wolf Among Us alongside this second season. A sense of over familiarity didnâ€™t manage to wholly convince us that this isnâ€™t the case, but thereâ€™s still plenty of time to build on the sturdy groundwork All That Remains provides.