You may be relieved to hear that we believe chances of Activision eventually releasing this kart racer on consoles are pretty slim. At least not as a full price retail release, anyway. This is a racer so heavily structured around microtransactions that if you were to remove them the entire thing would fall to pieces, leaving nothing more than a colourful husk. 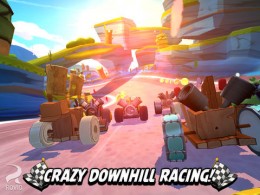 You canâ€™t even browse the kart store without being prompted to insert your password to confirm a transaction, and because of this itâ€™s very hard to look upon it in anything less than a cynical fashion.

Letâ€™s start with the title screen, of all things. There are options to scan codes from Angry Birds Jenga in order to unlock mini-games, as well as a screen for the Skylanders-style TelePods toys which are used obtain new vehicles. Then there are the usual requests to connect to Facebook and such to share high scores, but these are less bothersome. For better or worse, weâ€™re now used to seeing them in almost every single mobile game.

The option to permanently double winnings from races and the chance to buy more bags of cash whenever upgrading a vehicle are less easy to ignore due to being shoved in your face. Make no mistake – Rovio has designed this with shameless promotion in mind, and no doubt half-a-dozen power-ups sponsored by renown brands are already in the pipeline. 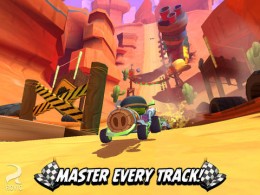 The racing career starts with just one racer – the somewhat iconic red bird – and a rickety old wooden kart. By collecting coins all aspects – from speed to strength – can be upgraded, each time increasing the kart’s â€˜CCâ€™ slightly. Some events require a certain ‘CC’ rank to partake, and this is where Angry Birds Go steps away from being a typical kart racer – each stage has five tiered events set on just one track. In other words: the same tracks have to replayed over and over again.

Thankfully they have been designed with on-the-go-gaming in mind, and each event only takes around a minute or so to complete. Track design also fares well despite shortness, full of ramps, slopes and tight bends. Some have additional paths that unlock depending on event too, which range from standard races to fruit smashing contests.

Itâ€™s not long into the game that a second in-game currency is introduced in the form of gems. These are not just used to restore stamina after every five events, but to activate power-ups that are essential to winning races. Itâ€™s a good idea to have a stockpile put aside for the ridiculously tough one-on-one boss battles. 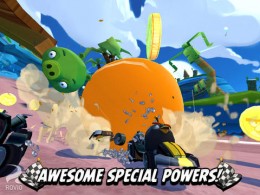 Each character only has one type of power-up in their arsenal, which does go some way to preventing this from being an outright Mario Kart clone. Another thing that prevents plagiarism is the control system. As mad as it sounds, the omission of accelerate or brake buttons is actually a smart move, setting the focus primarily on steering ergo coin collecting. Handling meanwhile has evidentially had a lot of time spent on it getting the â€˜feelâ€™ just right. And it does feel right.

Indeed, you can tell that a huge amount of both time and money has gone into development. The static cut-scenes are remarkably well drawn while the music is suitably jolly. And although a little scruffy, presumably to keep the frame rate up, the graphics are impressive.

Itâ€™s just a shame that Rovio are hell-bent on recouping that development cost by including every single marketing and microtransaction trick in the book.