News of a movie starring both Batman and Superman may currently be shaking up the world of cinema, but videogames featuring DCâ€™s most renowned duo are a common occurrence. If we take DC Universe on PS4 and the belated Wii U conversion of LEGO Batman 2 into account there have been no less than three games this year alone featuring both the Caped Crusader and the Man of Steel. That third game? Injustice, you forgetful so-and-so.

Not wanting to mislead, Batman and Superman sadly arenâ€™t playable in this top-down brawler. Their appearances are limited to cut-scenes, where they show up to provide support for the up and coming superheroes that form â€˜The Teamâ€™ – a ragtag bunch of teens, comprising of Robin, Nightwing, Superboy, Batgirl, Kid Flash, Aqualad and half-a-dozen others. Together they work alongside the Justice League, and addition to Bats and Supes, Aquaman and Green Lantern also make appearances during the early missions.

The amount of superheroes and villains present is admirable, especially when compared to High Moonâ€™s Deadpool – a game that featured an assortment of bad guys so minor that even the scriptwriters mocked their obscurity.

it makes X-Men: Destiny look like something from the far flung future

Bane, The Ridder, Lex Luthor and Killer Frost form part of the twelve-strong bad guy rooster here, brought together by a plot involving powerful mystical crystals spread all over the world. Cue one globe-trotting adventure, varying from Gotham City to wastelands of both the desert and Arctic variety.

Just a handful of characters are playable at the start with the rest unlocked either through progression or by finishing the adventure on the harder difficulty levels. Three can be taken into battle at once – two of your choosing and one pre-determined lead character that differs depending on chapter. All three can be swapped between at any time and each has their own upgradable super moves. The tutorial suggests creating a balanced team, but because most characters have both projectiles and wide-area attacks in their arsenal whom you pick matters very little. 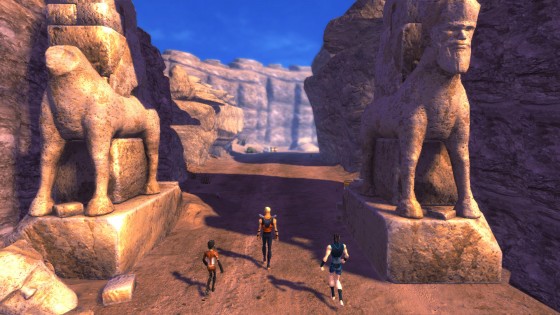 Featuring the talents of the cartoon seriesâ€™ voice actors, the cut-scenes are a clear highlight. Unfortunately, theyâ€™re the only highlight. Even though this was originally due out early 2013, it still feels unfinished due to a notable amount of glitches and the occasional game-ruining bug. We couldnâ€™t even get the arena-based challenge mode to load until we deleted the latest update to see if that would cure it. Amazingly, it did.

This is a pretty good example of just how amateurish and broken Young Justice is. Crispness aside it looks like something from the PlayStation 2 era – the camera is set so far back that everything, from the character models to the environments, is left looking featureless and bland. Then there’s the music, which plays on a thirty second loop and thus soon begins to grate.

Level design too is like something from the past, mostly formed of long dull paths and rooms containing nothing more than tedious block-shoving puzzles. In a vague attempt of inducing variety a challenge is imposed now and then, such as having to defeat numerous enemies with 90 seconds, but thatâ€™s about as diverse as things get. 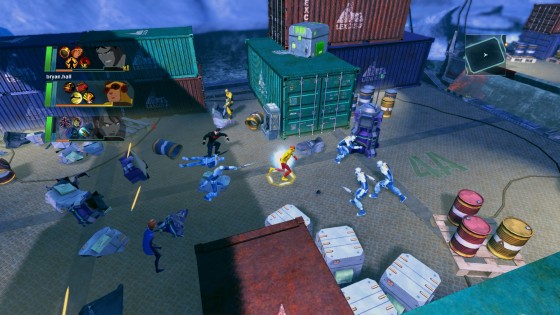 Itâ€™s the combat thatâ€™s the major downfall though, lacking…well, everything you’d expect a beat’em up to feature. Apart from some clichÃ©d speech samples thereâ€™s a curious lack of sound effects. Coupled with some iffy collision detection, their omission is something that goes a long way to making combat feel flat and unconvincing. Enemies react to your attacks in such a feeble manner that our heroes may as well just be tapping them lightly on the shoulder.

Unlike some recent licensed games, you can at least tell that the developers have an appreciation for the source material. Fans will no doubt enjoy the multiple-choice quiz found in the hub, and on an unrelated note we were surprised to find that it offers online co-op play. Good luck finding somebody to battle alongside though – over the course of a week we managed to find just one lobby open.

Appreciation is all well and good, but something the developers seemingly didnâ€™t have is the technical knowhow to create something worthy of the license. Honestly, it makes X-Men: Destiny look like something from the far flung future.