Instant gratification forms the core of the first NFS from Ghost Games. The opening tutorial is less about learning the ropes and more about showing off the perks of playing as either a cop or racer. Cops get a long list of high-tech toys intended for pursuits, while racers have their own assortment of gizmos along with a livery of curvaceous cars to cruise the long and winding roads of Redview County.

Whereas most racing sims make you work for their most alluring vehicles, usually starting off with a garage full of European hatchbacks, Rivals has an assortment of desirable supercars available from the outset. It speaks volumes about the developerâ€™s eagerness to please that every single one is as pleasurable to drive as the last. They hit top speed almost instantly, while the nitro bar refills at such a fast pace that it’s seldom empty.

Reckless drivers can rest easy knowing that most vehicles can withstand four or five crashes before becoming write-offs. Repair shops are placed so frequently on the map though that they rarely get to reach this state – driving through one transforms a vehicle back to mint condition in a blink of an eye, and with a restocked supply of â€˜pursuit techâ€™ to boot.

Indeed, great lengths have gone into ensuring you’re not kept away from tearing down Redview’s roads for long. Tyres even auto-inflate should you accidentally drive over a spike-strip.

If a rival gets away during a pursuit thereâ€™s no penalty as such. The chase is simply called off and thanks to a slightly abnormal amount of racers on the roads, it’s never more than thirty seconds-or-so until youâ€™re engaged in another high speed pursuit, leaping off ramps, triggering speed cameras, dodging roadblocks and smashing through scenery.

Pursuits can be highly enthralling, especially when playing against human opponents who have figured out how to counter offensive manoeuvres. Taking down AI opponents isn’t quite as engaging, although we were pleased to find that they occasionally give the slip by performing U-turns. 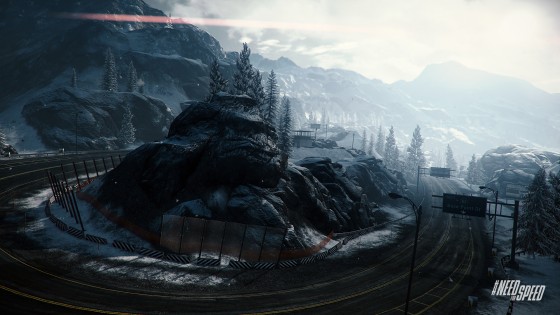 Redview’s terrain is pleasingly varied, ranging from snow covered mountains to a desert wasteland with more than a couple of canyons to leap. There are no urban environments, but that’s not an entirely bad thing seeing last yearâ€™s NFS was set in a bustling – if occasionally bland – city.

And every inch of Redview can be explored right from the outset. It’s a sizeable free-roaming online world in which other players are often seen going about their missions while you complete yours. There are no annoying prompts suggesting online races and such – youâ€™re free do as you please. Should you want to go â€˜head to headâ€™ other players though the ‘easy drive’ route master will pinpoint their location on the map.

Having to connect to EA’s servers to play does however pose two slight issues. Firstly, if the host quits then thereâ€™s a short period to wait while the server migrates. This can be quite annoying when halfway through an event. Secondly, there’s no way to pause the game. Push the â€˜start buttonâ€™ and a transparent map simply pop-up, while your vehicle can then be seen slowly grinding to halt in the background.

The map is a somewhat integral part of the experience, highlighting the locations of races, events and also the whereabouts of racer hideouts and police compounds. Itâ€™s from here that vehicles can be changed and personalised, and ‘pursuit tech’ arsenal can be selected. Only two of these can be equipped at one time, thus giving scope for both tactics and experimentation. They can be upgraded using XP also, although they ever become quite as flashy as we would have liked – when activating EMP shunt, for instance, it can be hard to tell if it has even triggered.

The pleasingly free-form nature extends to that of the mission objectives. Each chapter has a number of assignments of varying difficulty, ranging from gaining a gold medal in any event currently available – thus allowing you to pick and choose – to taking down a certain amount of rivals.

Other assignments can be completed on the fly, such as having to cumulatively drift a set amount of yards. The first few chapters are a total breeze – patronisingly easy, even – but soon become tougher as more aggressive racers with higher heat levels are introduced. To get both factions up to rank 60 will take a considerable amount of time.

NFS Rivals feels like it has been designed to bring together the best parts from the last few games in the series, along with an undeniable hint of the much celebrated Burnout Paradise. Those who played Hot Pursuit within an inch of its life may feel a slight sense of over-familiarity, but regardless of this, Ghost Games have still managed to make something that’s so effortlessly playable that it’s hard to dislike.

The space year 2014 may almost be upon us, but the spirit of â€˜90s arcade racers is still alive and well. Rejoice!